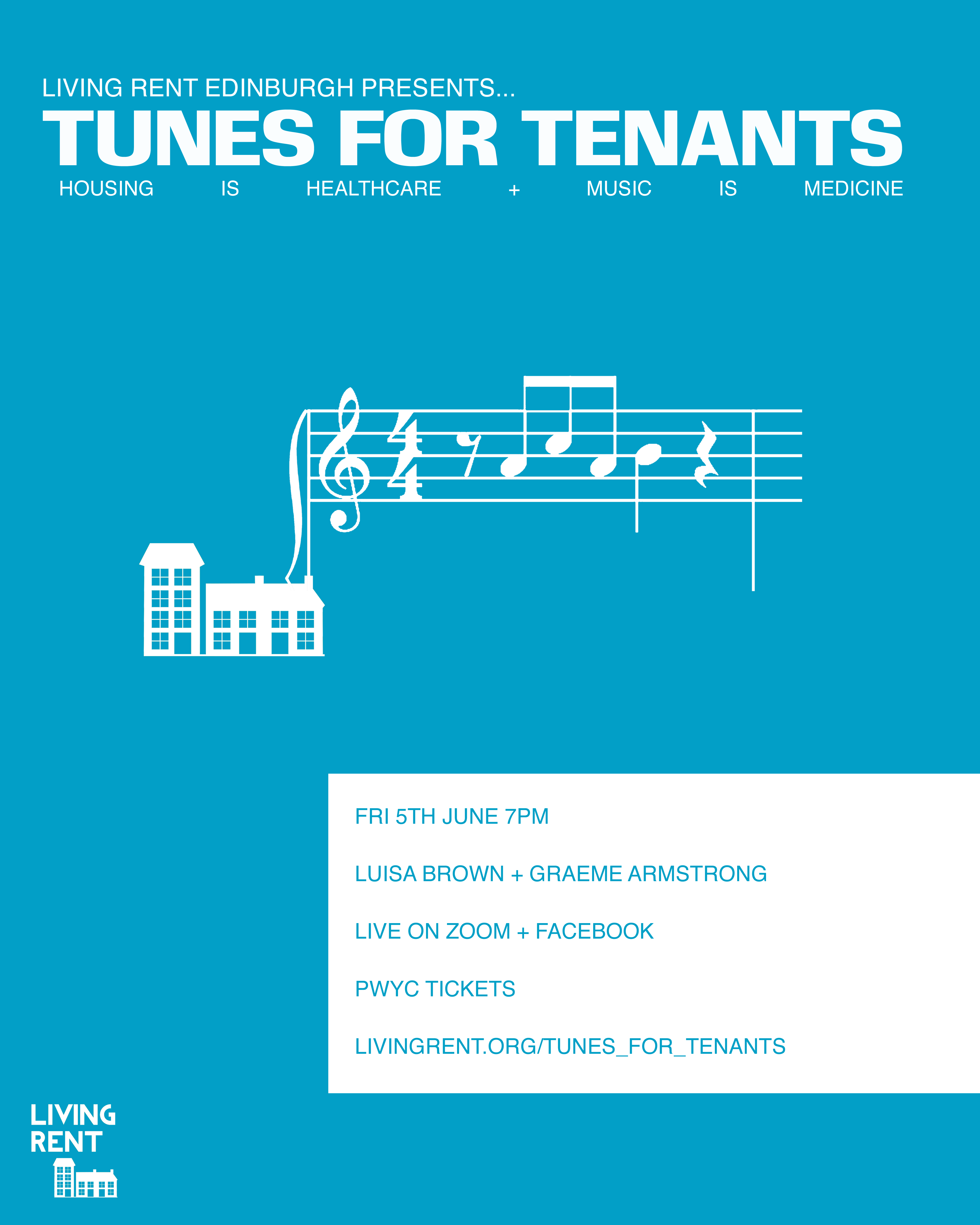 MUSICIANS ARE PLAYING ´TUNES FOR TENANTS´ IN JUNE

Members of Edinburgh branch have come together to organise a series of online gigs with musicians from across Scotland.

´Tunes for Tenants´ will be an interactive live concert presented by members in order to reach out to those who have not yet engaged with the union. Audiences are invited to view the event on either Facebook or zoom and to donate a fair ticket price within their means online.

Tickets available at the bottom by filling out your details. After putting in your details, it will direct you to the donation page. Please donate what you can. The day of the event we will send out an email with the relevant Zoom and Facebook Live links.

We can look forward to hearing from some of the best young trad musicians known to the Edinburgh folk scene, a badass Bluegrass band from Leith, the highly original indie song-writing of an adopted Irish Edinburgher, and the beautiful harmonies of an English protest folk band who call the city their home-from-home.

If you are a musician or promoter in Scotland and you are a member of Living Rent, please contact us for a chat about how to set up future gigs.

More about the artists playing on June 5...

Luisa grew up in a musical family in Edinburgh, playing the fiddle from the age of 5 and after school spent many years travelling around the world, learning music from different cultures in Europe, North America, parts of South America and many places in between. She currently plays in Balkan party band Blue Giant Orkestar and gigs-abroad-only-band Holiday Club with Scottish, Irish and Breton trad styles. She has worked as Artistic Leader at Ethno music courses both in Chile and Germany in 2015 and 2016, and now enjoys being back in the thriving session scene of her home city.

For the past three years Graeme Armstrong, a singer and guitarist from the Scottish Borders, has been performing at world leading festivals including, Cambridge Folk Fesitval, Denmark’s Tønder, WOMAD UK, Chile and Las Palmas, the Philadelphia Folk Festival, Celtic Colours, Milwaukee Irish Festival and 3 successive outings at Glasgow’s Celtic Connections. Since joining Talisk, in 2017, they have gone on to be crowned 2017 Folk band of the year, at the MG Alba Scots Trad Music Awards, and only a year later, winners of the Belhaven Bursary Award at the same awards netting them a 25,000 pounds’ cash prize. In 2019 the band’s second album ‘Beyond’ was shortlisted in the Album of the Year category and was given multiple 5* reviews and picked up “top of the world album’ by Songlines, this stamping Graeme’s authority onto the UK’s trad scene as one of its leading artists. As skilled collaborator he has also appeared on various albums, including being a co founder of the award wining Rachel Hamer Band. Their debut album ‘Hard Ground’ was given a 4* review in “music republic magazine”. By the end of 2020, Graeme’s debut solo album will be released and out on the road.