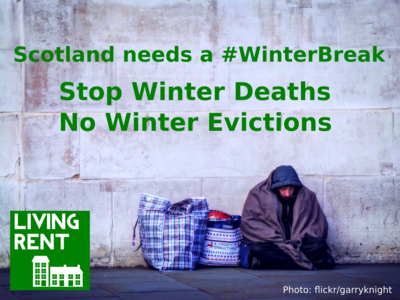 This year, let’s prevent any new deaths on the street. Let’s have a #WinterBreak for evictions in Scotland.

Shelter Scotland estimate that 5,000 people sleep rough on Scotland's streets throughout the year. The main route to homelessness is the loss of a tenancy. In Glasgow alone, 39 people died between May 2016 and March 2017. This risk is far higher in the winter. And this situation is completely avoidable.

In France since December 1956, there has been a “winter break’’ to help protect residents from being thrown out into the cold from the 1st of November until the 31st of March. This covers all tenants, people in temporary accommodation, and people living in any temporary shelters from being evicted or such temporary structures from being destroyed.

The “winter break” law helps reduce the risk of people having to sleep rough during the winter, and reduces winter deaths. Help us win this for people in Scotland too.

We are calling on the Scottish Government to implement a similar law against evictions during the winter. We do not want anyone sleeping rough this winter and any more winter deaths in Scotland.

We want a #WinterBreak for evictions in Scotland.