What a night it was!

On December 2nd, a diverse cross-section of the Glasgow Left descended upon Renfield Lane, gathering at Stereo to commemorate the centenary of the return from prison of John Maclean, one of Glasgow’s most famous radical figures. Organisers and activists, young and old, came together to celebrate through speech and song the legacy that John Maclean and Red Clydeside left for us. Put on by the Scottish Labour History Society and hosted by trade unionist and Rise activist Cat Boyd, it was a rambunctious and inspiring night. All proceeds from the event were donated to Living Rent - a vital contribution to continuing our union’s grassroots struggle for tenant power.

The night began with a small introduction from Henry Bell, one of the organisers of the event and author of the recently published biography John Maclean: Hero of Red Clydeside. Highlighting the continuing relevance of Maclean’s work and legacy, he told Living Rent “how great it was to have a room packed with people from all kinds of different left traditions celebrating their shared history in the struggle and their shared campaigns today.”

Next was Kenya-born and Glasgow-based singer Heir of the Cursed. A hauntingly beautiful acoustic act, her songs movingly reflected on the struggles of being a young black women in Scotland facing racism, depersonalisation, and discrimination.

Following her was one of Living Rent’s lead organisers, Joey Simons, who described an early 20th century Glasgow crippled and strangled by greedy landlords, a Glasgow similar to that of today. A hundred years ago, radicals like John Maclean, Helen Crawfurd and Mary Barbour decried the practice of homes being built for profit. Today we still have that same for-profit model and face the tyranny of greedy landlords who must be forced to provide decent, affordable housing. The conditions we face today, Joey described, are the same conditions of that era, and that is why we must continue to fight.

Continuing on the legacy of John Maclean was James Kelman, a Glaswegian Booker Prize winner and author of acclaimed works such as How Late It Was, How Late and A Disaffection. He reminded us that while John Maclean is an important figure, he is nonetheless mythologised and we must not forget the radicality of the whole Red Clydeside movement that propelled him. It is our duty to study the history of that era in all its complexity, in order to truly connect with those diverse revolutionary traditions today.

What followed was more lyrical reflections on the Red Clydeside era by arguably one of Scotland’s most famous folk singers, Arthur Johnstone. Singing about the effect of World War 1, he brought to life the emotions of disaffected young men, eager for a different, more egalitarian world. But fitting the theme of the night, he belted out the the iconic John Maclean March, a song that reverberates with Glasgow’s radical spirit.

Next we heard from Nicola Fisher, former president of the largest teachers union in Scotland, EIS. Describing the recent EIS demonstration that saw over 30,000 teachers in Glasgow march for fair pay, she reminded the crowd of John Maclean’s initial career as school teacher, a skill he continued to hone by helping to found the Scottish Labour College in 1916. Students, teachers, and activists alike, she told us, need to expand education around Red Clydeside so that people can see and continue the legacy left to us, as well as challenge racism and fascism head on today.

The night concluded with Glasgow-based rock artist Declan Welsh, who entertained with various self-written protest songs and poems. He finished off his set with a fiery arrangement of that historical classic “No Pasaran!”, a reminder that the struggle continues no matter the barriers. 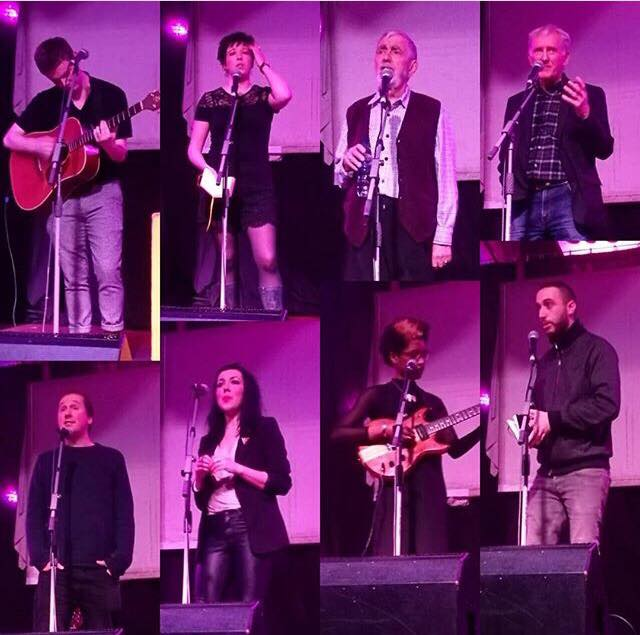 Overall it was a huge success. We raised hundreds of pounds to expand tenant struggle and we made connections with people who were overwhelmingly supportive of our work. As Ewan Gibbs from the Scottish Labour History Society put it:

“The Scottish Labour History Society exists to promote the study of the past, but we have always had connections with living, breathing, movements. Our commemoration of John Maclean's release from wartime imprisonment was organised to support those standing in his tradition today. Living Rent are continuing Maclean's commitment to an expansive and confrontational form of politics rooted in mobilising working-class power.”

The housing conditions of 21st century Glasgow are eerily similar to those of the early 20th century. Homelessness is on the rise, landlords are comically sinister, and private capital continues to pull the levers of power. But it is not unopposed. “Great John MacLean has come hame tae the Clyde” read the final words of the John Maclean March. They could remove the man, but he returned and with him a legacy that would stretch far beyond his time. A legacy Living Rent channels as we build tenant power street by street and block by block.