“This is not going to be a boring AGM, because we’re not a boring union!”

Living Rent members Jack and David report on our AGM.

On Saturday 13th October, Living Rent members rushed into the Pearce Institute to take shelter from the rain, embarking on a full days programme aimed at setting out our collective vision for building tenant power in the year ahead.

The MacLeod Hall at the Pearce Institute was decked with banners, old and new, homemade and professionally printed, a visual testament to the efforts and progress of Living Rent’s Glasgow Branch since its inception 18 months ago.

Opening the event was an all-female panel composed of Living Rent members Anna, Sonja and Annie along with FocusE15 mothers Saskia O’Hara and Jasmin Stone. With decades of neighbourhood organising between them, the panel shared how they turned from being victims of a broken system into community leaders at the forefront of social change.

Anna opened the session with a challenge to the audience: in order to address dire widespread housing conditions, ‘will you be part of building the power we need’ by collectively supporting each other as tenants? ‘Yes!’ was the rip roaring response. Annie followed with a first hand account of the potential of fighting and winning cases as an empowered union. Then these mighty mothers and honored guests from FocusE15 stepped up to deliver their ten lessons learnt from five years of organising strong neighbourhoods. Sonja signed off the first session, concluding that the creation of a movement led by those worst affected by the housing crisis was only the beginning, as Living Rent would continue to listen to and act on motions to give women a greater voice in the union.

One of the aims of this years AGM was to reinvigorate the Glasgow Branch action teams with new faces and energy. In the build up to the AGM, members had the chance to nominate themselves for one of these eight action teams: Member Defence, Campaigns, Outreach, Events, Media, Communications, Research and Fundraising. The second session was dedicated to explaining the democratic steps we are taking as a union to ensure maximum engagement and a fair election process. Branch organiser Sean Baillie announced the exciting result that each new action team is now up to five members stronger than before the AGM.

After a break, the members in attendance were organised into action teams, participating in workshops that introduced members to the work of each team. In one corner, member George took the Outreach workshop, running through Living Rent’s door-knocking techniques and membership building strategies. Just opposite, Anna, Linda and Jack ran the Member Defence workshop, introducing the work of the ground troops of the union by collectively assessing a mock case and acting out a negotiation with a bad landlord (convincingly played by our member David). Campaigns organiser Tom ran another engaging workshop based on our Seize the Fees campaign, where participants learnt how to build successful campaigns by using various groups and actors to reach campaign goals. Finally, an events workshop was lead by Joey. Based on the fundamental tenet of providing food and childcare, they hatched a fantastic plan for Living Rent’s next event, and it seems there will not be a boring one anytime soon! After the session, workshop participants were then encouraged to sign up to action teams and the newly affiliated members were tallied up.

The penultimate session was the announcement of Living Rent’s newest campaign Not a Penny on the Rent. It started off with a short film about the 1968 Greater London Council Rent Strikes, followed by a presentation about social housing in Glasgow. In this presentation we learned how housing associations in Glasgow habitually raise rents at the expense of working class families’ financial security whilst masquerading as charitable non-profit social enterprises. This was elaborated on with extensive research by our member Alessio, who detailed how Govan-based Linthouse Housing Association could continue to make a profit without raising annually raising rents. This groundbreaking report was a demonstration of the union’s potential to investigate for ourselves, building knowledge from below. It was a rousing call to arms, clearly showing that many Housing Associations are neglecting their social responsibility. Living Rent’s answer: ‘Not a Penny on the Rent!’ 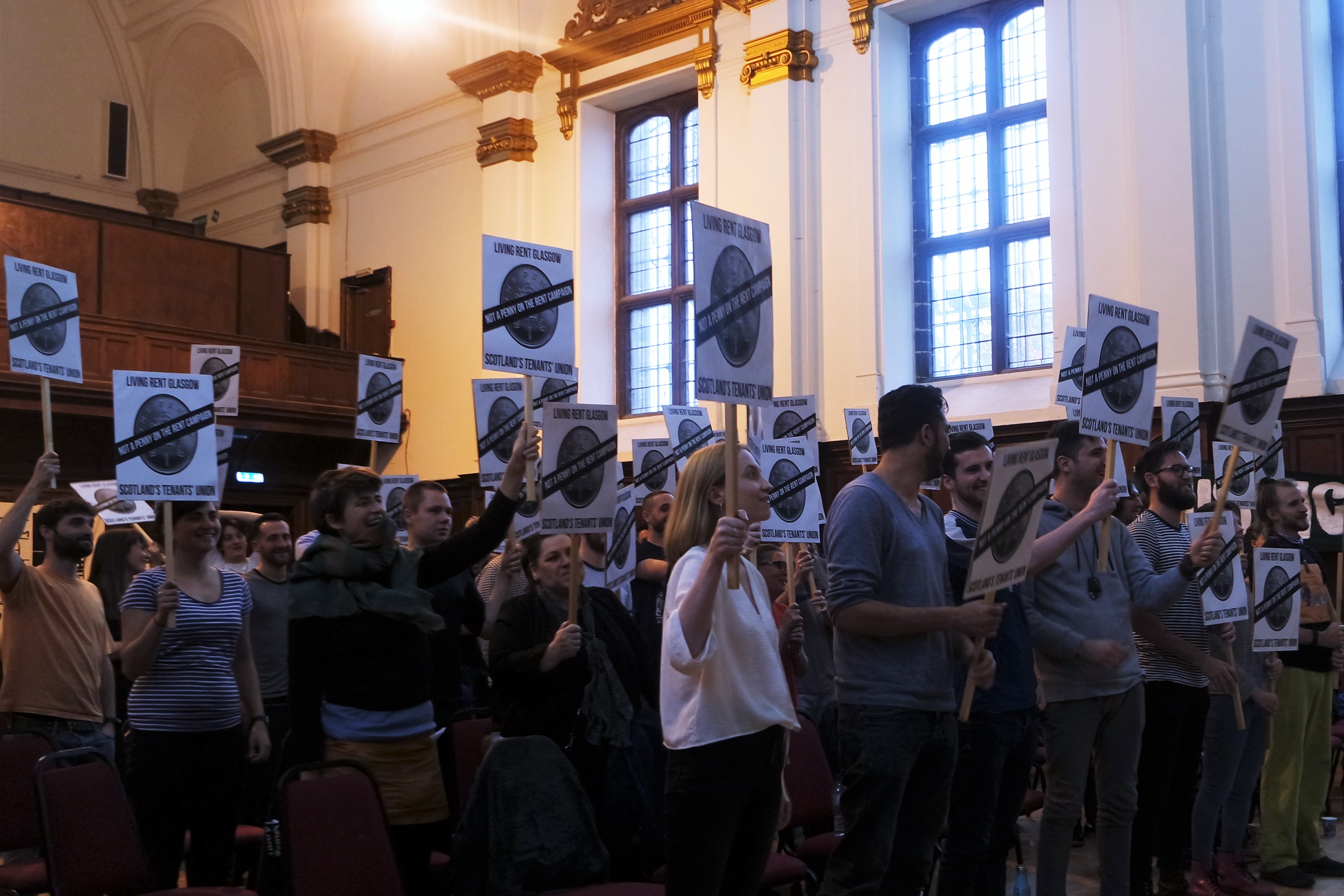 Lastly, Joey rounded off the day’s events with a fiery closing speech, encapsulating the feeling of empowerment that Living Rent Glasgow’s first AGM had inspired.  The event was a show of force for the union, a demonstration that we are experts in our own situation and that we have the strategy and energy to change the housing landscape in Glasgow. Over the course of the day, attendees had become members and members had become campaigners and organisers. But it was also an example of our mutual support for each other as tenants. Great food and childcare were provided, an integral part of enabling access for more and more members, ensuring longevity as a movement. As Joey put it…

“When Living Rent comes knocking, you better answer the door! We see you locking the doors to your fancy offices! We’re here for the long haul, we’ve got tea and sandwiches, we’re not going anywhere!”

A big thanks to…

Arika, SEAD fund, The Pearce Institute, the mighty mothers of FocusE15, Sana for providing childcare, Leila and Annie for the food and to all the members.

Check out this video from Commonspace on who we are and what we do!