New research published at the University of Manchester with Ethical Consumer magazine explores how ‘astroturf’ movements of landlords have been set up all over the world to fend off threats to Airbnb’s business model. The company hired hundreds of "community organisers" since 2014 to set up over 400 ‘Home Sharing Clubs’ in cities all over the world, including in the UK. You can read this important report here, as it outlines how companies use so-called grassroots movements to pursue back room deals and undermine our movement and demands for a city that puts residents and tenants first. 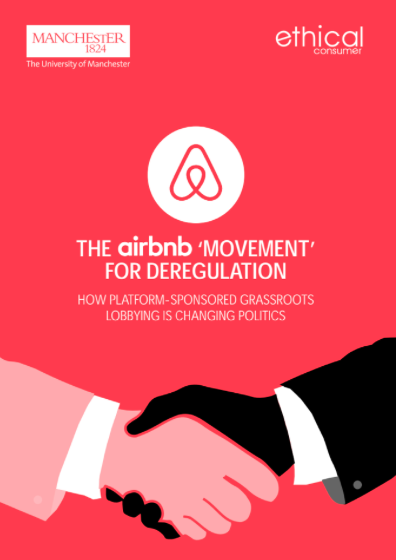 This research explores the relationship between companies in the new digital economy and the political ‘movements’ they mobilise for fending off threats to their business model.  It shows how ‘grassroots lobbying’ techniques used in tobacco, pharmaceutical and fossil fuel industries are becoming repurposed by digital platforms, enabled through their collection of user data. This is particularly the case with Airbnb, who have hired hundreds of community organisers since 2014 to set up over 400 ‘Home Sharing Clubs’ in cities all over the world. They are greatest in number in cities where Airbnb faces the most pressure from local governments and housing campaigners such as Edinburgh, Barcelona, Berlin, New York, and San Francisco.

One of our Board members, Meg Bishop, explains

"AirBnB has been on the charm offensive in local communities across the UK in order to pressure governments into allowing them unregulated access to our housing market. With the Scottish Governments' U-turn on their promises to regulate the short-term rental market, they risk pandering to corporations who are pushing up rents and rates of homelessness in our most housing-constrained neighbourhoods. Each otherwise viable home that is rented the year as a holiday let is one less home for someone to build a life in. When the pandemic is over, we can't go back to a situation where homes sit vacant to be let out for just a few weeks of the year to tourists as a means for exorbitant profits. Our members long held the position that these properties can and should be long-term affordable homes and we demand that the Scottish Government makes good on its promise to regulate short term lets"

For instance, the research shows that Airbnb curates their Home Sharing Clubs to ensure that members are individuals or small businesses and not the professional landlords who own the majority of the platform’s listings and provoke most concern among city councils. “My mission was actually to keep [those landlords] away,” one former staff member said. Airbnb also provide refreshments for host meetings, placards for protests, and transport, said former staffers.

With support and dialogue from groups such as lobbying transparency organisation Corporate Europe Observatory, civil organising NGOs such as Community Organisers, and housing campaigners Acorn, Greater Manchester Tenants Union and Living Rent, the report calls for statutory lobbying registers, increased resources for municipal governments to protect local housing, and a review of the data gathered and held by digital platforms for political purposes.

You can download a copy of the report here.