Oh the battle was long but the people were strong
You shoulda been there that day!
Oh had he come wi' fifty men
He could not pass that day,
For all the women from the Braes
Went out to bar the way.

‘The Battle of the Braes’, song on the battle against eviction in Skye, 1886

Living Rent is proud to join today’s May Day march, one hundred years on from the great demonstrations of 1919. The tens of thousands of men, women and children who flooded the streets of Glasgow that day reserved a special place in hell not only for the capitalist, but the landlord too. For a hundred years before, and for a hundred years since, the working class of this city has had to fight for the basic right to habitable shelter. Any temporary improvements won have always been the result of mass action, not the benevolence of the state. From the community organisation and direct action of the women of Govan and Partick in 1915, to the Clydebank rent strikes of the 1920s, the squatters who occupied land and buildings to house the homeless in 1946 to the campaigns against the sell off of council housing in Merrylee in the 1950s, against the damp monster in the Gorbals in the 1970s, or the mass movement against the Poll Tax in the 1990s, tenants have a proud and unceasing history of struggle behind them. Living Rent – a fighting union for all tenants – stands firmly in that tradition! 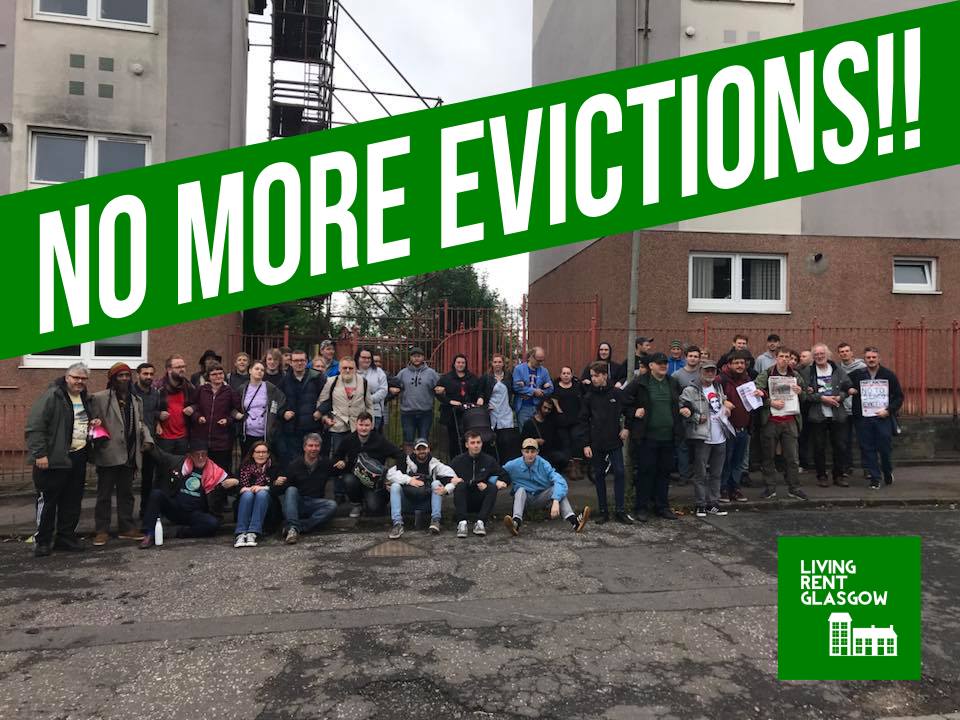 The ultimate weapon in the hands of property owners – whether private landlords, the local authority or the state – has always been EVICTION. Bailiffs, warrant officers, hired thugs, the police or private security companies have forever carried this noose in their hands, ready to pull it tight around the necks of tenants whenever property owners see fit. Midnight flittings, warrant sales, violence and homelessness have forever haunted the homes of the Glasgow poor. So long as the right to evict – backed by the full force of the law – trumps the right to a safe and affordable home, tenants will continue to resist with their ultimate weapon: SOLIDARITY. Living Rent is therefore marching today with a simple slogan emblazoned on its banners: NO EVICTIONS.

Never before has this been more urgent, and never before has the law been so firmly on the side of evictions. On 12th April, the Court of Sessions shockingly ruled in favour of the Home Office and its housing contractor SERCO, stating that it was within their lawful right to evict more than three hundred vulnerable asylum seekers onto the streets of Glasgow without even the need to obtain a court order. The roll out of Universal Credit is leading to a massive rise in rent arrears, debt, insecurity and evictions, with housing benefit now subject to sanction and tenants in many cases being left to starve as their money is cut. And with evictions now responsible for up to a quarter of all homelessness in Scotland, the past 18 months has seen the shocking deaths of 139 people across Scotland while sleeping rough or in temporary accommodation. Living Rent refuses to allow this shameful situation to become normalised. 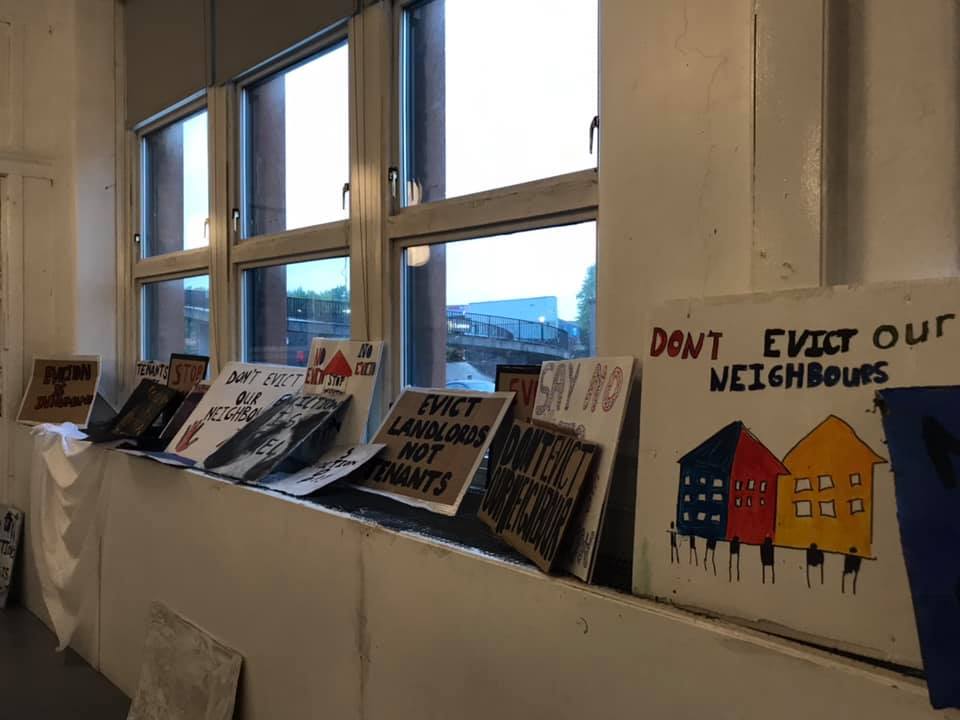 We call on tenants to join us in this fight, not out of charity, but out of necessity. Already we have built a city-wide anti-eviction team ready to resist SERCO’s lock changes, with over a thousand bodies ready, trained and willing to fight them on the doors if necessary. Groups such as Migrants Organising for Rights and Empowerment are working to challenge the racist hostile environment at its root. Living Rent’s neighbourhood branches in Maryhill, Govan and beyond are fighting and winning on the everyday issues – from UC to heating – that blight working class communities. Our campaigns for serious, workable rent controls and a #winterbreak on evictions are forcing the hands of politicians at the highest level to put their money where their mouth is. And above all, Living Rent is building the tenant power that is the only force capable of making evictions a thing of the past. Join us!

Join our No Evictions bloc