Report : Living Rent and the Unity Centre coordinate a workshop at 'Resisting the Hostile Environment' a public event, November 2018 @ The Space

This summer, Living Rent & the Unity centre helped mobilise against Serco’s plans to evict more than 300 asylum seekers. In November, members of the same groups shared some experiences and resistance methods with other activists at an information and training day at the Space. Alongside these groups, we geared ourselves up for the struggles ahead surrounding the UK Government’s Hostile Environment. 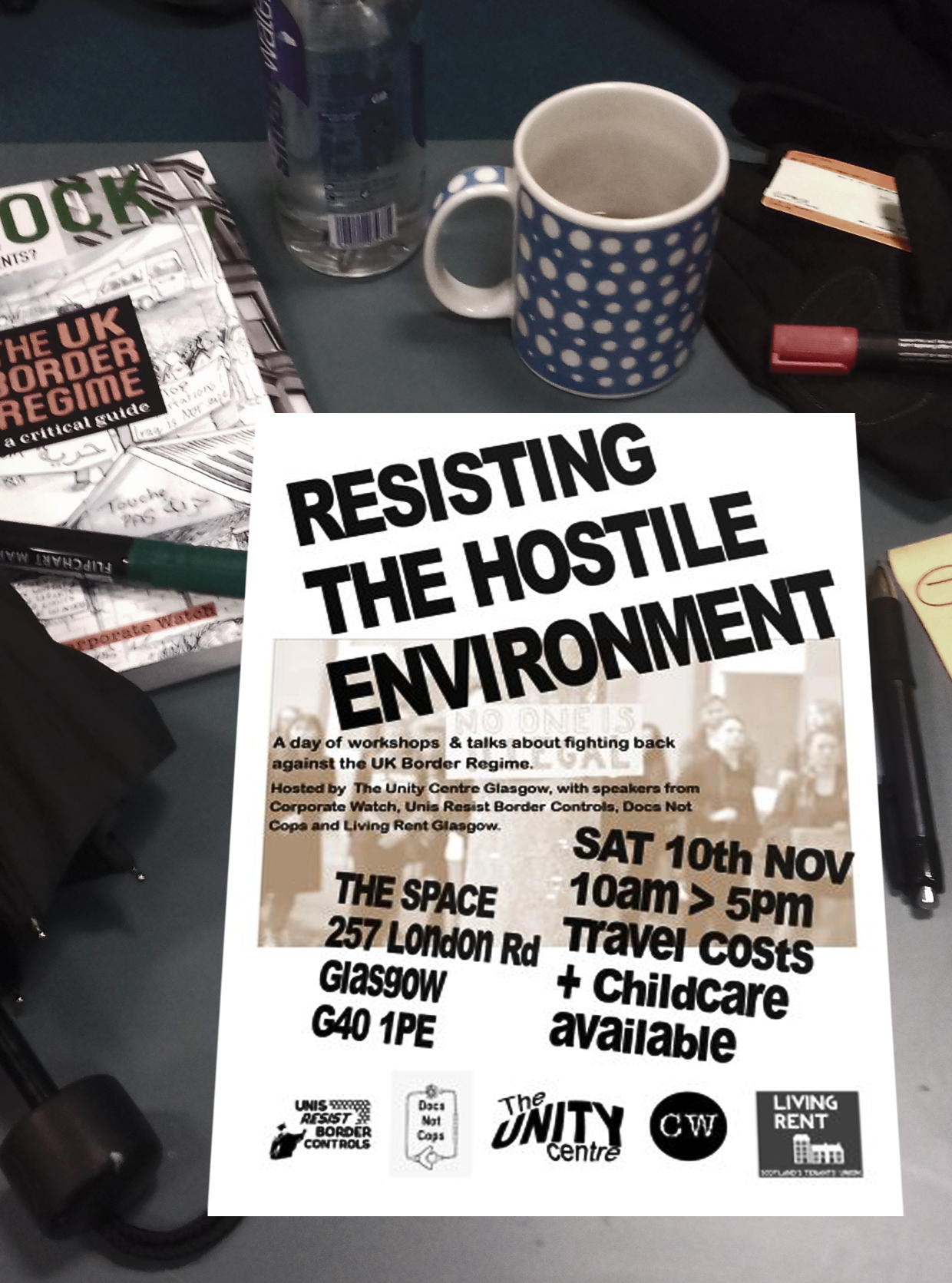 “The aim is to create, here in Britain, a really hostile environment for illegal immigrants.”

But few would have imagined how drastically the government would adopt this approach. It has created barriers to all aspects of life, including a complex legal framework that is designed to criminalise migrants for situations beyond their control. What now exists is a cruel hierarchy, where a person’s immigration status dictates how they are treated within the current state systems of support and education.

We have seen enforced destitution, detention, and deportation used to create this hostile environment aimed at deterring future generations of migrants from considering the UK as a place of refuge.

Our tenant’s union, Living Rent, recognises one of the many tools used to target migrants: Eviction. Living Rent were invited alongside Unity centre to share experiences of organising against Serco’s threat to evict Asylum Seekers by changing the locks on their homes.

We helped facilitate a workshop reflecting on the tactics used during the campaign. We discussed challenges faced by the campaign - such as working with seperate groups who have different priorities and organising methods. We heard about the great successes along the way - like delivering a ‘notice to quit’ direct to Serco’s offices, from people with lived experience of the Asylum system. Some of those involved in the protests also shared their stories of life in Serco accommodation. There was a great energy in the room, people keen to work out problems faced around organising, and eager to keep up the fight against the immoral lock-changing to evict people.

Many folks have now signed up to keep organising in the campaign against Serco, If you havn’t joined yet, go to our Website and add yourself to the Serco eviction resistance. We will be sending out calls for actions to engage with local residents soon.

There was also acknowledgement that the problem does not end with Serco - even if Serco lose their tender for housing contract (which seems likely given the justified public outrage against the eviction policy), another private profit-making company will gain the tender and people will be subject to similar living conditions. The problem lies with the Home Office who maintain their refusal to support people if a claim is rejected, if there is a break in the appeal process, or many other times when the department simply stops support for people. The department further supported lock changes in their defense at the court of sessions in Edinburgh this week. The full result of the court case is expected to be made public in January.

The woeful state of housing for asylum seekers was made clear during the training event this month by members of the Ubuntu Women Shelter. This organisation are working to establish an accommodation service for women without recourse to public funds as a result of their immigration status. These women are amongst the worst served by the state often in very vulnerable situations and who’s stories highlight the human rights laws being ignored in the UK.

Central to the event was a reminder that attempts are being made on us all as individuals to be co-opted into the government’s hostile environment strategy. As a union this is something we cannot stand for. During the event we heard of the deployment of teachers, nurses, bank employees and landlords to carry out border enforcement work against their will and contribute to a climate of suspicion and surveillance.

This is what other organisations had to say on the day:

UNIS - resist border controls described their opposition to visa policing, data collection and surveillance on school, college and university campuses. One alarming and well publicised example of this was the official school consensus requirements eventually scrapped in 2016 which asked primary school pupils to submit data on their nationality and country of birth to education boards who passed information to the home office. Unis are therefore working to unite migrants communities, students  lecturers and university workers against this type of discrimination.

Similarly Docs not Cops is a campaign group which educates NHS workers, care professionals and patients to resist the hostile environment’s infiltration of UK healthcare. Which charges extortionate fees to undocumented migrants or else refuses to allow them essential services including cancer treatment (at least this is true for England, more information on Scottish systems is needed to be made public) . All this leads to isolating patients with potentially life threatening conditions by stoking fear that doctors will check their ID and hand them over to border police. All in all making them too afraid to walk through the doors of their GP surgery or nearest A&E until it's too late.

Also Joining the event were Corporate Watch a not-for-profit collective who have recently gathered and published research on the history of UK Immigration enforcement, This book:

‘ The UK border regime; a critical guide’ details successful cases of opposition such as publicly shaming politicians for their sponsorship of G4S or Mitie who hold the major UK detention contracts. It also documents campaigns to shut down detention centres and ground charter flights used by the home office to deport large numbers of migrants. The exposure of legal and operational limits of this system helps us to understand the border regime and how we can fight it effectively.

The workshops and discussions at this event provided new methods and tactics for the future. Not only to not comply with the hostile environment but Living Rent and the Unity Centre made sure to emphasise our plans to pursue direct action against the state sanctioned discrimination in housing. Our task is to continue to grow neighbourhood bystanders into wardens of their communities actively stopping evictions and fighting against  threatening treatment of landlords and property management companies.

Once again, the struggle is ongoing - Sign up above and resist the hostile environment in housing