Three years on: Justice for Grenfell

Three years on since the Grenfell tower fire - we continue to stand in solidarity with all those seeking justice for the victims of Grenfell. 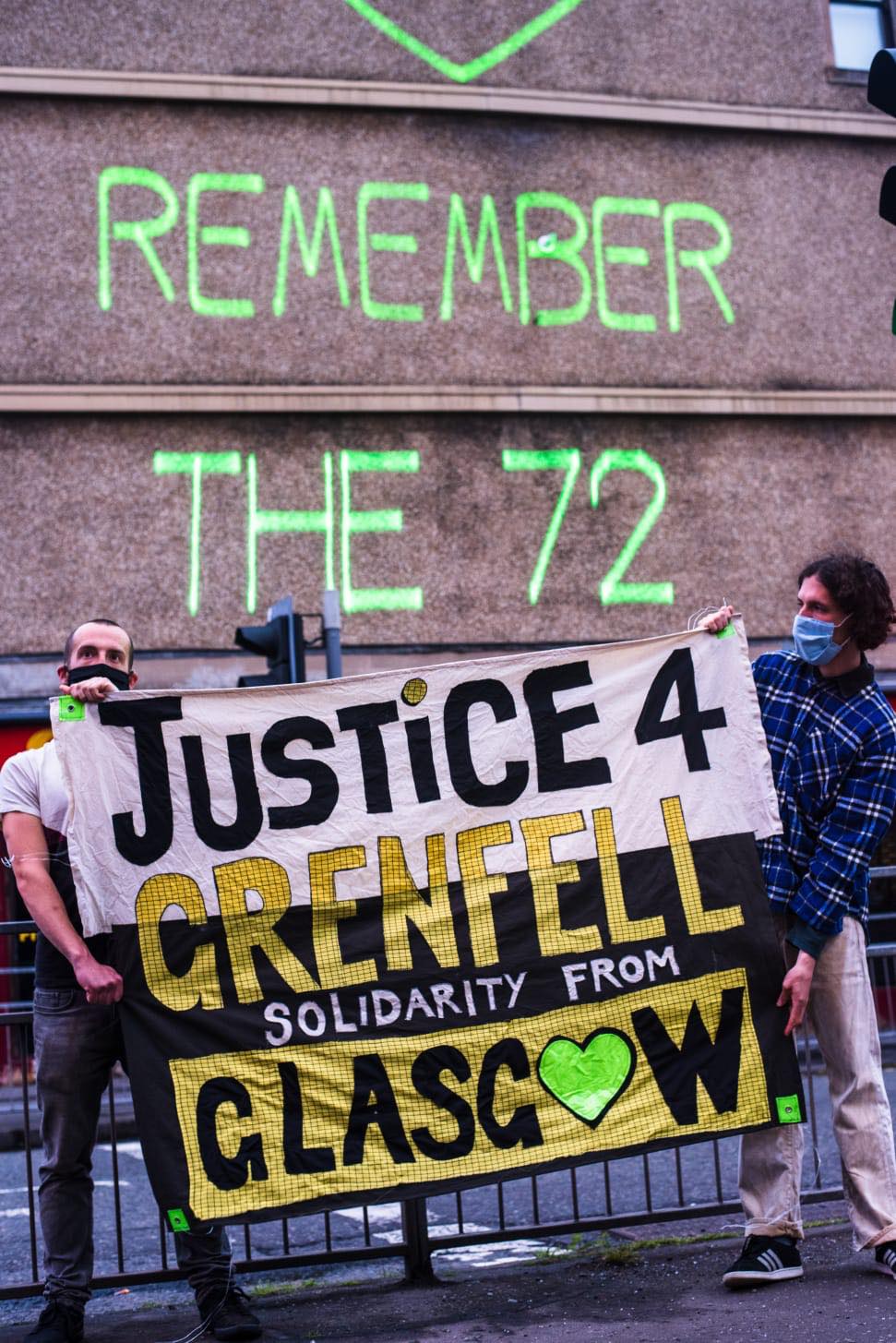 Today marks the 3rd anniversary of the Grenfell Tower fire, in which 72 people lost their lives. Living Rent once again expresses its full solidarity with the bereaved, survivors and wider community of Grenfell Tower, and their ongoing search for justice.

This is a fight that concerns every one of us. Not just the Grenfell survivors even now waiting to be permanently rehoused, or the tens of thousands still living in buildings covered in flammable cladding. But the millions of tenants – overwhelmingly working-class, black and minority ethnic – trapped in unsafe, unaffordable, insecure and badly-maintained housing.

The second phase of the public inquiry into the Grenfell Tower fire confirmed what residents already knew: that what happened was not just a tragedy, but a crime. From the insulation manufacturer Celotex, to the distributor SIG Technical Services, the US cladding firm Arconic, and the fire engineers Exova, private companies cut corners, flouted regulations and knowingly sold deadly materials for the sake of profit. As Sam Stein QC told the inquiry:

They were allowed to do so by a political culture that had reduced the lives of working-class residents to a cost-benefit analysis. Emails revealed that councillors and officials from the Royal Borough of Kensington and Chelsea saw Grenfell Tower as just one of the ‘poorer performing assets in the housing stock’, not worth spending money on. Refurbishment was to be driven by ‘value for money’. Tenants who raised warnings were ignored, harassed or gagged. In a sea of mansions and luxury flats, in one of the richest boroughs in Europe, the residents of Grenfell were sacrificed to save £300,000.

Three years on, the culture of contempt remains. The government has still failed to remove combustible cladding from 1,700 buildings across the country. The Building Safety Fund set aside for the removal is likely to cover costs for only a third of them. Throughout the Covid-19 lockdown, tens of thousands of people have been told to ‘Stay at Home’ in tower blocks that could go up in flame at any moment. The financial, physical, and mental health cost to residents has been devastating: NHS workers have spoken of being more afraid of dying at home than at work.

The brutal class and racial inequalities of the UK housing system at the heart of Grenfell have only intensified. In the current crisis, it has been BAME and working-class communities who have paid the price: more likely to die from the virus, more exposed to high risk jobs, and now threatened with evictions and debt on a massive scale. BAME households remain more likely to experience poor housing quality, fuel poverty, homelessness and overcrowding. The Black Lives Matter protests are confronting the same racism and state violence that meant some residents escaping the Grenfell Tower inferno were met not with firefighters, but police in riot gear.

In Glasgow, people seeking asylum have been forcefully removed from their homes into cramped, degrading and unsafe hotels by the private contractor MEARS. Already this policy has cost the life of one young man, Adnan Olbeh, who died last month, and many more are at risk. The campaign to end hotel detention has been met with denials, silence and cover ups as it fights for safe accommodation.

It is clear that Grenfell was not a terrifying exception but, in the words of the rapper Lowkey, the moment when this ‘invisible violence turned visible.’ 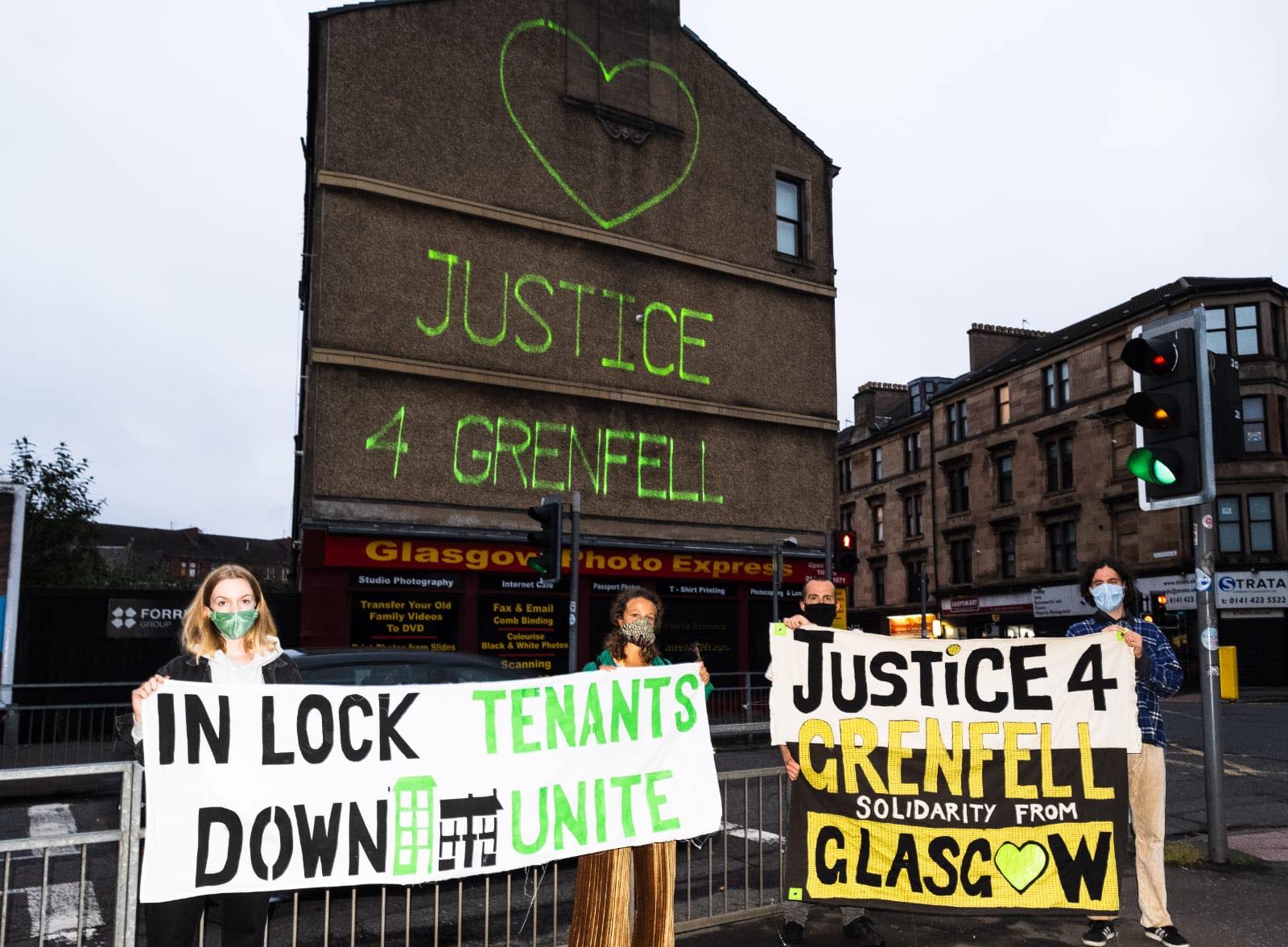 For three long years, the grieving survivors and bereaved families of Grenfell Tower have been dragged through a public inquiry that was explicitly set up not to consider ‘questions of a social, economic and political nature.’ In the latest inhumanity, the private companies involved are now sabotaging the inquiry by refusing to give evidence that could later be used against them in criminal proceedings. Charges of corporate manslaughter and jail sentences for those responsible are further away than ever. The history of public inquiries – from Hillsborough to undercover policing to deaths in police custody – shows that little justice can be expected from above.

The wider Grenfell community has continued to march, commemorate and support one another in the face of obstruction, inaction and trauma. Living Rent is committed to meeting their call to ‘never forget.’ Together we must fight to build real housing justice, and ensure: ‘never again.’