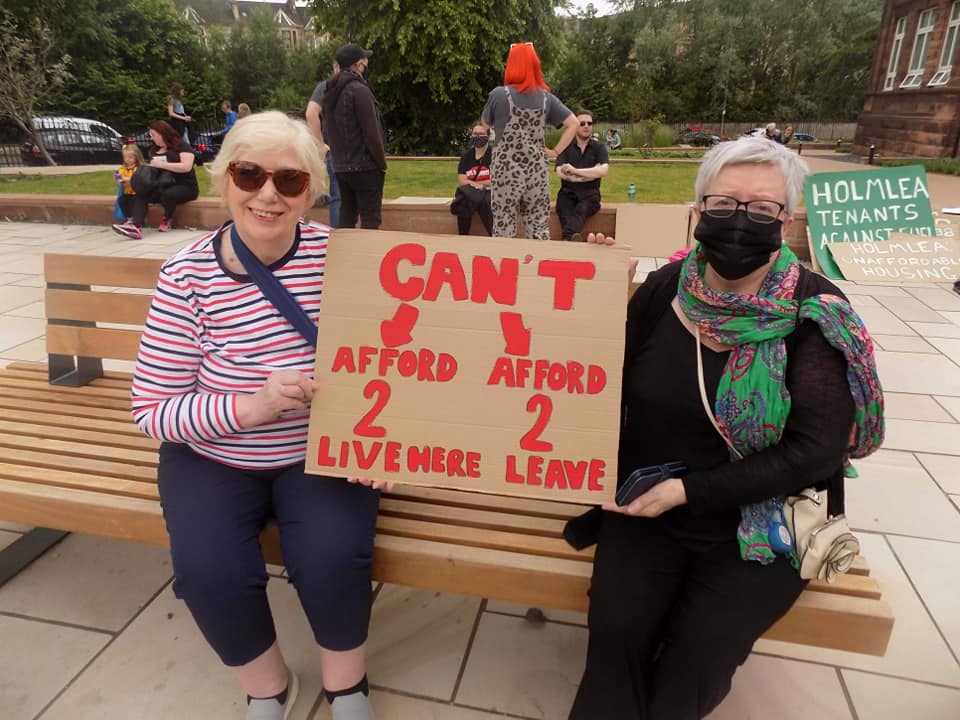 On August 19th a negotiating team of our members, tenants of Newcastle based social landlord Home Group, living at the former Holmlea Primary School in Cathcart met with Home Group Director Sandra Brydon and CCG Scotland (construction company) Managing Director David Wylie to seek a constructive way forward regarding the dire situation of fuel poverty they have been left in due to the extortionately expensive heating systems installed in their homes.

Members were glad that the directors showed reciprocal desire to negotiate in good faith, and all present came to several important mutual agreements. You can bring yourself update to on the campaign so far and read full details of the agreements reached here.

The Holmlea Primary Story So Far... (click the link for a video made by members)

Back in May our members, Home Group’s social tenants, living in the renovated Holmlea Primary School at 95 Spean in Cathcart decided they were not going to tolerate another winter living in fuel poverty and misery, and started getting organised to pressure their landlord to review the extortionately expensive heating system that was installed.

31 out of 35 households living at the school signed a collective letter demanding that Home Group and CCG make themselves accountable to the planning and energy efficiency decisions made whilst renovating the school, and that they commit to negotiating an acceptable compensation package to make up for their mistakes.

On 10th July the members organised a day of action, and delivered their letter to Home Group and CCG, and were glad that this was met with a reciprocal desire to meet and negotiate in good faith on August 19th. You can read the agreements reached below, and needless to say that our members and their neighbours look forward to constructive negotiations continuing at their next meeting in October.

Home Group Scotland Director Sandra Issued an apology for the decisions that have lead to 95 Spean Street tenants receiving extortionate electricity bills since moving in.

Managing Director of CCG Scotland David Wylie to go back to the Glasgow City Council Planning Department and review the decisions made regarding heating based on the building’s listed status. These include decisions not to use gas, or to use solar panels, as recommended in the Energy Statement sent to GCC Planning.

John Bagley of CCG Scotland to go to their plumbing contractor, Malcolm McArthur, with questions as to why they have been unable to fix boiler faults, and why there is not a sufficient emergency out of hours system. And to look into why the system has significant faults after only one year of service.

Sandra Brydon of Home Group recognises that there is a case for significant compensation in light of the suffering tenants have been put through. Home Group will complete their investigation into the extent of unduly high utility costs, and our members and their neighbours will compile their own evidence, so that a figure can be discussed when negotiations resume.

Tenants, Home Group and CCG agree to a meeting and further negotiations in October.

Are you a social tenant struggling with fuel poverty? Join the union today, get your block organised, and hold your landlord to account with union members by your side. www.livingrent.org/join
Do you like this post?
Tweet