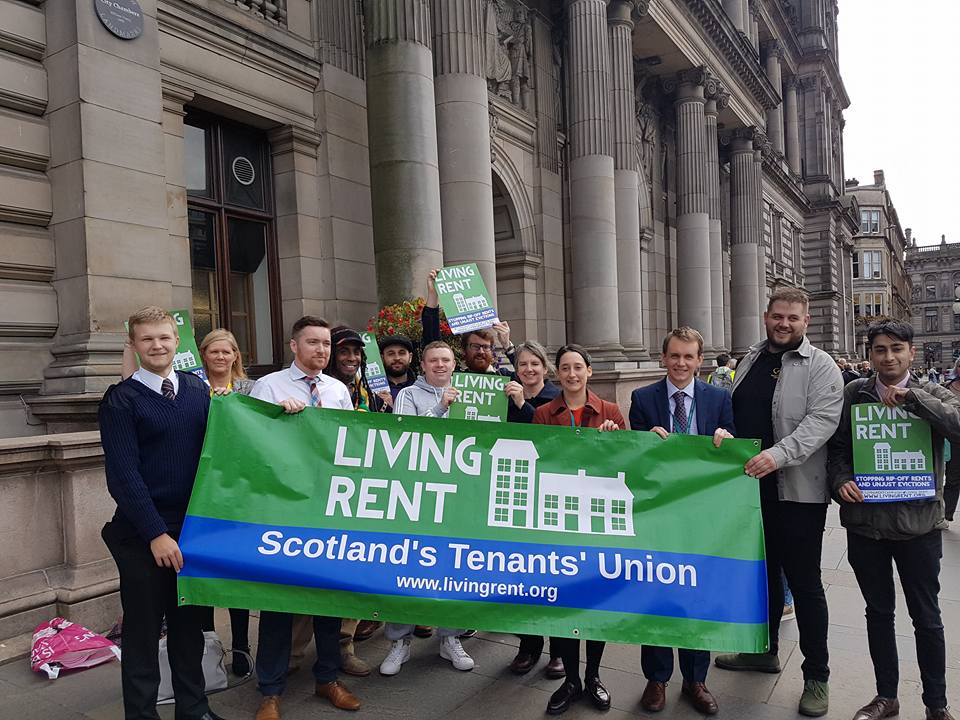 The proposed Fair Rents (Scotland) Bill, would cap annual rent increases to the “Consumer Price Index plus 1%” and allow private tenants to request a Rent Officer to determine a “fair open market rent” if they felt they were being overcharged.

Responding to the consultation on the bill, Living Rent supported both measures but cautioned that the proposed limit on rent increases is too high. It adds that a one-size-fits-all approach will not be able to take into account local conditions, and called for local authorities to be able to set lower limits in their areas

The union reiterated their calls for a strong system of rent controls, designed not just to limit increases but to bring rents down, that limits carry over from tenancy to tenancy, and for rents to be linked to properties rather than tenancies and to the quality of a home. They argue that this is a vital way to both ensure affordability and incentivise urgent improvements in the private rented sector.

The report also argues that improvements to the quality of PRS housing will make an important contribution towards meeting Scotland’s emissions targets by improving energy efficiency.

“It is clear that rents in Scotland are utterly out of control, and we desperately need measures to limit them. After the failure of the Scottish Government’s Rent Pressure Zones, this bill is an important step towards ensuring tenants have somewhere safe, secure and affordable to live. But the devil is in the detail. New measures must ensure genuine affordability for tenants and not create loopholes for landlords to exploit, such as lifting the cap on rent increases in between tenancies.”

Polling for Living Rent has previously shown overwhelming public support for such measures, with 75% of Scots - and 85% of SNP voters - backing calls for a national system of rent controls.

Read our full response below:

The Member in Charge thinks there is a need to make private rents fairer for tenants and to create a better balance of power between private landlords and tenants. Do you agree with this overall policy aim? If so, do you think the Bill will help achieve this outcome?

Agree: We say daily that the balance of power between private landlords and tenants is dangerously skewed in favour of landlords and we believe that the pandemic has only further illustrated this. We believe that this bill represents an important step towards achieving this outcome, but remain concerned that in a number of respects it does not go far enough.

Partially agree: We do agree with the principle of preventing the landlords of private residential tenancies from increasing rents by set amounts, but we are concerned that the stated metric of the Consumer Price Index plus 1% is too high a benchmark. We would, though, support the legislation stipulating that annual increases could not be more than CPI + 1%, but believe that there should also be no minimum level for caps, and that both local and national limits could be set at lower limits.

On the metric itself, we believe that CPI is a flawed measure. We have previously called for the creation of a specific metric - a “Rent Affordability Index” - that would be designed specifically to assess what is affordable for tenants.

We also agree with giving the Scottish Government the power to vary the cap by order, but believe that this process should also involve local authorities, and that in some regions, where affordability issues persist despite rent increases rarely exceeding CPI + 1%, the case for specific localised caps, to reflect local incomes, is strong.

Furthermore, we believe it is vital that any limits are ‘grandfathered’ and carry over from tenancy to tenancy. We have long argued that, unlike the ‘rent pressure zone’ model, it is important that rent levels are linked to the property, not the tenancy.

Without this, and if increases are only capped within a tenancy (sometimes referred to as “third-generation rent controls”), it means that a tenants model would have rent increases limited while in their tenancy, but that their landlord would be able to increase rents without any limit if that tenant moves out and another moves in. This limitation creates three challenges:

Section 2 allows a tenant in a private residential tenancy to apply to have a “fair open market rent” determined by a Rent Officer. Do you agree with section 2?

Agree: We strongly support the ability of tenants in private residential tenancies to apply for a “fair open market rent” to be determined by a Rent Officer, and for tenants to be able to appeal these decisions to the First Tier Tribunal.

We also strongly support the inclusion of quality issues as determining factors in these judgements. We regularly see tenants living in properties in an appalling state of disrepair, and the measures available for tenants to seek redress of this are too limited and cumbersome.

We do believe, however, that in determining a ‘fair’ rent, consideration should be given to more than just quality - and certainly more than wider market rents. We have long argued for the creation of a ‘rent affordability index’ that would attempt to establish not just what are fair rents, but what are genuinely affordable rents, taking into account local earning conditions and the income distribution of private renters.

Furthermore, we believe it vital that for tenants to have confidence in any such system, that while a Rent Officer should be entitled to reject a request to determine a ‘fair open market rent’, they should not be able to set, suggest or indicate that the rent should be higher than it currently is.

We further believe that it is important for the timescales involved in this to be as rapid as practically possible. Rent increases can cause extreme distress to tenants, and we would be concerned that a slow, unclear or difficult process would render this important measure unworkable. If tenants know they will have to wait months for a decision, there is a real danger that they would prefer to move out of a property than go through a lengthy appeal process. This undermines the proposals and also creates the real danger of landlords using unaffordable rent increases as a means of evicting tenants, thus undermining the important steps made in the 2016 Act to improve security of tenure.

In any answer to question 3, the Committee also welcomes your views on—

Section 3 requires the following to be entered into the Scottish Landlord Register: the monthly rent charged for a property, the number of occupiers, and the number of bedrooms and living apartments. The MSP who introduced the Bill thinks this change will help ensure we have more public data about private rent levels. Do you agree with section 3?

Agree: We do support this measure, and argue that debate around private rented housing is informed by high-quality, holistic data. To this end, we strongly support this data being made publicly accessible.

However, as we have detailed before, we do not believe that Rent Pressure Zones are a sufficient model, and as such do not believe that the goal of this should be to facilitate the introduction of RPZs. We published a policy paper last year outlining what we see as the problems with RPZs, and while collating the required data is indeed one of them, we have identified a number of other crucial issues. We believe that the limited scope of Rent Pressure Zones, the fact that they don’t take account of quality issues, and that caps on increases are only within tenancies, mean that they will not effectively protect tenants from unfair rents. Our full report can be read here: https://commonweal.scot/policy-library/rent-controls-scotland-needs

What financial impact do you think the Bill will have – on private tenants, on landlords in the private rented sector, on local authorities, on Rent Services Scotland, on the First-tier Tribunal, or on anyone else.

It goes without saying that reducing rents in the private sector could have an enormous and positive impact on private tenants, who the Joseph Rowntree Foundation have described as the ‘new face’ of poverty in Scotland. We believe that effective rent controls - which both reduce rents and limit future increases, would be a powerful way of improving the quality of life of private tenants across Scotland.

Of course, though, the inequality and poverty faced by private tenants in Scotland is worse for some than others. In particular, the gender and ethnic pay gap means that high rents in the PRS, which are unaffordable for all tenants, are particularly unaffordable for women and BAME people, who are disproportionately likely to live in the PRS. Reducing rents, therefore, has the ability to also represent a significant step forwards in gender and racial equality.

We believe that effectively limiting rent increases will have a profoundly positive impact in a number of other areas as well, both for local authorities, the NHS, the Scottish Government and the public purse more widely.

We welcome any other comments you may have on the Bill that you think are relevant and important, including its likely impact (positive or negative) on equalities, human rights and quality of life issues.

As well as the health impacts (and associated savings to the NHS) outlined above, we believe that there are two other crucial reasons to effectively link quality to rent controls.