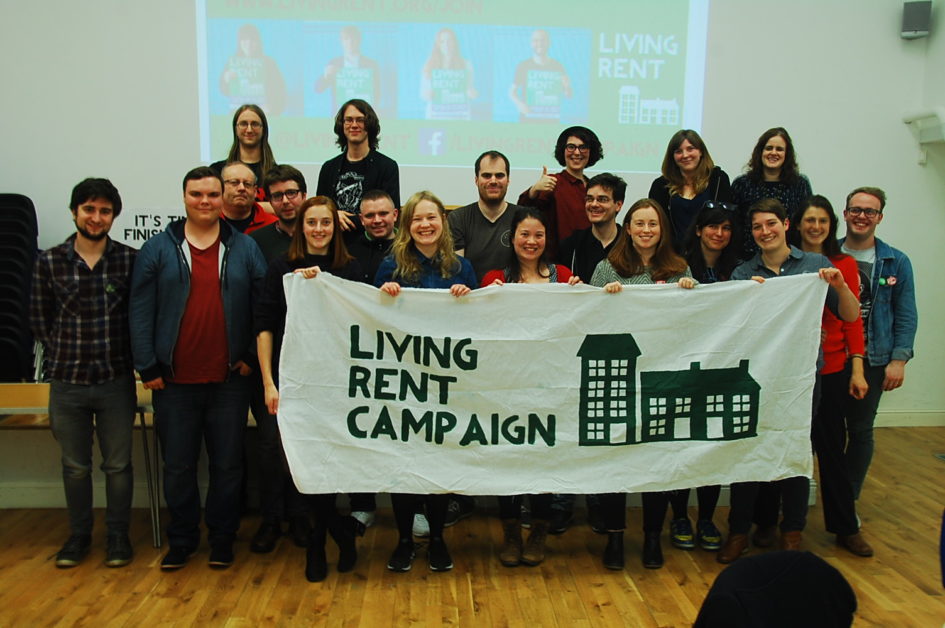 On Saturday 8th October Living Rent - Scotland’s private tenants’ union – held its first AGM. Gathered in the Mary Barbour suite of Govan’s Pearce Institute, the link to the rent strikes of Glasgow’s past was an echo throughout the day. In stories of tenants resisting evictions in Bristol; in lively discussions about building branches across Scotland, and in the banner on the far wall which read: "Stability – check; Flexibility – check; Rent controls… let’s finish the job" – a sentiment I think Mary Barbour and her army of tenants could get behind.

Members from Glasgow, Edinburgh, Perth, Aberdeen, and even further afield came together to plan for the year ahead. Membership launched in July this year, and has been growing from strength to strength each month. We now have over 100 paying members with an additional 2,600 associate members, not to mention the combined membership of our affiliate unions, which include Unite, Unison and NUS.

Stuart Melvin of Acorn International kicked off the day with descriptions of tenant solidarity in Bristol, where neighbours had spontaneously organised an action to prevent an eviction of a migrant family in the local area, reminding us that tenant struggles interact with racism and other forms of oppression, a truth that is important to remember now more than ever. He told us how tenants in Bristol are now a vital interest group influencing the Council elections; a group which Councillors are forced to engage with, something he couldn't have imagined being the case two years ago, but the power has shifted.

This sparked discussions on how Living Rent can influence next years Council Elections, how we can make our voices heard in Scottish housing policy and how we can build branches across the country. By the break, the wall was papered with flip chart scrawled with ideas, arrows and diagrams.

Acting Chair, Liz Ely, delivered the annual report in a Prezi whistlestop tour of photos, infographics, and all that Living Rent has achieved since it launched as a grassroots campaign in 2014. From door-knocking neighbours to mass lobbies outside Holyrood, from moments in the media to meeting the Housing Minister and providing evidence to parliamentary committees, its not surprising that many others in the sector think Living Rent has full time paid staff. Not so. All this and more has been achieved through the hard work and dedication of volunteers who, if you add it up, have contributed an incredible 90,000 hours towards the campaign.

On to the business of the day: members were distributed voting cards in trade-mark Living Rent green, along with ballot papers for voting on the National Committee. Eleven nominees for ten places – not an easy task! But after lots of complicated counting we have our newly elected National Committee:

From reading their statements it is clear that they all bring diverse skills, knowledge and experience, as well as a shedload of passion for housing and social justice!

Next, Kier skilfully guided us through the democratic process in which two amendments to the constitution were proposed: one which saw that any future constitutional amendments would require two thirds of the votes, as opposed to the current three quarters (passed); and another which proposed that National Committee members be nominated and elected by branches as well as at the AGM (motion fell).

The conference closed with a photo-shoot – members gathered around a hand-made banner,  in defiance at all that we’ve yet to achieve, but also in celebration of how far we’ve come. Driving back along the Clyde after the event, we passed through streets where tenants marched in 1915 and as we passed the Clutha Bar Mural, the face of Mary Barbour greeted us. 100 years later, tenants in Scotland are making history again.