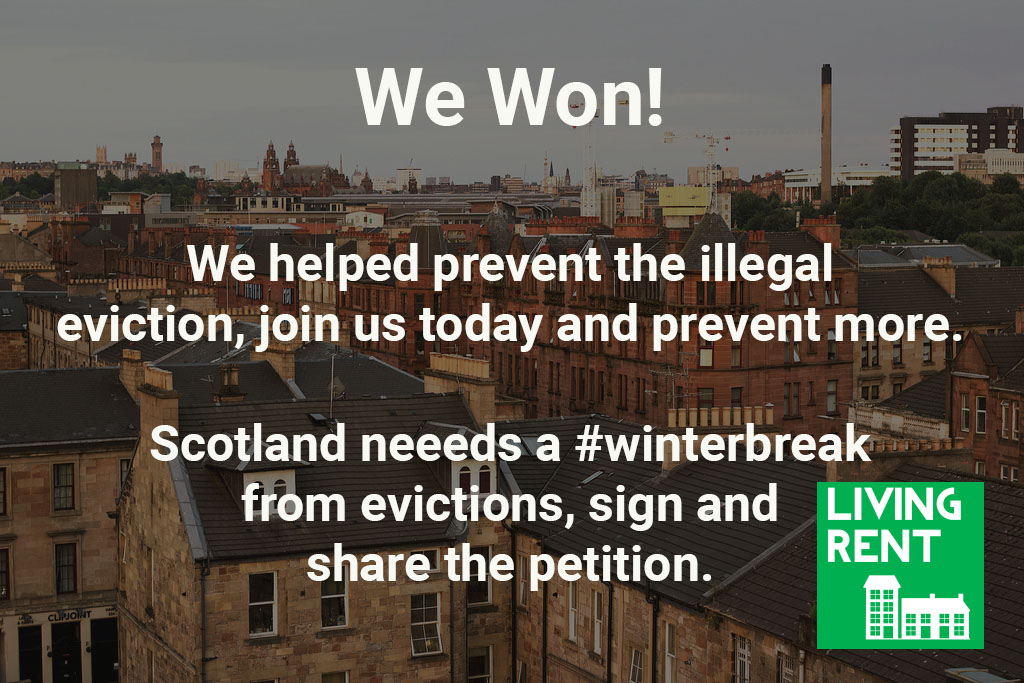 Rory and his partner were faced with homelessness in the depths of winter, through no fault of their own. They have been paying rent every month in a property riddled with damp. Repeated attempts have been made by the tenants to resolve the issue and continue to live and pay rent for the property.

Rory's Landlord had indicated that they will be attempting to take possession of the property on the 13th of January despite ourselves and Rory's lawyers making it clear that this would an illegal action to take.

The illegal eviction was planned for the 13th of January, the original possession order served was in direct contradiction to their Lease Agreement. The lease agreement stated that any notice period requiring repossession of the property by the landlord, must be the same length of time as the original lease, in this case 6 months meaning the earliest they could legally take possession of the property to be April 2018.

Alongside a letter and support from Legal Services Agency Rory made it clear that this eviction would be illegal and members of his tenants union would be out to resist any attempted eviction should the landlord choose to go ahead with this action.

Living Rent members in the city came to Rory’s aid and agreed on an action of resistance should any attempts be made to illegally evict Rory or his partner. The call sent across the city to attend a defensive action outside the property on the 13th of January, received massive support with 150 tenants responding to the call to support their fellow union member.

The combined pressure has forced the Landlord to reconsider and word has reached us that they hand delivered a new notice period for April and retracted the threat of court action should Rory not leave the property by the 13th of January.

The fight is far from over, Rory has still been asked to leave the property in April and there has been a point blank refusal to make any serious effort to remedy the state of disrepair within the property. Whilst we will be supporting our member in ensuring the best possible outcome, this victory highlights the power that being a member of an organised union of tenants can bring, when dealing with any Landlord or Letting Agency who are acting illegally!

A #winterbreak would mean the temporary suspension of all evictions during the harsh winter months. You can read more about our campaign and sign the petition here: https://www.change.org/p/scottish-government-stop-winter-evictions-scotland-needs-a-winter-break