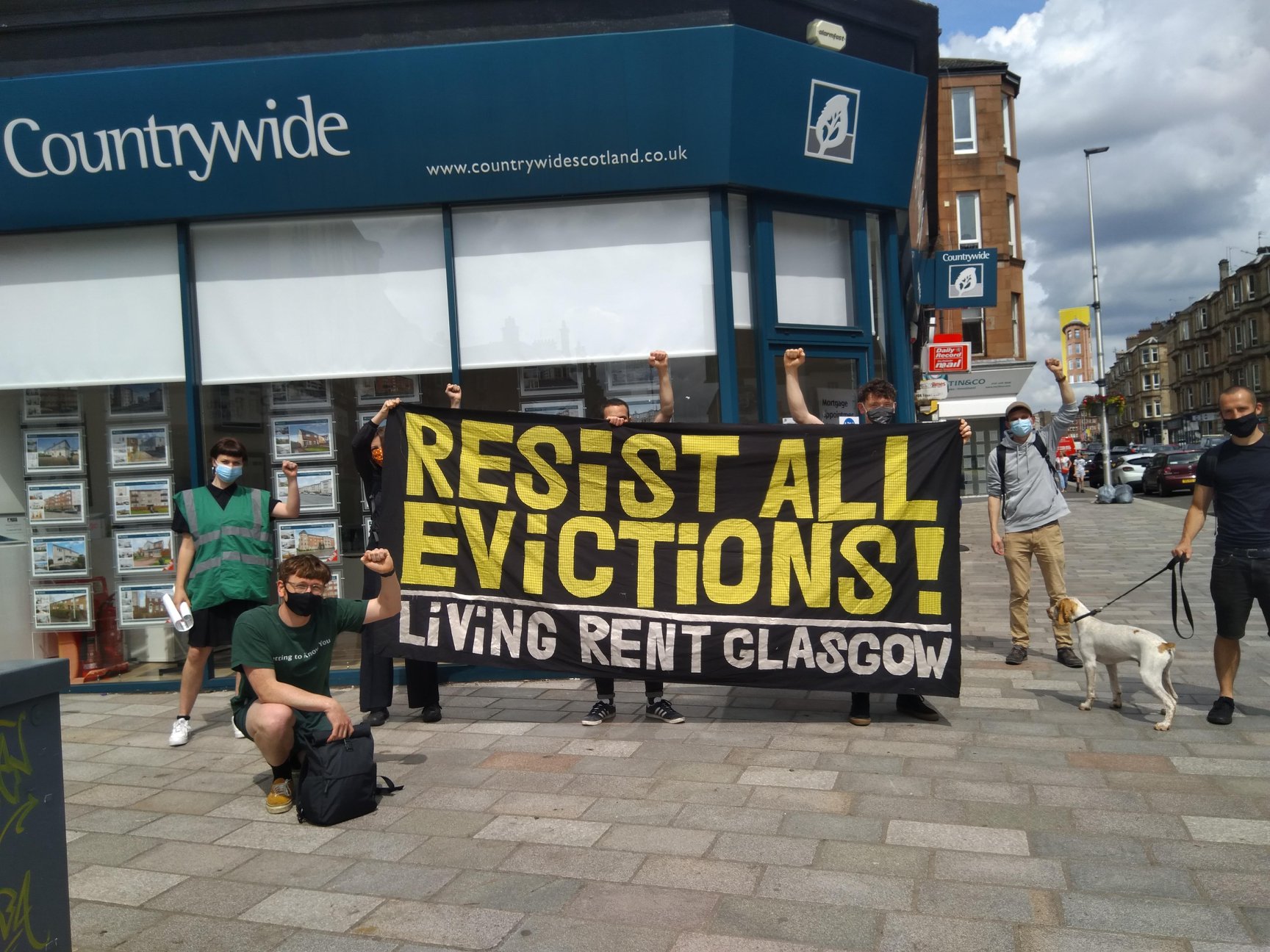 National day of action to protest re-opening of housing tribunal

On Thursday 9 July, members of Living Rent targeted letting agents, landlords and Tribunals in Glasgow and Edinburgh ahead of a wave of threatened evictions. On the day of the reopening of the First Tier Tribunal on July 9, the action came as a warning to housing providers that attempts to evict tenants will be met with resistance.

Living Rent Members in Edinburgh and Glasgow put up warning notices at dozens of letting agencies in the two cities, and made their presence felt outside the First Tier Housing Tribunal, where disputes concerning private tenancies are heard. The Living Rent members, all of whom were PPE-protected and physically distanced, in doing so issued a warning to letting agents and housing associations. They also gathered outside the Tribunal, and posed for photos outside their own doors, thus marking the three locations where they claim evictions will be resisted. 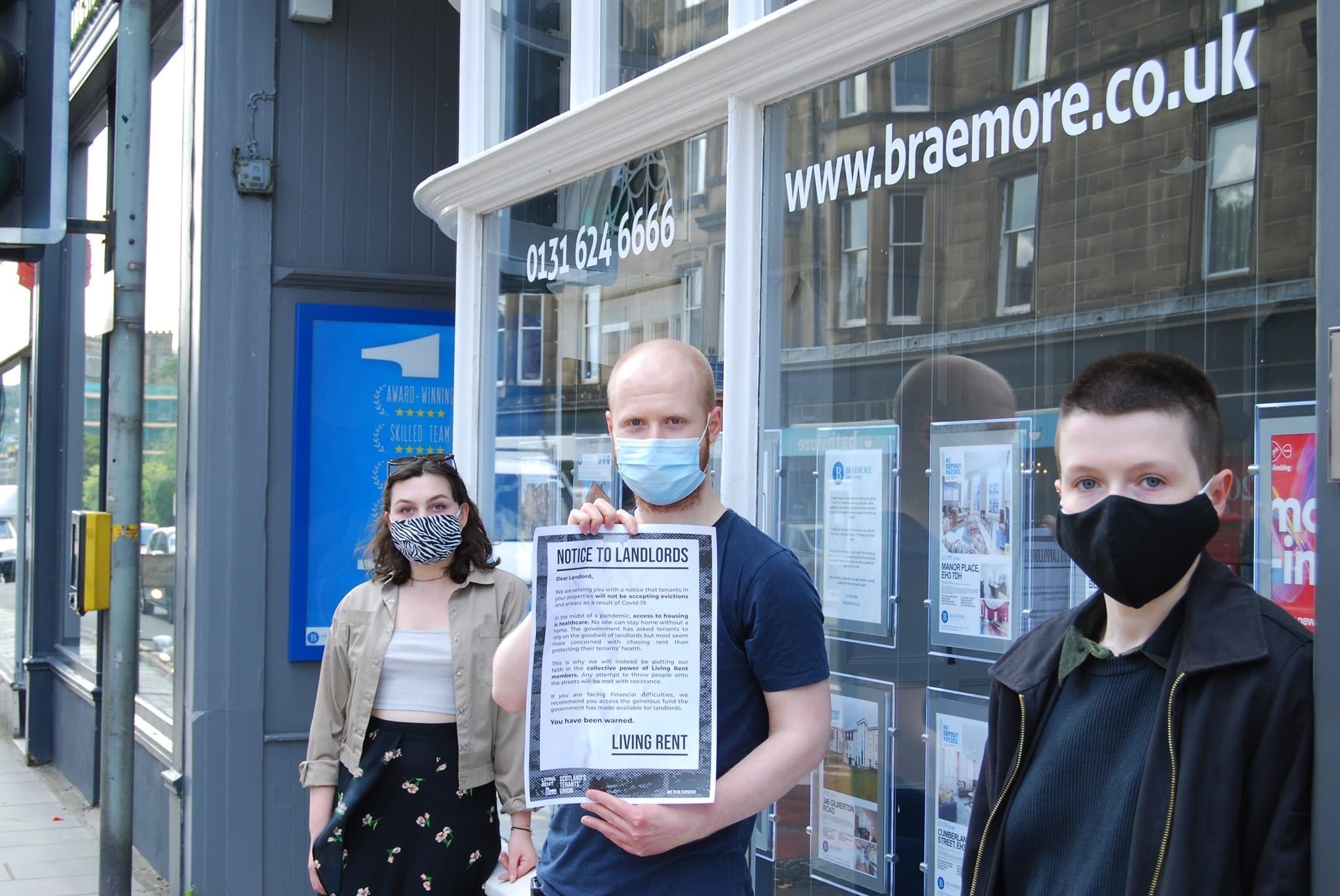 The action comes as Shelter England reported 230,000 tenants could lose their homes in the aftermath of the lockdown and Shelter Scotland reported a 37% rise in applications for crisis grants. Scottish charities and housing organisations are calling for an extension to the eviction ban and for the Scottish and UK governments to address the devastating amount of rent arrears accrued during lockdown due to the mass furlough and job loss.

“Throughout the course of the pandemic, thousands of people have fallen into rent arrears through no fault of their own. Living Rent members are united in asserting that housing is health, and that evictions during and in the aftermath of an outbreak of a highly infectious disease are immoral and unworkable.” Sonja Coquelin, Living Rent Chair. 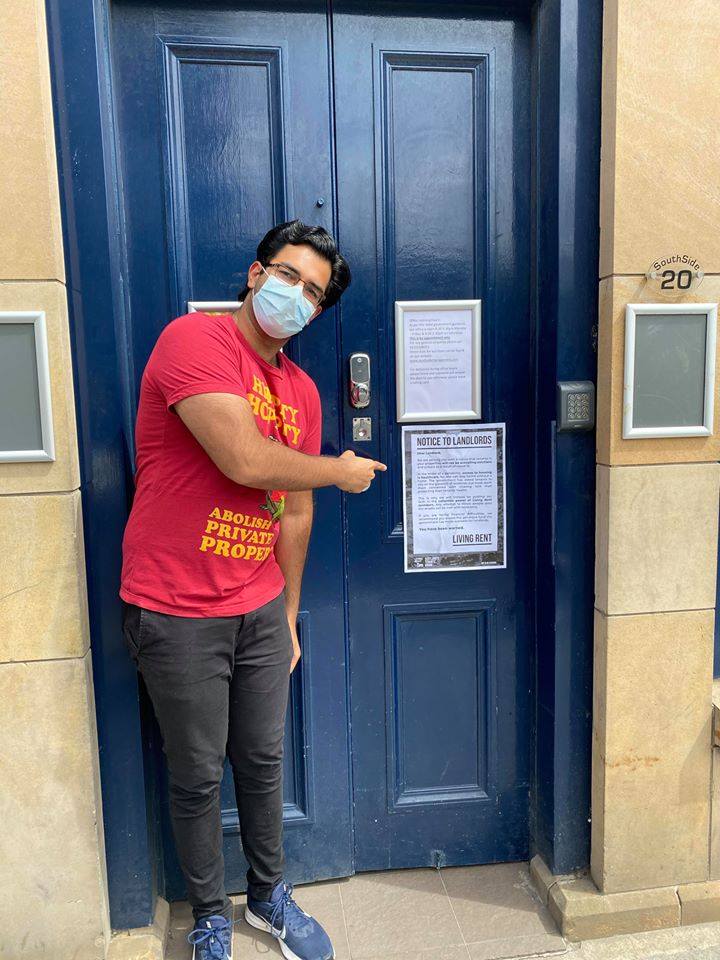 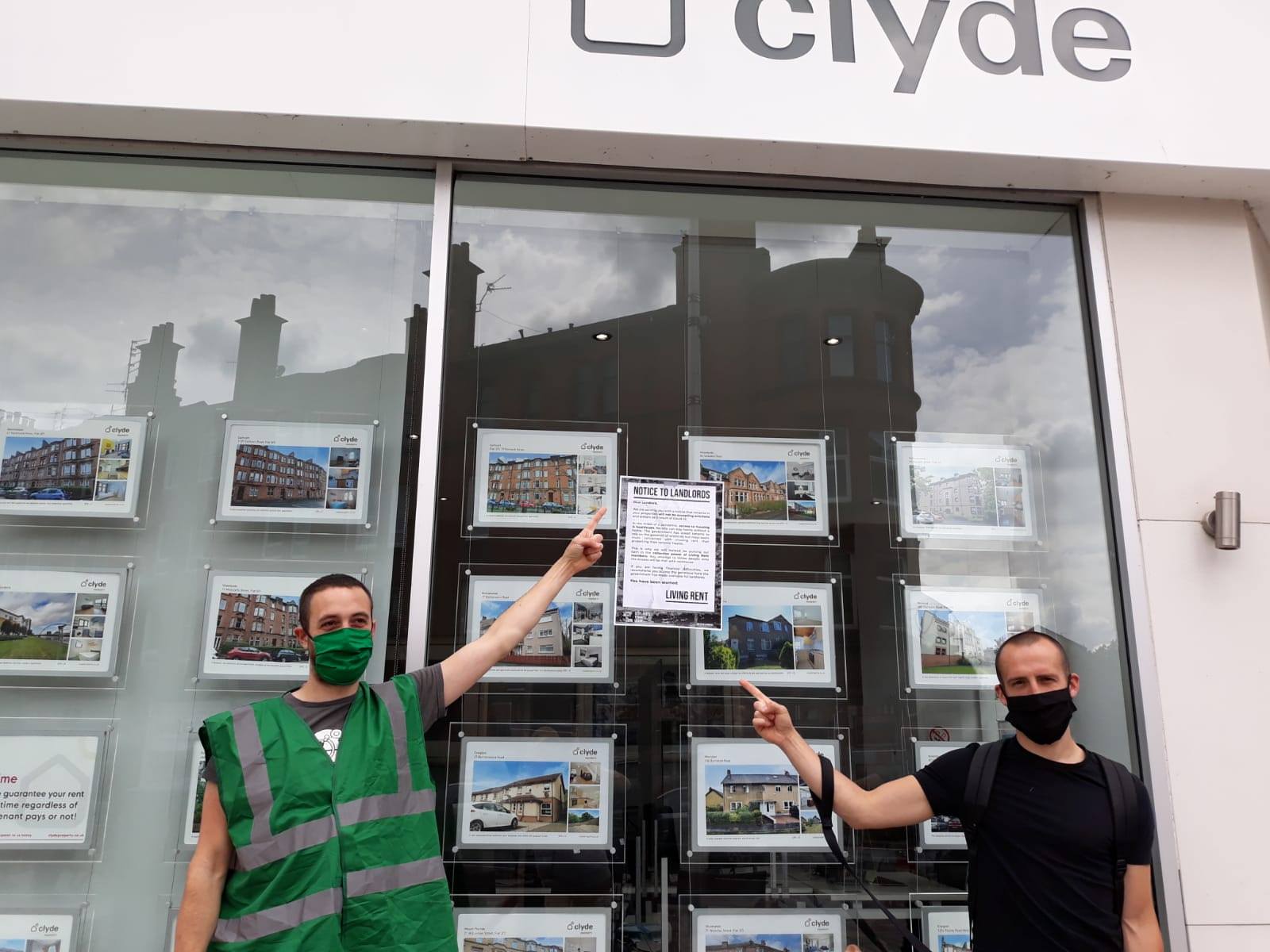 “The government support extended to landlords has no guarantee of ‘trickling down’ and the guidance on supporting tenants is in no way made mandatory. Tenants in my block who have accrued rent arrears face imminent eviction after the eviction moratorium ends, and many have already either decided to leave flats they can no longer afford or have been harassed into leaving by our landlord. Through communicating with each other and Living Rent, we have resisted scare tactics and exposed unlawful eviction notices, but we need support from the government.” Siri, Living Rent Member 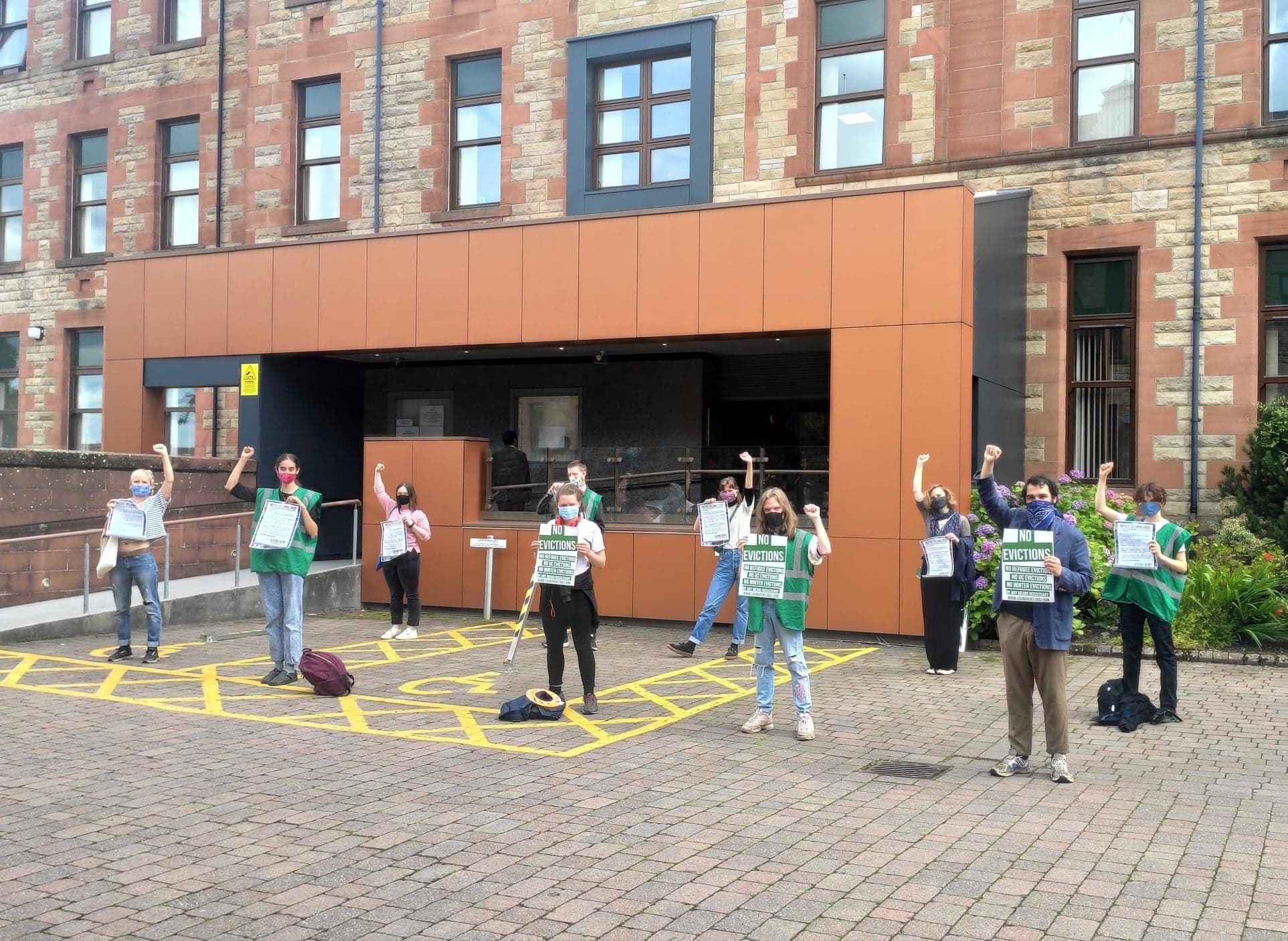 “After an exhaustive pursuit for basic sanitation provision during the onset of the global Covid19 pandemic, and with the indispensable support of Living Rent Tenants Union, my Landlord assented to install an immersion boiler tank. I was forced to temporarily move in with a relative until the situation was remedied.  On the day that the tank was installed and the first time I had sufficient hot running water, the Landlord served me with a Notice to Leave, citing personal circumstances requiring her to move back into the property. My quality of life in the property has been diminished as a direct result of the negligence of the Landlord and Letting Agent, my basic rights as a tenant have been ignored and not respected as they should have. The whole incident has affected my mental health and now I am forced to find other accommodation.” Brendan, Living Rent member 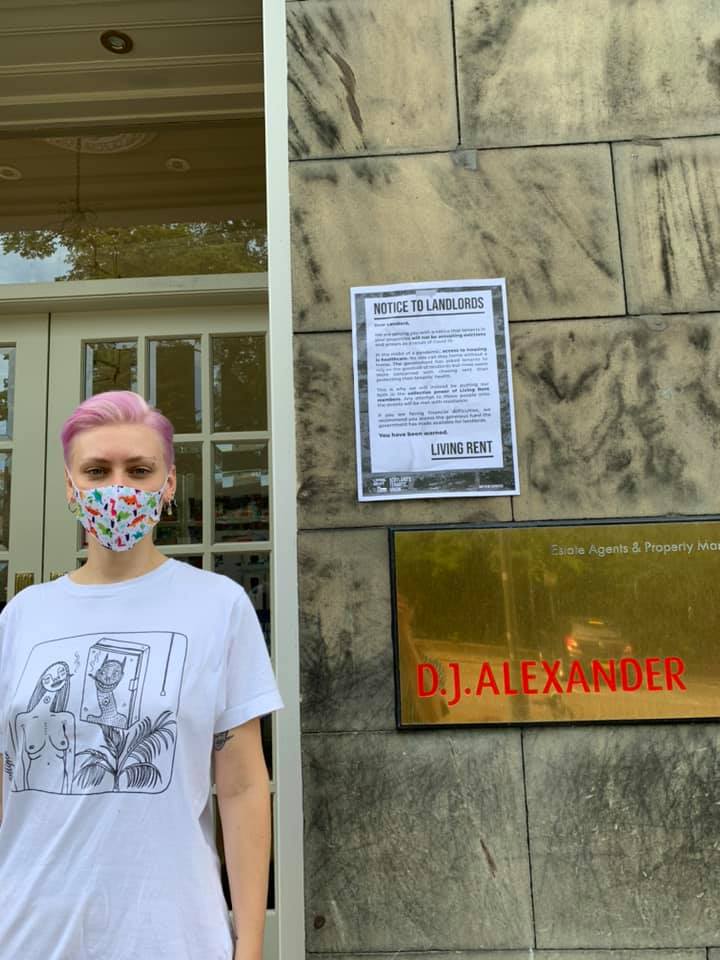 'July 9th marks the day when landlords can be granted eviction orders and make their tenants homeless. Living Rent has seen that landlords have not waited for the Tribunal’s reopening to pressure tenants to leave their homes, many have harassed or manipulated tenants to leave during the pandemic. Living Rent members are out today to say clearly that will not wait for a homelessness crisis, we are going on the attack. We will resist evictions by going to the landlords and letting agents' doors, showing support outside the court and defending our members’ doors.’ Jack Hanington, Member Defence co-ordinator