One week, One city, One Tenants’ Union, One Global Multinational, 300 illegal evictions

One week, One city, One Tenants’ Union, One Global Multinational, 300 illegal evictions 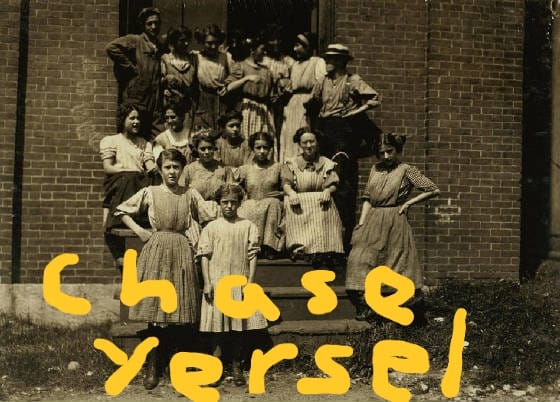 Since we launched the Glasgow branch of our tenants’ union in July 2017, our members have been committed to organising their neighbourhoods against all evictions, homelessness, housing in bad repair, extortionate rent and illegal fees.

We have fought and won on nearly every front. Our membership has rocketed. And most importantly, through every victory, large or small, we have been able  to grasp and experience the power for change locked within each one of us. Despite our members being stretched beyond imagination, we have continued to fight successfully on multiple fronts: a campaign to prevent winter evictions; organising for greater enforcement in stamping out illegal fees charged by letting agents; direct action in defence of our members; and the daily work of organising, fundraising, and educating. Our capacity to fight effectively on behalf of tenants, and as tenants ourselves, has grown every day.

When the news broke that Serco – a global multinational company – was publicly planning to change the locks on over 300 properties they did not even own, the homes of asylum seekers and war refugees, our members, like thousands of others, were chilled to the core. Through all our work, never before had we seen such a brazen and callous attempt to force so many people onto the streets. The belief that everyone should have the right to a decent, affordable home is our most basic driving force. Serco’s sole motive is profit, and they were willing to provoke a humanitarian crisis to achieve it.

Regardless of who the tenants were, a global, profit-driven machine was planning to illegally remove 300 people’s access to a safe and secure home in our city. As a tenants’ union, there was no doubt in our minds that action had to be taken.

Here is a breakdown of the first seven hectic days in the campaign against Serco’s illegal evictions.

Our city-wide organising team of tenant members met on Monday night to discuss the news and agreed to release a statement denouncing this callous act, calling for action and preparing for a united, community-led response.

By Tuesday we were meeting the organisers of an emergency protest alongside the Asylum Seekers Housing Project and the Unity Centre. We agreed to work together where possible and present a united front against these evictions. During the evening’s demonstrations, a Living Rent member addressed the crowd and we collected the contact details of hundreds of people willing to physically resist the evictions if necessary. 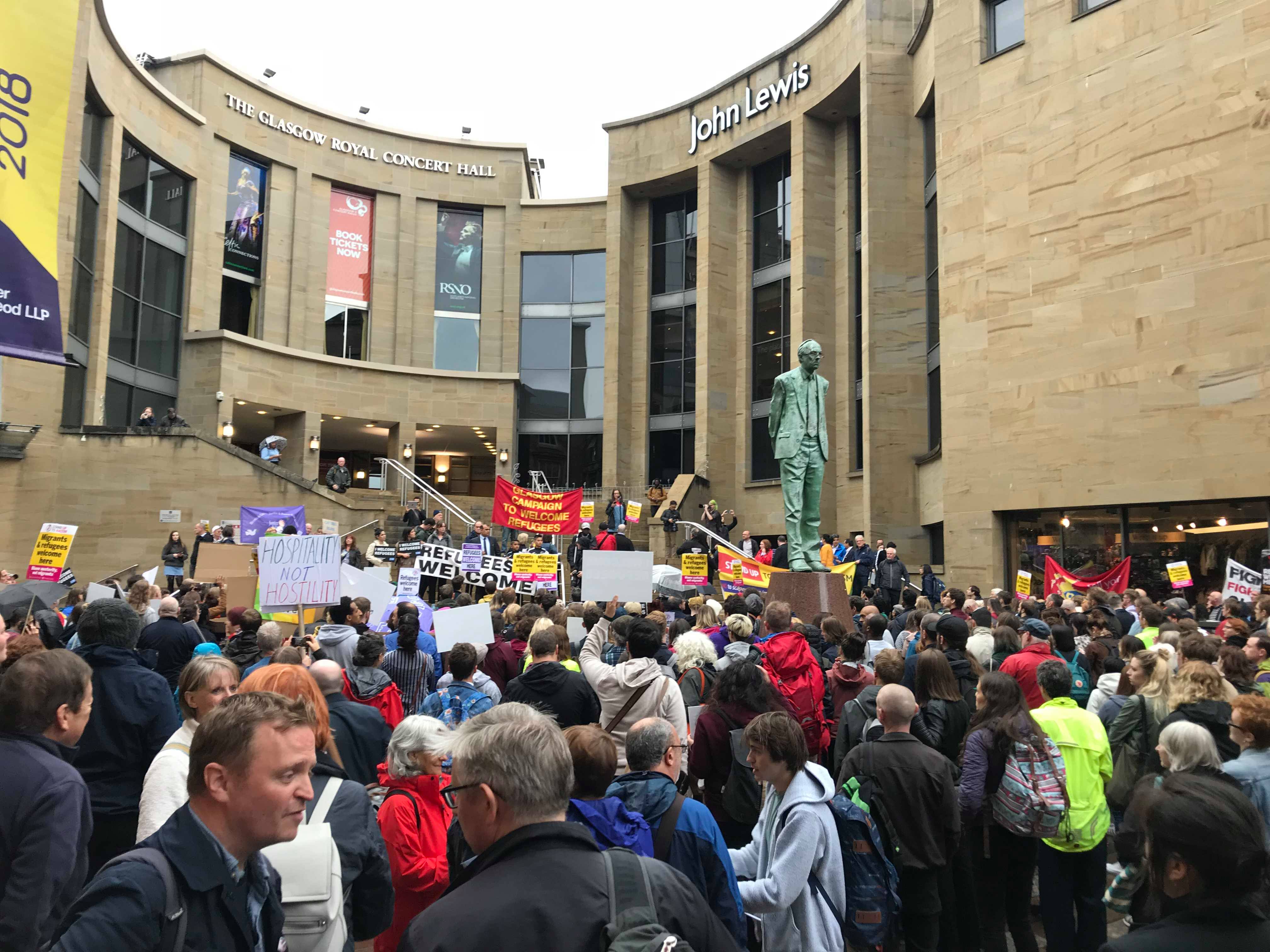 On Wednesday, we hand-delivered a joint ‘Notice to Quit’ to Serco’s main office in the city, requesting that they immediately stop their illegal actions and sit down with the appropriate bodies to arrange a suitable alternative course of action. This was refused. We heard gut-wrenching stories of intimidation, violence and sexual harassment from those who had faced Serco’s management of the asylum system first-hand. 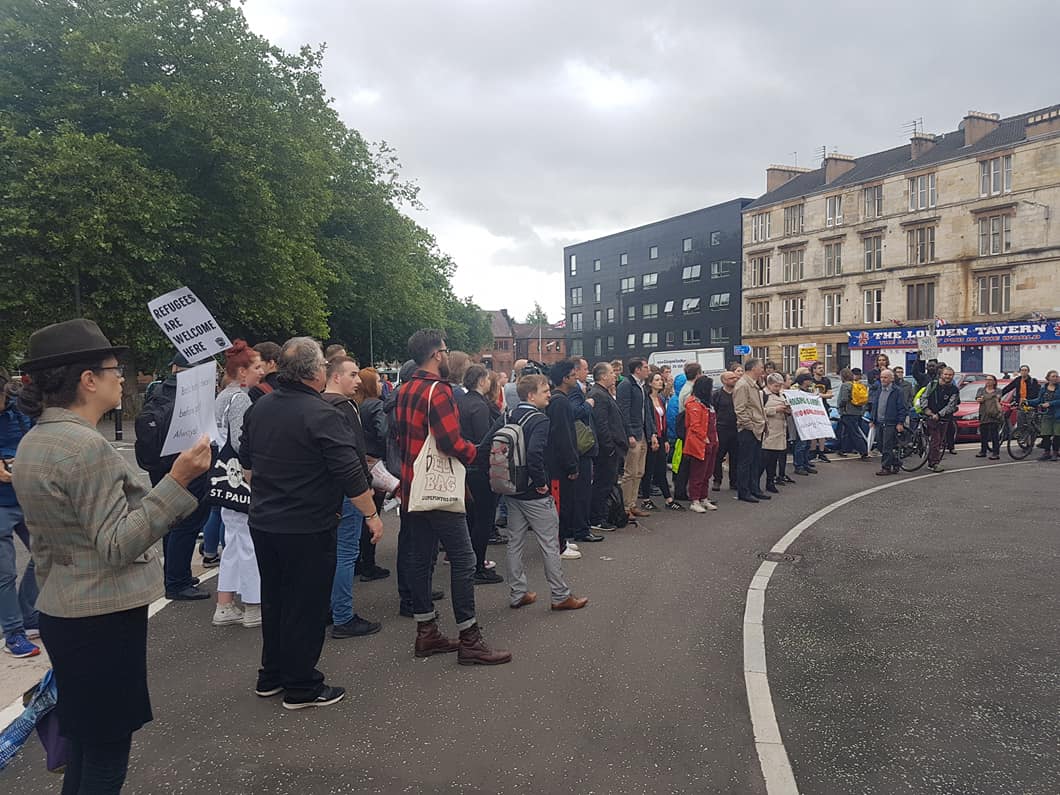 On Thursday, Living Rent members regrouped and started to map out every property that Serco rents in the city, looking at who their landlords were and what pressure could be extended to win the landlords’ support against the lock changes. 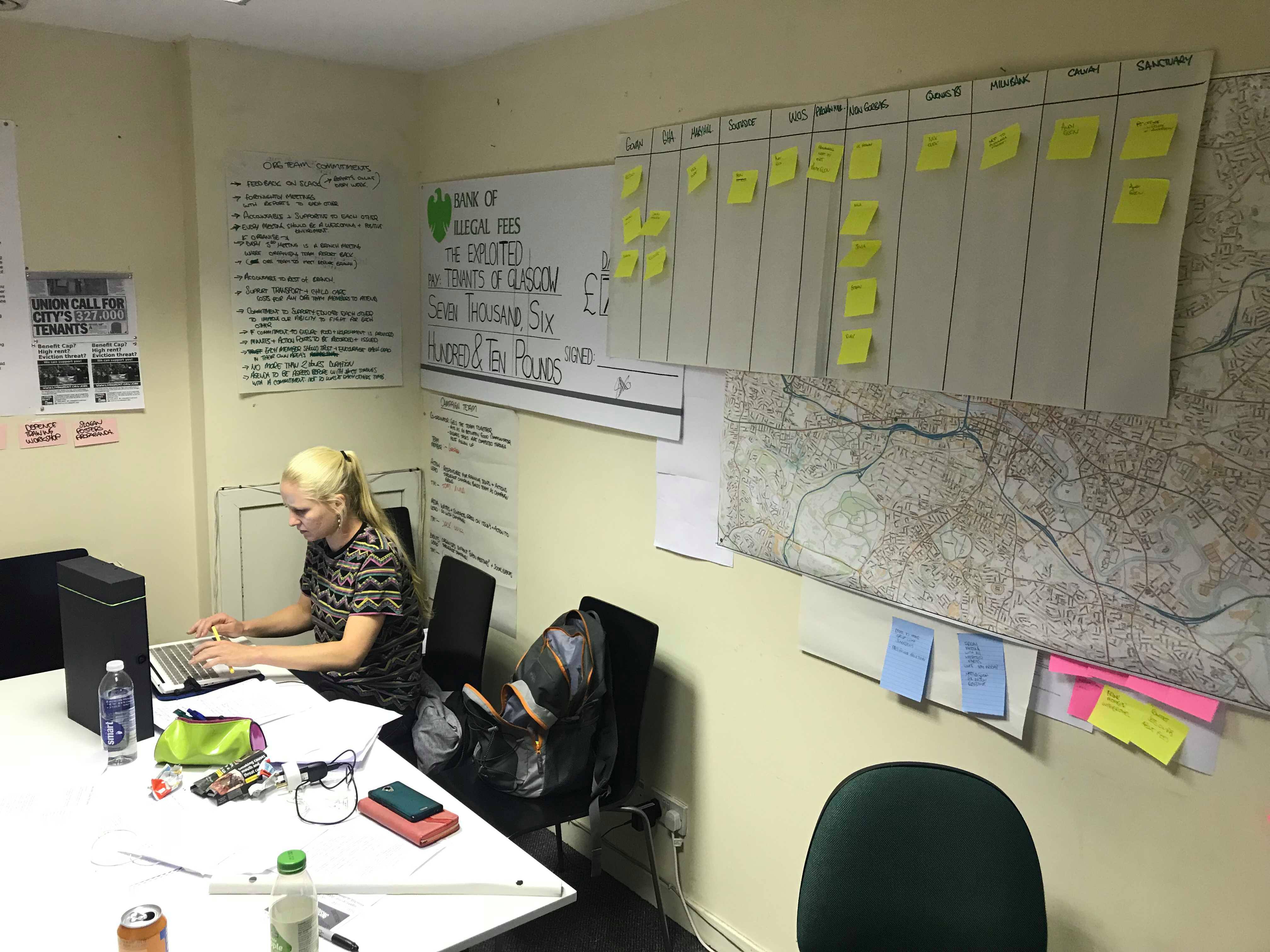 Living Rent members and supporters, volunteers from the Unity Centre, and local Housing Association tenants hand-delivered letters to every Housing Association in the city that provided accommodation to Serco. We requested that they work with us against these evictions, asked for clarity on their position and what action they were planning to take against any proposed lock changes. Different teams travelled across the city and ensured that by the close of play we had spoken to all the relevant HA’s. 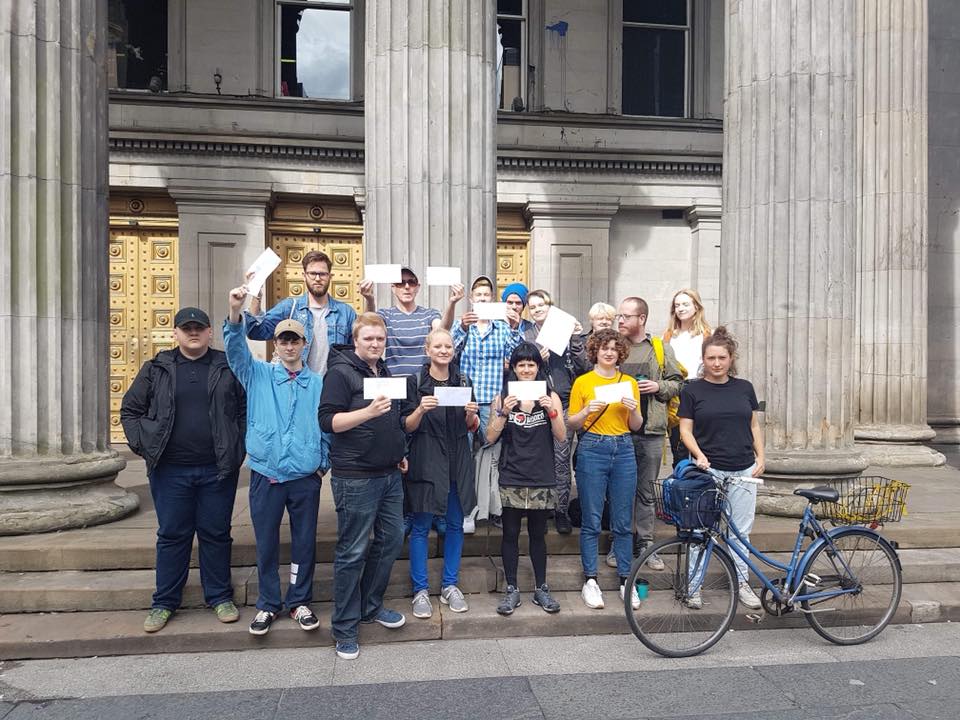 On Saturday, our members attended and supported a demo call by Positive Action In Housing (PAIH), where a member of our city organising team delivered a rousing speech. Our members then headed to the office with other supporters and partners from different organisations involved in the campaign to try and plan out Monday and Tuesday defensive actions on the doors of those directly threatened with eviction.  It was in the middle of this meeting that the news broke from Serco that they were planning to postpone all proposed lock changes!

No rest for the righteous has members of Living Rent, Ash Project, Unity Centre and others met to finalise the defend the doors actions, Members of the 3 organisations travelled to meet 2 of the residents who had been served with a 7 day notice. It was here that the 2 men requested that we attend the vicinity of their home whilst the case was been taken through court.

An early start seen members and volunteers from across the city and beyond gather at a predetermined meeting point in the north of the city. The exact address was only known to a handful of members in the interests of respect and security. With members at the property from the small hours to ensure that no outrageous attempts were made to change the locks on the day of the court case those at the meeting point waited for the phone call and marched to the property still unsure of the outcome and possible actions that may arise from any decision the court made.

With over 80 people standing in solidarity and waiting for the decision from the court, one of the men facing destitution spoke to the assembled crowd through and interpreted thanking everyone for their support and solidarity.

As the news broke that the court interdict would be postponed for 21 days and a commitment from Serco that no attempted lock changes would take place within that time frame many volunteers took to the doors of the local community, engaging and explaining the situation with dozens more coming forward to pledge their commitment to defending their neighbours and their community from any attacks by Serco.

We have forced Serco to temporarily suspend their plans to illegally change over 300 locks in the city, they are running scared of a city united against them. We believe that this is due to the combined efforts on every front, from the courtroom to the street corner. Tenants, Lawyers, Housing Associations, Political Activists and Refugees have organised on every front to ensure that the only hostile environment in our city is the one that Serco face should they press on with this immoral and illegal course of action.

We have forced the Immigration Minister and Rupert Soames a major shareholder in Serco to fly to Glasgow for secret talks with the City Council, conceding to allow at least some democratic oversight to every single case where someone is facing illegal eviction.

We have forced the Scottish Government to step in and pledge £100,000 pound to groups and organisations that will be left to provide the much needed shelter and support should the worst happen.

None of this would have been imaginable last week, none of it possible without the combined efforts of everyone involved. We congratulate the work carried out by all the various agencies across the city and steady ourselves to remain organised and committed to bringing a complete end to the bullying, harassment and forced destitution of everyone in our city.

Over the next few weeks our members will continue to work closely with every organisation and every volunteer that has come forward pledging their time and effort, we hope to build localised anti-eviction groups that can continue to practically support and defend their neighbours whilst reaching out and winning the arguments on the door steps. 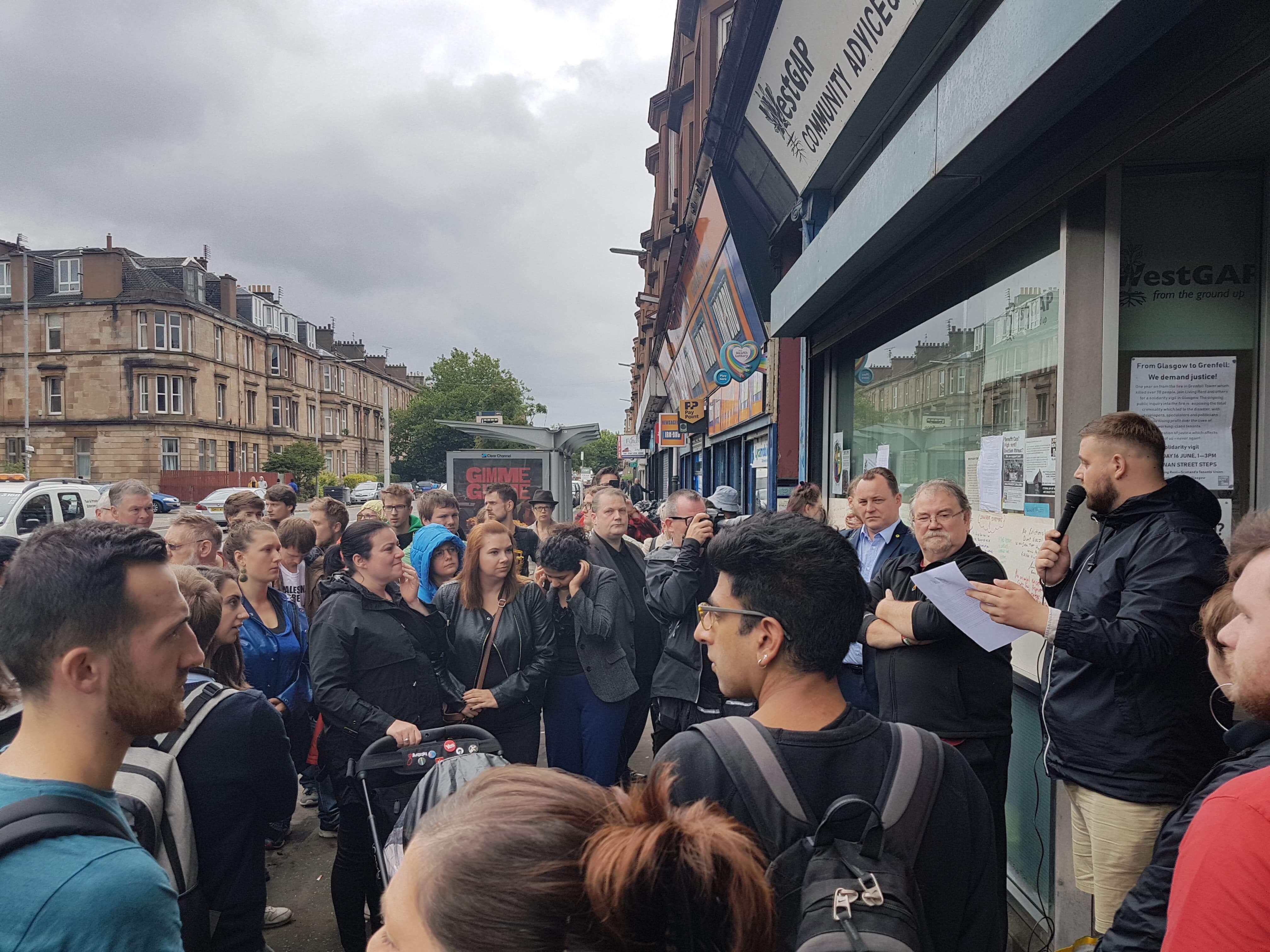 Over 70 hours of volunteer research has been carried out to determine the name and address of every private property firm Serco lease property from in the city. We plan to engage and encourage (through direct action of course)  these property firms to follow the excellent example set by the city’s Housing Associations and come out against the lock changes.

A clear precedent has been set, you and i would be unable to change the fixtures and fittings in any home we rent, the same must be applied to Serco. We have cleared the ball off the line it's time to go up the park and score.

If you haven’t already but would like to volunteer to oppose these evictions please sign our volunteer form here.