Rent and Its Discontents book launch

Don't worry if you've missed it, you can read a detailed report of the event here.

Since its establishment as a tenants’ union, Living Rent has recognised that we do not exist in isolation: either from the history of working class struggle around housing in Scotland, or from the movements across the world fighting for housing justice. Perhaps more than ever before, the centrality of the housing question to anti-capitalist organising is being recognised. The role of a tenants’ union is not just to support the day-to-day fight against exploitation, eviction and the tyranny of rent, but also to provide a framework for understanding these material realities as structural results of a profit-driven housing market. It is only through a continuous process of collective action and reflection that we can both understand and change this reality in a radical and meaningful way, drawing together the hundreds of threads of everyday resistance into the kind of mass action which, historically, has been the only way to secure any kind of justice.

Rent and Its Discontents: A Century of Housing Struggle (2018) marks a crucial new intervention into this process. Taking as its starting point a valuable reassessment of the real dynamics and significance of the 1915 Clydeside rent strikes, it provides a committed and scholarly framework for debates over the history, experience, strategy and tactics of the radical housing movement. Edited by Neil Gray (University of Glasgow), housing activist, writer and researcher and Living Rent member, and with a chapter contribution from Living Rent members, the book is set to play an important role in guiding debates amongst activists and organisers today.

That a real hunger for such a contribution exists in Glasgow was in evidence on Tuesday 22 January, when over sixty people crammed into a room in Lilybank House at Glasgow University to mark the book’s launch. The diversity of the crowd in attendance was heartening to see, and it is clear that debates over financialization, commodification and land value are no longer confined to the academy. The author made the book available on the night at a heavy discount (they flew off the table!), to ensure that its lessons do not remain behind the paywall of prohibitively expensive academic publishing prices. The Glasgow branch of Living Rent bought a copy for its library and we encourage all members to borrow, share and read! 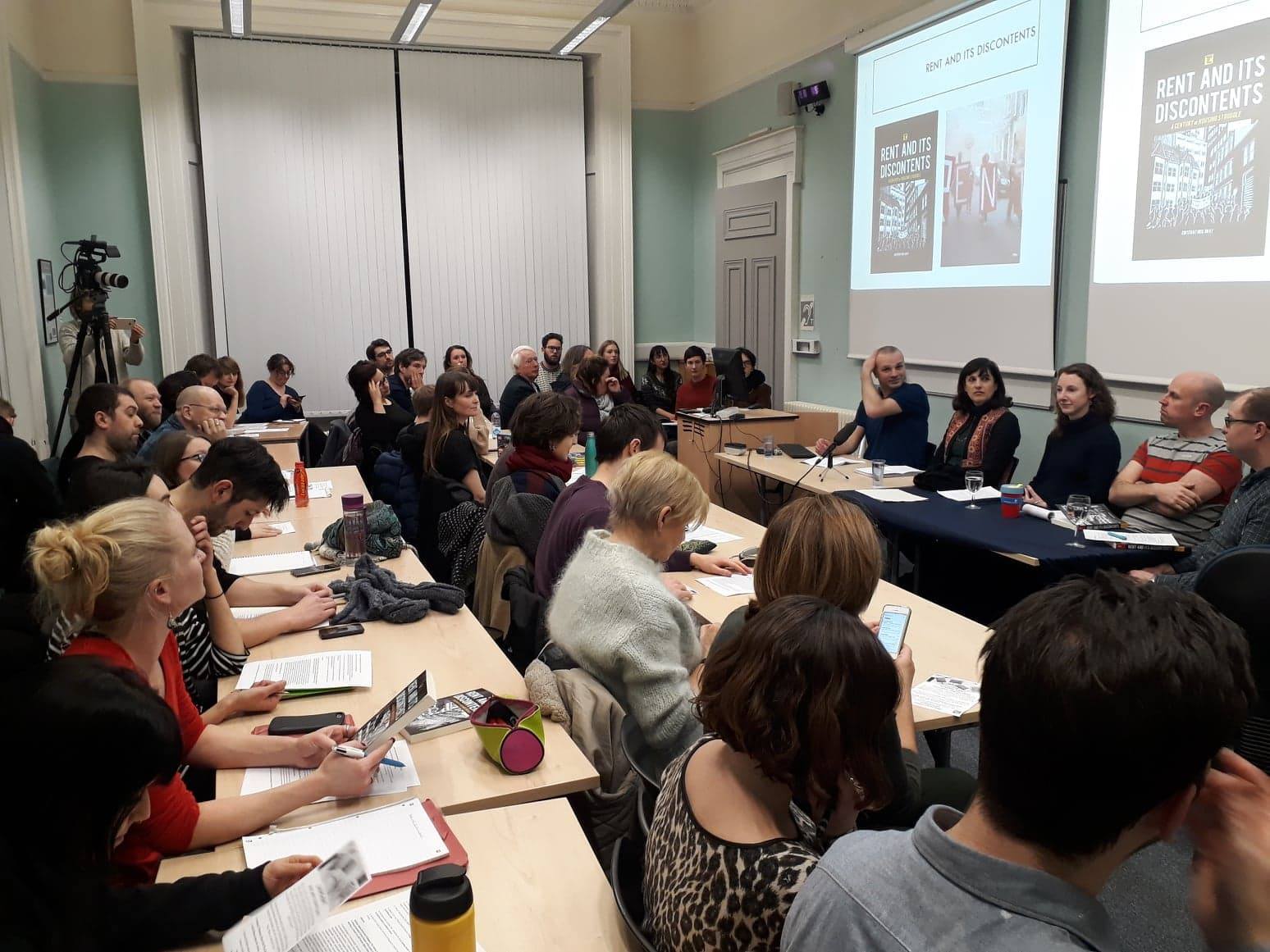 The event comprised short presentations by five of the book’s authors, followed by a Q and A. Neil Gray provided a brief but devastating contextual overview of the book’s common themes. He started off by noting that housing crisis is not a partial failure of the system, but an outcome of the normal functioning of the system. He noted, for instance, that the US ‘sub-prime’ housing crisis of 2007-2008 only contained around one-sixth of genuinely sub-prime mortgages; the rest was business as usual. He described the decimation and stigmatisation of public housing over the last four decades and how the destruction of housing supply had fostered escalating house prices and rents in both the public and private sectors. He also made a polemical critique of the operation of Housing Associations, noting that completions and new builds by HA’s in England now only comprised around 10% of genuinely social rented properties, with the rest coming in as private housing, mid-market housing and so-called affordable rates (in fact 80% of the market rate). Overall, he argued that housing has become increasingly central to many national economies and this necessitates a more structural understanding of wider dynamics for housing movements.

The other speakers all raised points of direct relevance to Living Rent today. Valerie Wright (University of Glasgow) highlighted the tension in the rent strike movement between community-based, women-led militant direct action and the increasing formalisation and respectability of the Glasgow Women’s Housing Association. This led to a questioning of the ‘capture’ of the housing question by the Labour Party and ILP and a diminishment of the direct action women-led tactics that were so important to the 1915 rent strikes. She also denied that a focus on housing and community issues represented a confinement of women’s activity to the domestic sphere. Drawing on the materialist-feminist Sylvia Federici, she contended that housing, food, and prices were at the forefront of working class women’s material concerns throughout 1915 and through the interwar period, and a ‘politics of the kitchen’ was inevitably the ground they fought on. Such arguments remain highly relevant today, and it is clear that conceiving housing struggle as part of a wider struggle around the social reproductive sphere (welfare, housing, community, transport, etc.) can provide a very useful context for Living Rent and other housing groups.

Cian O’Callaghan (Trinity College, Dublin) demonstrated the crucial connections between the changing structural nature of the housing crisis in Ireland over the last few decades and the forms of resistance that have emerged in response. From long-established community campaigns, to wider anti-austerity alliances, a focus on gendered forms of homelessness, and occupations around private rents and slum conditions, it has been necessary for housing activists to constantly search for the new forms of action in relation to changing material circumstances which best foster the mass movement necessary to challenge the devastating social consequences of a hyper-financialised housing sector. Cian’s presentation effectively showed the necessity of direct action housing organisation, while demonstrating the necessity of grasping wider structural economic dynamics to ensure that such activity effectively targets the real contradictions that tenants face in everyday life. Housing struggles in Ireland have been pitched at a very high level in the context of rental costs as high as London in many cases. There is much that Living Rent can learn from these struggles.

Sarah Glynn (independent scholar and activist) described a situation familiar to many of us. In the heat of everyday battle, it can be difficult to give ourselves time to imagine what a just model of housing would look like. The rent strikers of 1915 had a clear vision of an alternative—‘municipal housing now’—and we too must have our own. She offered a valuable defence of council housing, which the left has been strangely reticent about for some decades now. She argued that we must not fall into the trap of associating public housing with the under-invested and under-maintained forms that have been so heavily stigmatised in recent decades. She provided a vision of community-based public housing within an eco-socialist framework, and specific policies (such as a land tax), which will be the subject of much useful debate. While this vision is admirable, the question of how such aims and demands can be put into practice remains crucial: making polite requests to elected leaders for more equitable housing will not be sufficient.

Stuart Hodkinson (University of Leeds) began his contribution by claiming the book would be a ‘future classic’, highlighting the range of its concerns, and the essential lessons it contains. He asked the crucial question that faces us today: How do we decommodify housing? How do we win? He also asked what could be applied from the experience of 1915 today. Many of the conditions that gave the movement its potency no longer apply, after decades of decomposition and fragmentation. But the rent strikers showed how power could shift in a matter of months; that tenants and individuals could act collectively as a class against the landlord class; that power could be flipped. The potency of the rent strike as a specific tactic may not necessarily remain today (though Neil Gray takes a slightly different view in his chapter on the 1915 rent strikes and the housing question), but the rent strikers showed how the ability to collectively act together to stop the circulation of money was possible. By both defensive and offensive struggles over the commons, the main theme of his chapter, political space can be opened up (regulation, rent controls, public housing co-operative housing, squatting and other forms of direct action) and alternative bases of power created. The challenge for us today is to combine resistance to privatisation, increasing housing costs and declining standards and security with genuinely progressive alternatives beyond capitalist realism. Watch this space!

The meeting ended with lively contributions from the floor and the debate is sure to continue. The Glasgow branch of Living Rent is aiming this year to give members a space to seriously think about where we are and where we want to go; how we can unleash the radical potential of tenant power, and truly understand the nature of the beast we are up against. The branch will be organising another event around Rent and Its Discontents with other chapter contributors who were not present at the University of Glasgow. We aim to use this event to prompt further discussion, and use it as a platform to establish reading groups and education around the housing question for members and the wider public alike. A century of housing struggle…and a few more years to come!