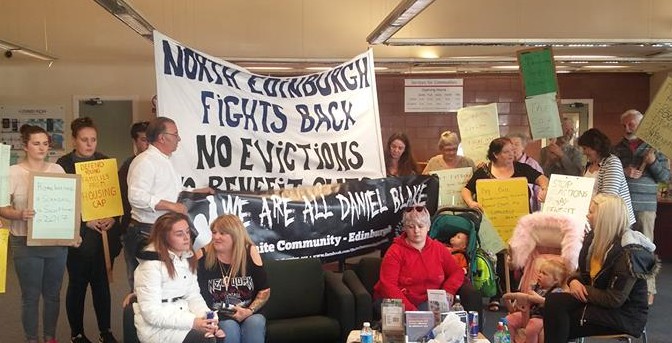 Over 3600 families, and more than 11,000 children are affected by the Tory Benefit Cap in Scotland, which is leading to real hardship, evictions, and homelessness. We are supporting as many families as we can, and are calling on councils and the Scottish Government to scrap the cap, reduce the rents, and stop the evictions.

Scotland's high rents, and this new arbitrary cap on the amount of benefits a family can receive, are causing poverty and rent arrears. On average families in Scotland are losing out on £60 per week, and many families are losing out on hundreds of pounds per week. A big issue with the cap is due to the high rents that are being charged to tenants across Scotland, and it is often private tenants who have been the worst affected.

In North Edinburgh we supported Melissa Gaynor, 26, and her three children, who was being evicted by her landlord. Her landlord had been charging an extortionate £800 for an ex-Council flat. Melissa had been getting housing benefit that covered the rent, but when the benefit cap took effect in January she was expected to pay the £372 a month shortfall herself despite having no other income.

Initially the Council had offered Melissa terrible temporary accommodation far away from her kids schools, and her support networks. We joined an occupation of the North Edinburgh Housing Office, and the City Chambers, and as a result of those actions Melissa won more suitable accommodation near those schools, and near friends.

Following this action we have been doing solidarity stalls outside primary schools, to reach out to families being affected by the cap. If you can help us, or know anyone who is affected, please get in touch!