Update on the Serco campaign

Glasgow member George talks us through the last couple of weeks in the campaign against Serco's illegal evictions.

This week Living Rent and the Unity Centre collaborated again in calling a demonstration at the offices of Serco to mark the end of the 21 day postponement Serco placed on their recent plans to evict more than 300 asylum seekers in Glasgow. Those plans when announced caused a massive public outcry which has since sparked into a movement of resistance. An ongoing legal challenge which will dictate the legality or illegality of Serco's mass eviction but the verdict from the Court of Session may not be heard for some time. In the meantime Living Rent members have worked tirelessly, in coalition with a number of others, to organise the groundswell of public opinion into an effective campaign aimed at countering plans which if left unchecked might bring a humanitarian crisis to the streets of Glasgow. 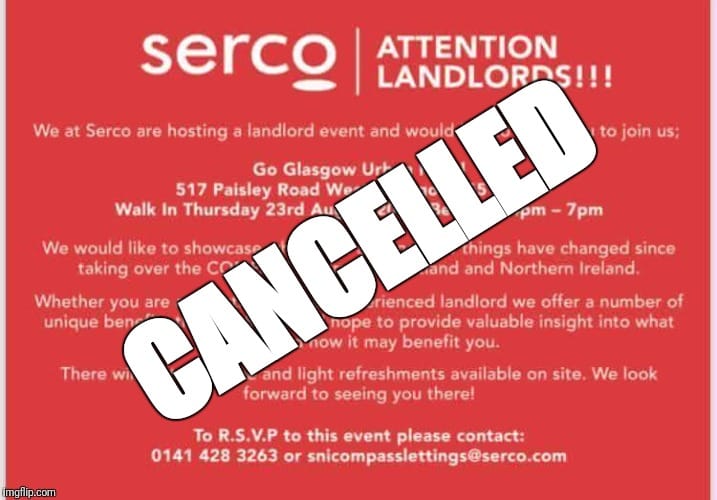 Monday's action saw members of Living Rent, members of the Unity Centre and an array of concerned Glasgow residents all come together to demonstrate that the vulnerable people who have made this city their home have the solidarity and support of their local communities behind them, regardless of the verdict of the courts. Messages of protest were chalked on the ground and materials on eviction resistance strategies that have been successful for groups and campaigns elsewhere in the world were disseminated and discussed. After a brief speech from a Living Rent member, the crowd drew together and linked arms in front of the office's front door in a small demonstration of what may lie in wait for Serco if they do not heed the widespread calls for them to ditch their programme of evictions. 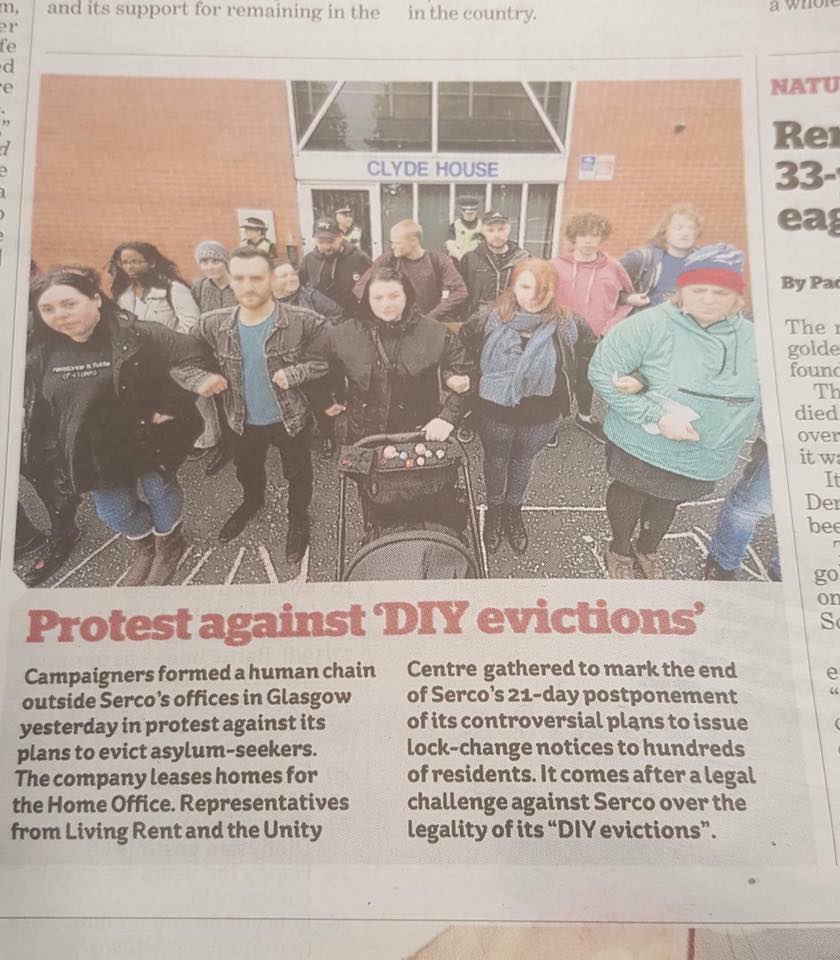 The action was only the latest in a relentless campaign driven by a coalition united by a belief in decent, secure and affordable housing for all. Two initial demonstrations brought out huge numbers and from those events, along with a successful online drive, the contact details of over a thousand people with a confirmed interest in resisting Serco's evictions were accrued. With members of the communities that house asylum seekers, Living Rent members then went out to speak with those in the social rented sector who rent properties to Serco. Those conversations clearly had the desired affect as several housing associations including GHA promptly released strong statements condemning Serco's proposals and spelling out in no uncertain terms that any lock changes would be in breach of their contracts and would not be permitted.

The focus then shifted to the private sector as hundreds of letters were sent to landlords who rent properties to Serco. The Living Rent Edinburgh branch sought out the Scottish Association of Landlords and their efforts were quickly rewarded as the SAL released a statement condemning Serco's proposed evictions, describing them as 'abhorrent'. Again in Glasgow members then took to the streets with community support and even the backing of MPs to visit to any and every letting agent who has business with Serco. 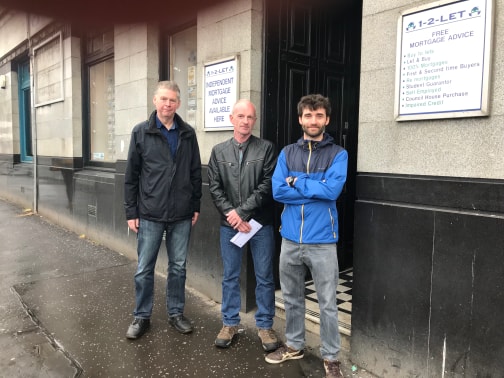 The responses received were varied. Early exchanges with letting agents were productive, as many expressed concern at what they too saw as illegal evictions. However at a certain point the reception notably changed and we started to receive a hostile response from letting agents - some refused to talk to us, one refused to take or open our letter, and bizarrely we even had the police called on our members as well. We subsequently discovered that Serco had been out visiting letting agents in an attempt to combat our interventions and to sure up their support in the private sector.

Not to be outdone, we had a surprise of our own up our sleeves. For our final letting agent visits we were joined by SNP's Chris Stephens MP and Scottish Labour MP Paul Sweeney. The letting agent who had refused to take or open our letter seemed a little surprised as we returned with two elected representatives in tow. They took our letter on this occasion - though we never did receive a formal response from them. In seriousness it was a great help to receive cross-party support on this issue and their assistance facilitated some very necessary and productive exchanges.

While we encountered a frustrating reluctance from letting agents to address publicly and robustly the planned mass eviction as those in the social sector did, there was still a lot that we were able to gain. Several letting agents committed to contacting Serco internally to remind them that any lock changes would require the written consent of the landlord, and Homes For Good let us know that they had done this already. Others were able to let slip some information they thought might help us and will continue to talk with us as the situation develops.

As the verdict from the Court of Session is awaited, it is crucial that this period of time is seen as an opportunity. While we hope to see a judgement that prevents Serco's planned mass eviction, members of Living Rent will be continuing their efforts with a range of allies so that we are all prepared for the worst. In that vein Living Rent will soon be helping to facilitate an eviction resistance training event and we encourage every conscientious citizen of Glasgow to come along. That will likely take place in the coming weeks but the time and place are currently to be confirmed.

Living Rent once again calls on Serco to announce the withdrawal of their plans and reminds them of Glasgow's long and proud history of community action and resistance when it has been necessary to protect our communities. 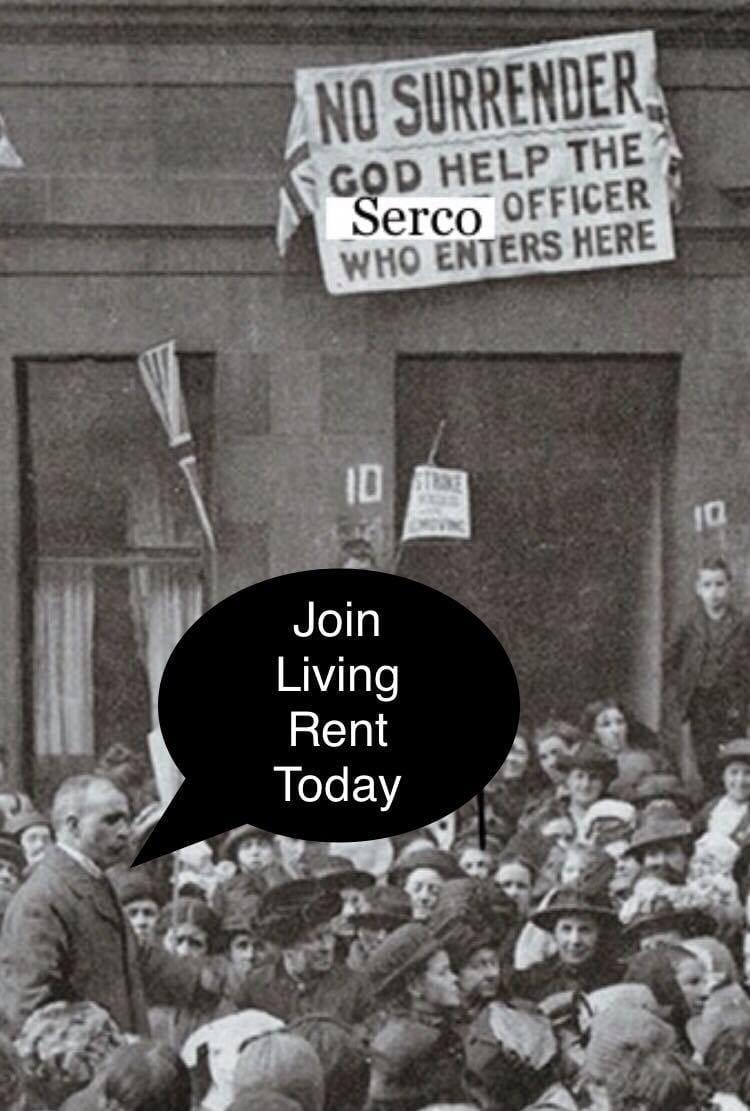