Shawlands Arcade Development: whose interests does it serve?

The proposed development of Shawlands Arcade represents one of the biggest changes to the area in recent years.

Who is behind this development?

HAUS Collective has unveiled plans for the regeneration of The Shawlands Arcade, a well-known landmark at the heart of Glasgow’s Southside. The proposals are being brought forward by the Arcade’s owners and operators, Clydebuilt LP, a property investment and development fund co-owned by Strathclyde Pension Fund and Ediston Real Estate. The Developers claim that the proposed regeneration will create ‘a new, vibrant shopping and leisure experience in the heart of Shawlands and an improved streetscape on Kilmarnock Road’ and ‘provide new homes in this increasingly popular area’.

What is the plan?

Here’s what they announced for the regeneration of the Arcade: 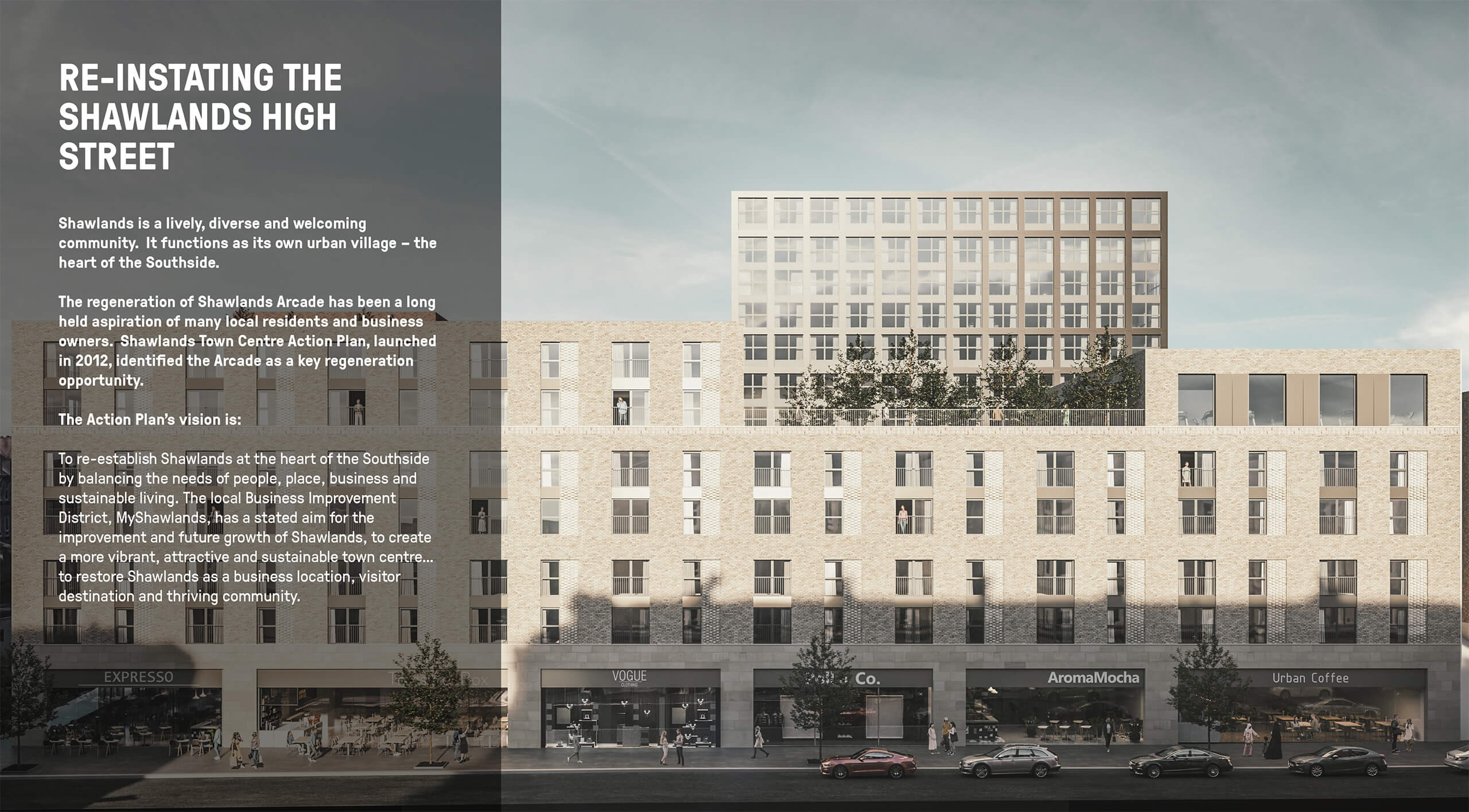 Phase 2 was not specifically discussed as they do not expect to begin work on it until 2024 at the earliest, but presumably they announced another 300 homes totalling in 600 new homes in this already dense area. They see the development as a “regeneration” project and are pitching it as a new town centre which is being developed under Glasgow City’s Town Centre Action Plan 2012. They were big on promoting the 20 min city living scheme recently announced by the council and stressed numerous times that the building will be used by people who are expected to use public transport or cycling/walking.

Shawlands residents have complained about the lack of parking in their neighbourhood and this new development will not include additional parking as ‘We are promoting this as a reduced car ownership development adopting sustainable transport policies that will encourage residents to prioritise active travel and public transport, making the most of Shawlands excellent connectivity and public transport links’. This is simply unrealistic!

The developers were also very much keen to stress the green spaces that will be included in the development and how it will open up new links between Kilmarnock Rd and Eastwood Ave. This may be them potentially anticipating planning objections as what happened at the development of the Victoria Hospital by Sanctuary group. The developers were eventually forced to concede opening up new pathways linking Battlefield to Queens Park and ensuring that it does not turn into a gated community style complex. 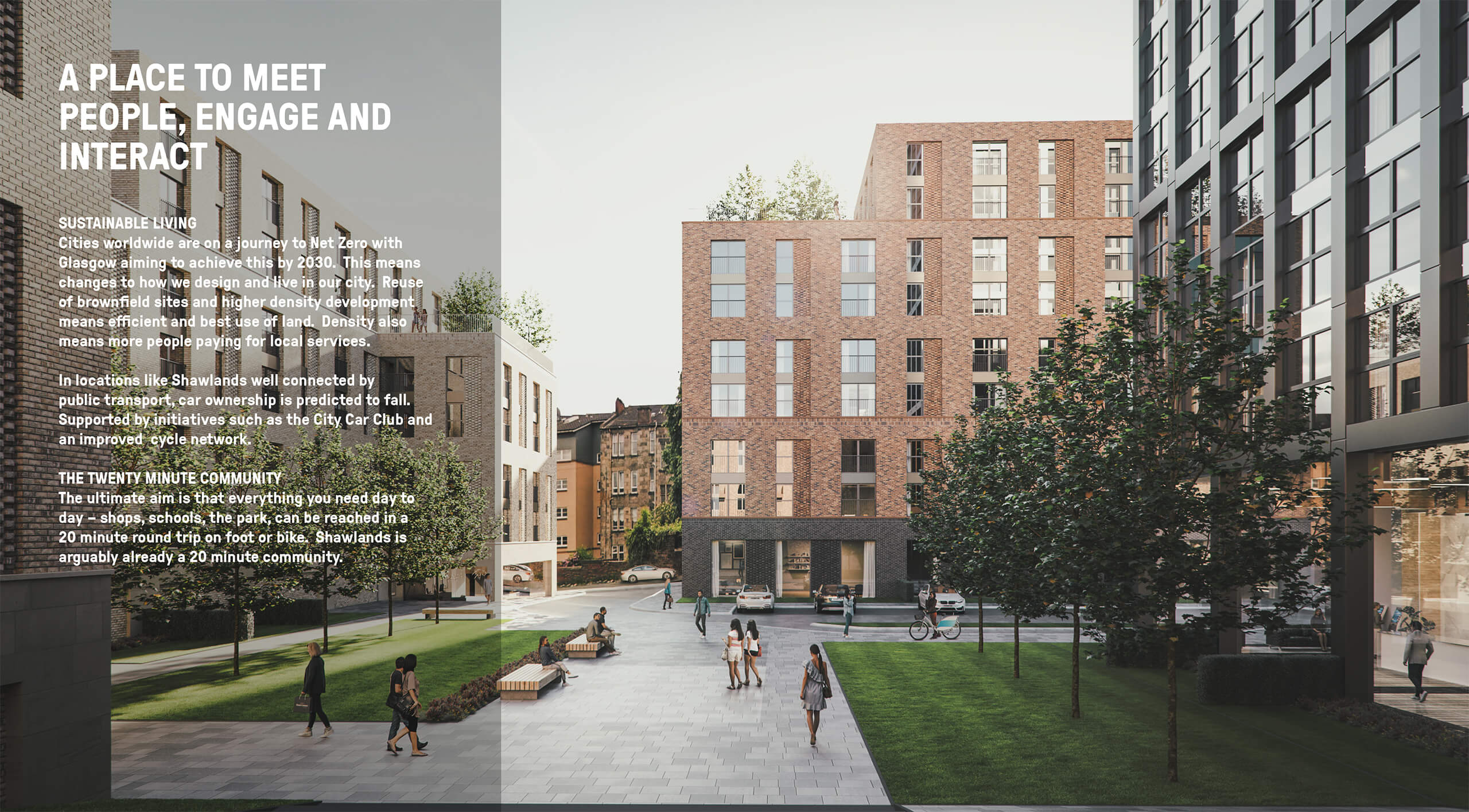 When questioned on what type of tenants they expected to attract – families, single, couples, they answered that they expect the development to consist predominantly of one and two bed apartments. There was no mention of social housing. Later in the presentation it was stated that they are seeking a long-term single landlord, and the viability of the development hinges on residential renting and the returns that can be generated. Without this, it would be difficult for the development to go ahead. This suggests that they have no intention in offering social housing, as it would not be profitable for them, and are looking to attract professional style tenants who will be able to afford high rents in order to generate maximum returns on investment. This will negatively contribute to the immediate surrounding locality, which will only have the effect of increasing rents, and pushing many low-income renters and families out of Shawlands, all hallmarks of the process of gentrification

Consultation with the community

The developers say that ‘300’ people registered for the public webinar on June 9th though it was not possible on the day to assess whether 300 people actually attended. The webinar did not facilitate a public discussion with developers where members of the public could openly discuss the development and hear each other’s concerns, queries, and suggestions. Instead, questions were selected and modified by the meetings moderator, which had the end effect of controlling the narrative of the webinar and avoiding any awkward questions that could have arisen. Conducting an online consultation is obviously rather limiting as it excludes a vast section of the community who might not have access to the internet from having their voice heard and expressing their concerns and opinions on the development. Despite limitations and restrictions on public gathering due to the Covid19 pandemic, there needs to be a better way to consult and enable meaningful conversations with local residents regarding this major change in their neighbourhood. There’s also concerns with the controlled manner in which the comment portal on the website was designed. The survey contains nothing but leading questions, with a narrow range of vague answers to choose from. Regardless of the outcome of the survey, it allows the development team to control the narrative of this section of the development consultation.

The developers are now reviewing comments received by residents and a follow up consultation is meant to take place in September before plans are submitted to the council.

The proposed development of Shawlands Arcade represents one of the biggest changes to the area in recent years.  It will dramatically alter the streetscape and skyline of Shawlands, it will remove vital shops from within walking distance of the local community, to be replaced by a soulless, nondescript residential complex inhabited by supposed “professionals”.  It will not, as the developers state, add a sense of vibrancy to Shawlands, but will instead serve to drive Shawlands, and the surrounding neighbourhoods, head first into the arms of gentrification. In the midst of a rent crisis, and a serious lack of homes suitable for families living in the Southside of Glasgow, the idea to develop 600 one and two bed apartments in a bid to extract high rents to maximise profits for investors, is an insult to the local community.  Shawlands needs more family orientated and social housing, not more luxury apartments.