Taking Harveys to the Cleaners 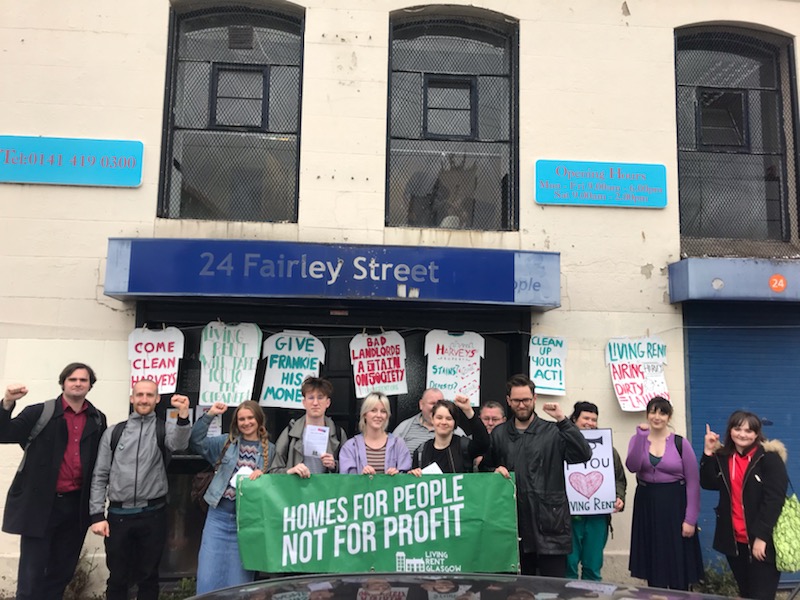 Living Rent member, Frankie, had a terrible time when he unknowingly moved into one of Glasgow’s most notorious letting agents’ flats last April. Frankie, a community development student at Glasgow uni, moved into a flat in Bridgeton, the east end of the city, let by Harveys Property.

When he saw the flat advertised on Gumtree, it wasn’t his first area of choice since it meant a lot of travelling to uni, but like so many other private renters he needed somewhere to move into fast. When he went to view the flat it seemed okay and there was no signs of problems in the shared close.

Frankie’s sense of security in finding a new home wasn’t to last long, when he was attacked in the shared close and had to go to hospital with concussion within the first week of moving in. Already feeling unsafe in the area and the flat which was meant to be his home, he returned back from hospital and noticed signs that people had been using heroin outside his door. Within a couple of weeks it also became clear that one of the flats in the building was a place where trafficked women were sexually abused by men, who would enter and exit the shared close at all times of the day and night.

When Frankie contacted Harveys Property, based in Govan, to let them know about the problems he was having they were unsympathetic and told him to contact the police. Frankie contacted the police but also wanted somewhere safe to live. When he asked Harveys to end the tenancy they refused and insisted Frankie stay to the end of the six month lease.

After a few months of back and forth asking Harveys to end his tenancy, Frankie contacted tenant’s union, Living Rent. Living Rent did some research and found that since the tenancy was created after the 1st of December 2017 it was a Private Residential Tenancy (PRT), with no end date. Although Harveys issued a six month lease, the Scottish Government legislation makes it clear that any tenancy created after this date automatically becomes a PRT, whether the correct tenancy agreement had been issued or not. They also found that his deposit was not protected in one of three deposit schemes in Scotland, breaching the Tenancy Deposit Scheme (Scotland) Regulations 2011. After numerous emails from Frankie and finally a letter from Living Rent, Harveys reluctantly ended the tenancy and returned Frankie’s full deposit. 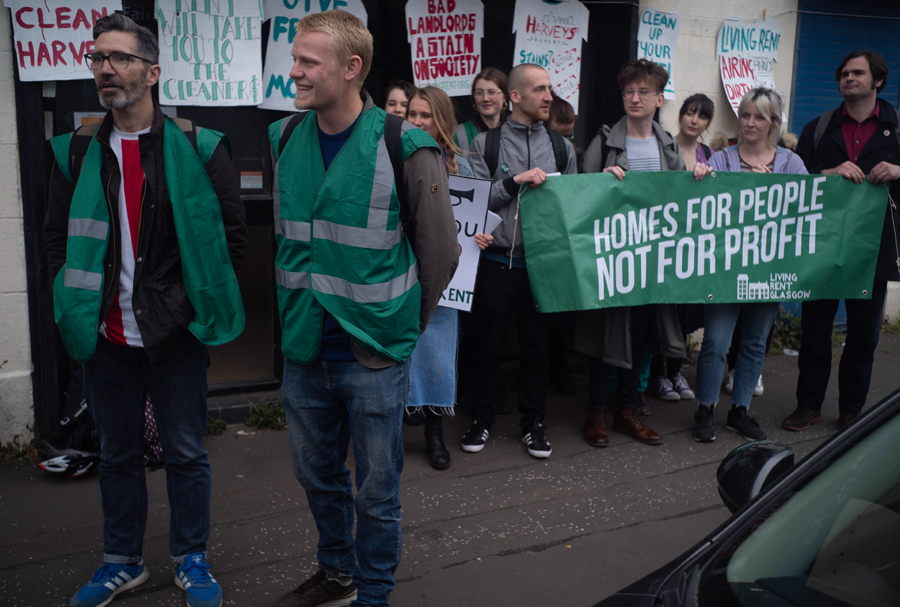 After having to live in a place where he felt unsafe for seven months, Frankie was finally able to move out and into another flat in a different area of the city where he felt safe. Knowing that his deposit had not been protected in one of three schemes, Frankie raised an application to the First Tier Tribunal (Housing and Property Chamber) within the allowed time scale - three months after the tenancy ended. He completed the long application process himself, appealing for compensation based on his unprotected deposit. When the case called in front of a panel in Glasgow Tribunals Centre, unsurprisingly, no one from Harveys attended the hearing. This meant good news for Frankie when he was awarded a total of three times the deposit he paid, £1287 in compensation. However, soon after this victory, Frankie became aware that the Tribunal doesn’t have the power to enforce payment and their only solution was for Frankie to raise a simple procedure in court, which he would have to pay to lodge.

Frankie got back in touch with his tenant’s union, Living Rent, and the member defence team in Glasgow started planning a way to get his payment. A group of five Living Rent members formed a negotiating team and turned up at Harveys door to demand payment within seven days. The staff at their Govan offices firstly said they were unaware of the Tribunal decision, which would have been sent recorded delivery, then miraculously they said they had received the decision but didn’t know where to make payment to. The team were able to hand them a letter with their demands and Frankie’s account details and they agreed to pay him the full amount.

Whilst the negotiations took place, a larger group of members picketed outside talking to local people about Harveys treatment of renters. In the back office, staff at Harveys must have phoned the police stating that Living Rent had broken entry. When three police vans turned up members explained that they had been let in by staff via the door entry system and that we had this on video. The police agreed that members were within their right to deliver the letter and protest peacefully outside.

Frankie received full payment, days after the teams negotiations and the unions picket, meaning not only has Frankie got some form of compensation for the hell he endured in a Harveys property, this also marks another victory for Living Rent members over one of many rogue letting agents in the city. Frankie states, ‘I think it’s been pivotal for Living Rent to be involved because I think that leverage, to have the power of the union is definitely what made them pay up. I know for a fact they would never have paid if it wasn’t for the union so Living Rent’s power has been massive in getting this payment made.’

Frankie’s case points out some important issues for private renters across Scotland, primarily that the First Tier Tribunal has no power to enforce the payments it orders, leaving private renters to take matters into their own hands. Several other Living Rent members are facing the same issues and the member defence team in Glasgow are planning more action just like this. If you would like to get involved or are facing similar issues to Frankie, contact [email protected].

Living Rent are here to protect tenants of both private and social landlords so if you haven’t already, join us!