On Saturday 9th June 2018, Living Rent Glasgow union members and local residents took part in a territorial inquiry around Partick and Whiteinch in Glasgow. Starting at Partick Housing Association’s (PHA) headquarters, we went on to critique some of PHA’s new-build developments, visited the sites of historic working-class battles, including the 1915 rent strikes, learned about monopoly land and property ownership at the new Glasgow Harbour development, as well as finding out about the off-shore tax havens where the multimillion pound profits from the new student housing developments in the area end up. 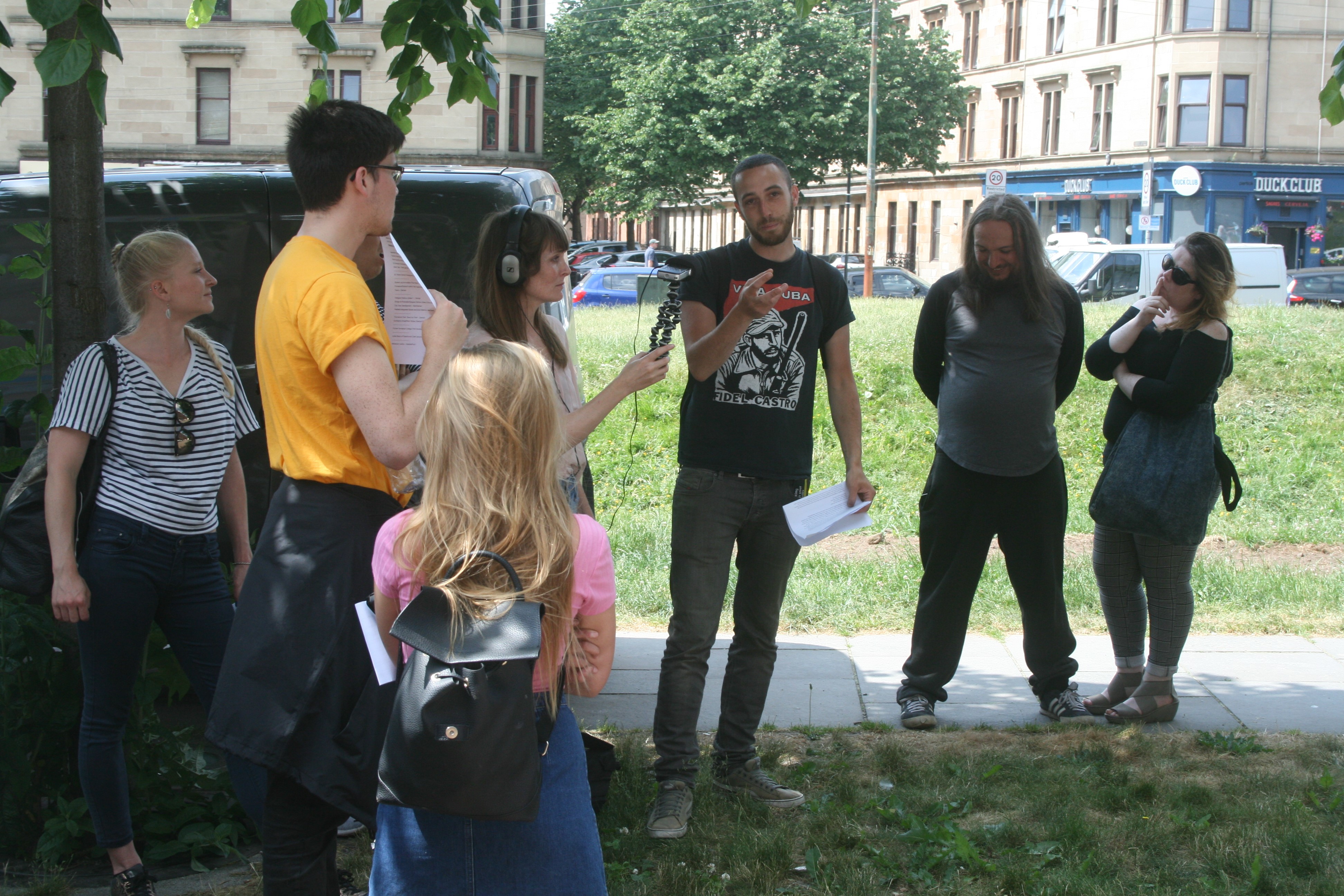 Above: Opposite Partick Housing Association’s headquarters, in Mansfield Park, Glasgow

You said, we did…

Throughout modern history, the working class have been made the subject of the worst type of sociological studies, from late-nineteenth century pseudo-scientific ideas about eugenics, to early-twentieth century stereotyping of a so-called ‘underclass’, the new ‘undeserving poor’. Nowadays, most government agencies make a big noise about ‘public consultations’, housing associations claim to be built around ‘tenant participation’, and Local Authorities have online ‘consultation hubs’ or ‘citizen spaces’ where we are urged to give our opinions.  Similarly, before they ‘invest’ in your area, public and private housing developers will commission extensive market research studies, looking at land and property values, footfall, ‘desirability’, etc, as well as carrying out phone polls, door-to-door interviews and vox-pops so they can put quotes in their glossy brochures. This is supposed to give the impression that the working class are not only being studied, but also listened to. In actual fact, public and private landlords are simply using sociological methods to find ways to incorporate tenants and raise rents, becoming more profitable through cutting corners and services. However, not all sociology is in the service of capital, and not all inquiries are carried out by officials in order to be fed back to corporations and governments. Living Rent wanted to organise a way of bringing together people with an interest not only in the past and present of the area but with a desire to start organising politically there. Of course, we followed in the footsteps of Marx…

A collective politics of urban space

In 1880, Marx drafted a questionnaire for a ‘workers’ inquiry’, stating that:

[the workers] alone can describe with full knowledge the misfortunes from which they suffer and […] only they, and not saviors sent by providence, can energetically apply the healing remedies for the social ills which they are prey.

But it wasn’t until 1960s Italy that a real workers’ inquiry came into being, used by the radical left-wing groups Potere Operaio (Workers’ Power), Autonomia Operaio (Workers’ Autonomy) and Lotta Continua (Continuous Struggle). These groups wanted to use inquiry not just as a research tool but as a way of organising. They didn’t want to preach a political doctrine to a group of workers but instead, as workers and activists, to find out what the actual concerns and positions of workers might be and how they could be used in the working class struggle. Class resistance is often understood in terms of workplace resistance, failing to recognise or understand the role of reproductive labour, and therefore the struggles of women and others outside the factory. Territorial inquiry introduces the ‘the application of inquiry methods in specifically spatial settings as an investigative basis for a collective politics of urban space.’

The Territorial Inquiry, Partick (a taster)

The walk lasted over four hours, and we will shortly be starting a blog to report back in detail about research carried out during the inquiry. Many of the points raised will also be used to help us organise in the future.

Joey talked about the rent strikes in Partick in 1915. He told us that working class housewives, who pioneered a range of creative tactics, led the struggle from the front. In Partick, tenants signed a “round robin” letter refusing proposed rent increases. When sheriff’s officers or factors approached tenement closes, a fishmonger’s bell was rung to warn against the approach of the enemy. In November 1915, as the rent strikes escalated and one factor issued warrants of eviction against eighteen local tenants, the Glasgow Women’s Housing Association called a massive demonstration on the 13th. Helen Crawfurd spoke from a platform on Thornwood Hill to protesters from Partick, Whiteinch and Scotstoun, stating that the strikers asked not for charity but for justice. Four days later, a demonstration was called outside the court in support of the Partick rent strikers, with workers from many shipyards coming out in solidarity with the women. Frightened that the War effort would be affected, the government rushed through the Rent Restrictions Act, introducing controls on rents to pre-war levels well into the 20th century.

Joey talked about how Living Rent union members today are still fighting against rent rises in Partick, and across Scotland generally, this time imposed by both the public landlords that the rent strikers helped create as well as the same old private ones. Like tenants in Partick in the early 1900s, who used a range of direct action tactics, including humiliation of factors’ clerks and the throwing flour and peasmeal at the factors’ lieutenants, Living Rent members often fight evictions, illegal landlord fees and poor quality housing using a range of direct action tactics as well as more legalistic approaches. 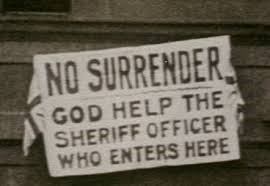 Will did some really good research around the massive student housing developments all along Beith Street. The tiny rooms are rented out at up to £700pcm under the guise of ‘luxury accommodation’, which has an inflationary impact on local housing and student accommodation across the city. Moreover, an architecture student and Living Rent member, Alexandra, pointed out that the windows in the blocks were the minimum 1m square allowed by planning standards--a sure-fire sign of a cheap-build and anything but ‘luxury’. Will discovered that the landlords are registered off-shore, meaning the massive profits from the developments are totally tax-free. We considered the difficulties of organising around an ever-changing student population, many of whom are only here for a year or two. At the same time, students housed together in this way provide a potential to organise on a mass scale, much like the victorious UCL Cut the Rent rent-strikers did. 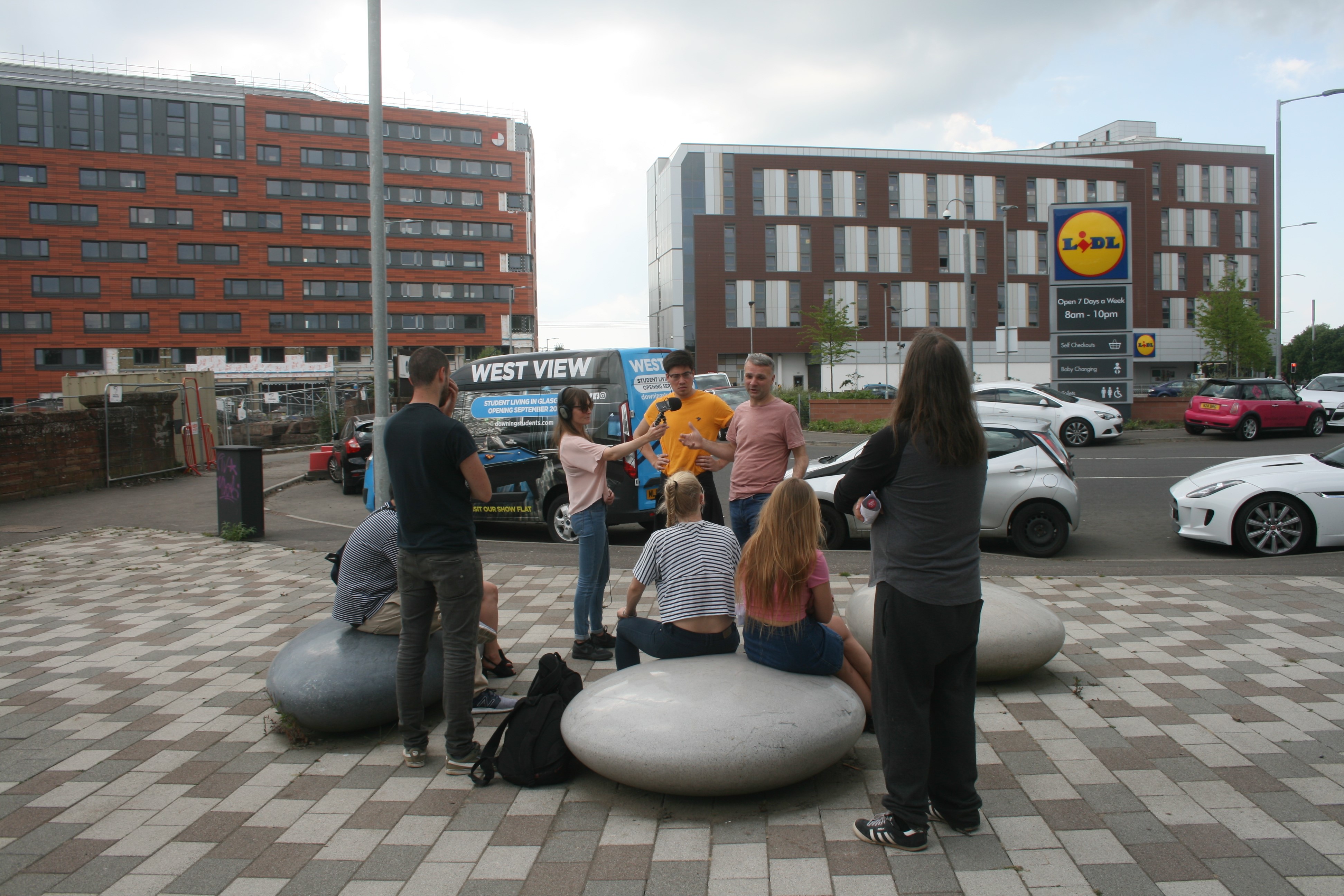 Talking about the student housing developments on Beith Street

Neil talked about land ownership at the so-called Glasgow Harbour (we echo the writer Kirsteen Paton’s question regarding why it’s not called ‘Partick Harbour’). He told us that most of the land along the Clyde at that point is owned by Peel Holdings, ‘the biggest company you’ve never heard of,’ according to the Independent. It was interesting to hear about the massive amounts of public subsidy through capital grants, land-remediation funding and pump-priming through infrastructure, including bridges, roads and services, whilst standing in what essentially feels like a weird island of artificial development surrounded by derelict land. There is definitely scope for organising around how public money is used in these developments. Bex talked about the move towards more Scottish Government funding for mid-market rent properties, which are let by a subsidiary of PHA at more than double the PHA rent. Such properties will make up 25% of new builds over the next 5 years of the council’s Strategic Housing Investment Plan 2018/19–2022/23. 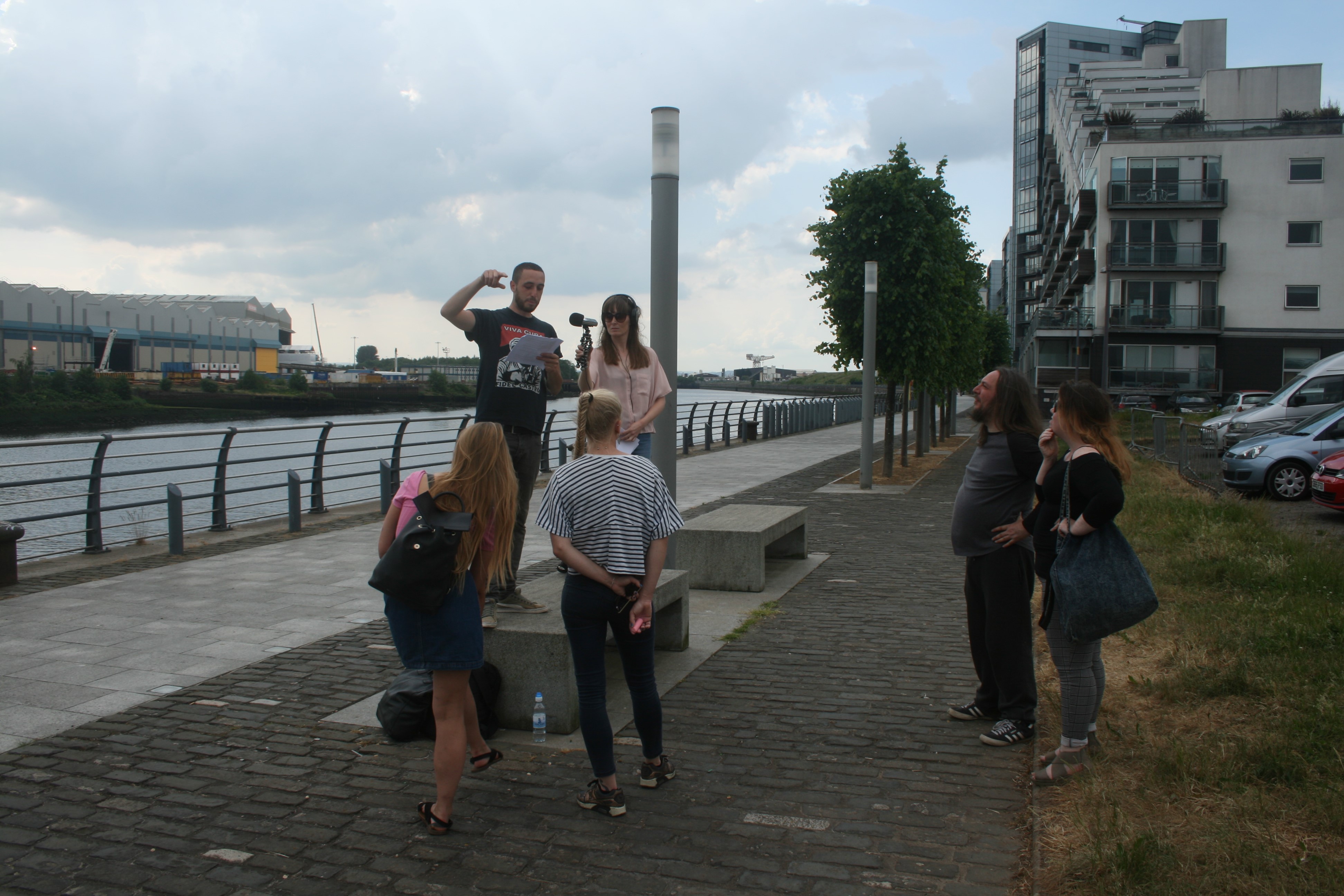 Damien spoke about PHA’s St Peter’s development in Partick. This will create 60 units of mixed tenure. It was impossible to find out what these tenures will be, despite the fact that construction is well under way. This was also the case for the other new PHA development on Laurel Street. Damien spoke about how many of the streets in the area were high on the Index of Multiple Deprivation but that the area is perceived to be very middle-class, a conception pushed by developers wishing to push rents up higher still. Many working class residents cannot afford to live in the area when they move out of the family home. This is a form of social cleansing, and is a subject that the LR is keen to continue to organise around, in solidarity with local tenants as well as those all over the country. 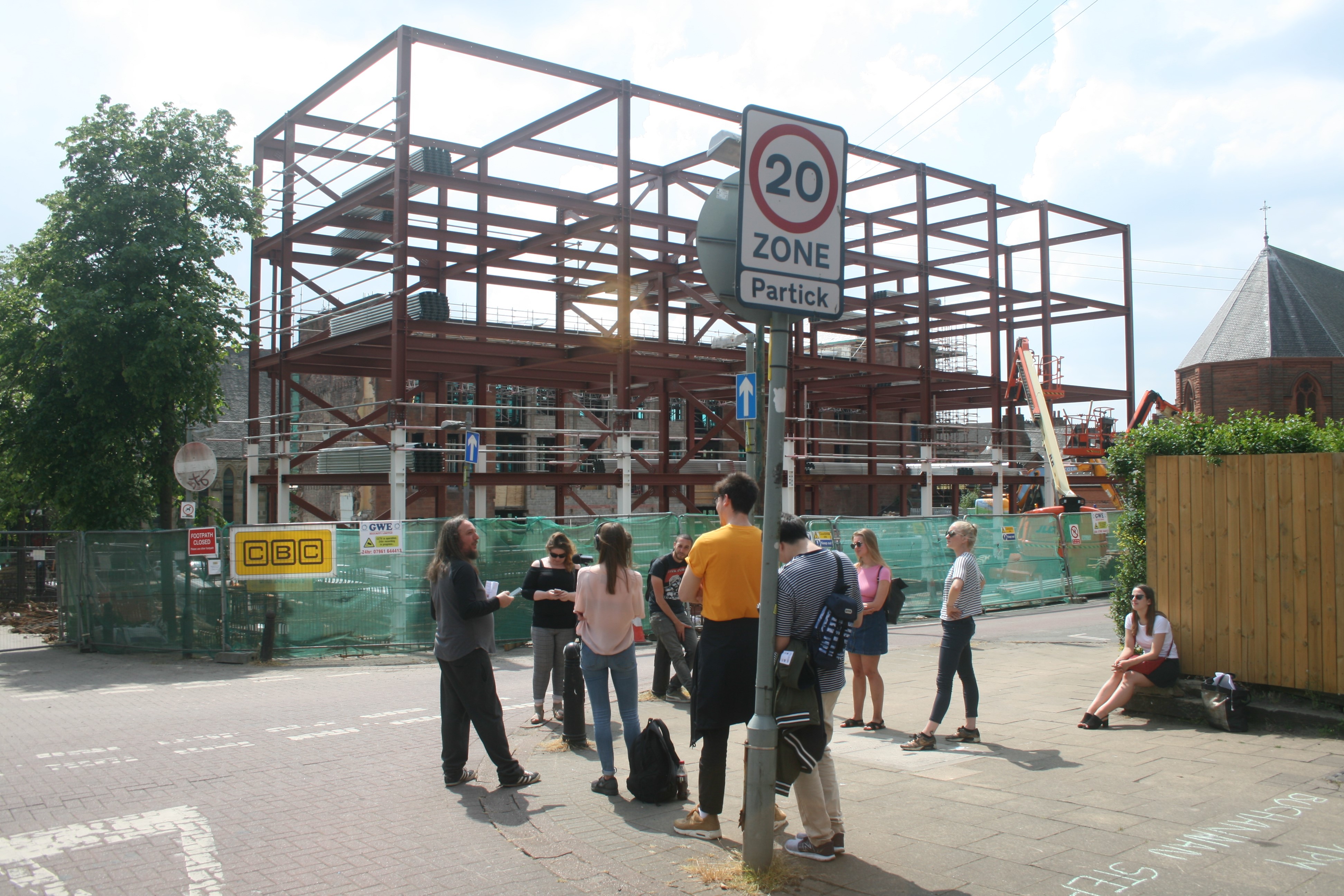 St Peter’s School site, from the corner of White Street and Dowanhill Street, Partick. This is a Partick Housing Association development, including ‘a mix of properties for mid-market and social rent’.

The Neighbourhood is the New Factory

So it doesn’t matter if you don’t work in a factory or an auto plant, or even if there’s no union in your office  or school or workplace—if you’re a tenant, join the Living Rent tenants’ union and let’s organise around better, cheaper housing for public and private tenants.

If you are interested in organising further inquiry or action in Partick, or in your local neighbourhood, get in touch!

Short summaries of workers’ enquiries and their origins

Emery, Ed. (1995). No Politics without Inquiry! Available at Notes from Below. Link

Mason-Deese, Liz. (2012). The Neighbourhood is the New Factory. Viewpoint. Link