Throughout the past few weeks and months our members and organisers have seen first hand the devastating impact Universal Credit (UC) is having in Glasgow. Whether it be through our work with community advocacy groups such as Law Centres and the fantastic WestGAP or through our daily conversations on the doorstep of Glasgow’s housing estates, we are forced to contend with the question of what can be done about UC. We've heard about sanctions that can last 3 years because your clothes are dirty and about cleaners who face eviction due to rent arrears buildup from the migration to UC. There is a lack of working tax credits to supplement exploitative zero hour contracts and all the while we have shameful levels of food bank use that would be condemned as the mark of a failed state in some parts of the world.

So what can be done about it? Is it too big and too powerful to fight? Have the Tories and the DWP learned and adapted from failed welfare reform in the past? Given that UC uniquely affects housing, supporters and members of Living Rent routinely ask what we can do. Learning from our experience in the communities around Glasgow and following from the wonderful event hosted by Women Against Capitalism on Saturday 31st of March, we hope to lay out a template around how a campaign against Universal Credit could be fought and at least partially won.

Working from a strategy chart template adapted from the Midwest Academy, we will attempt to break each section down using the information supplied at the workshop held on Saturday the 31st of March. 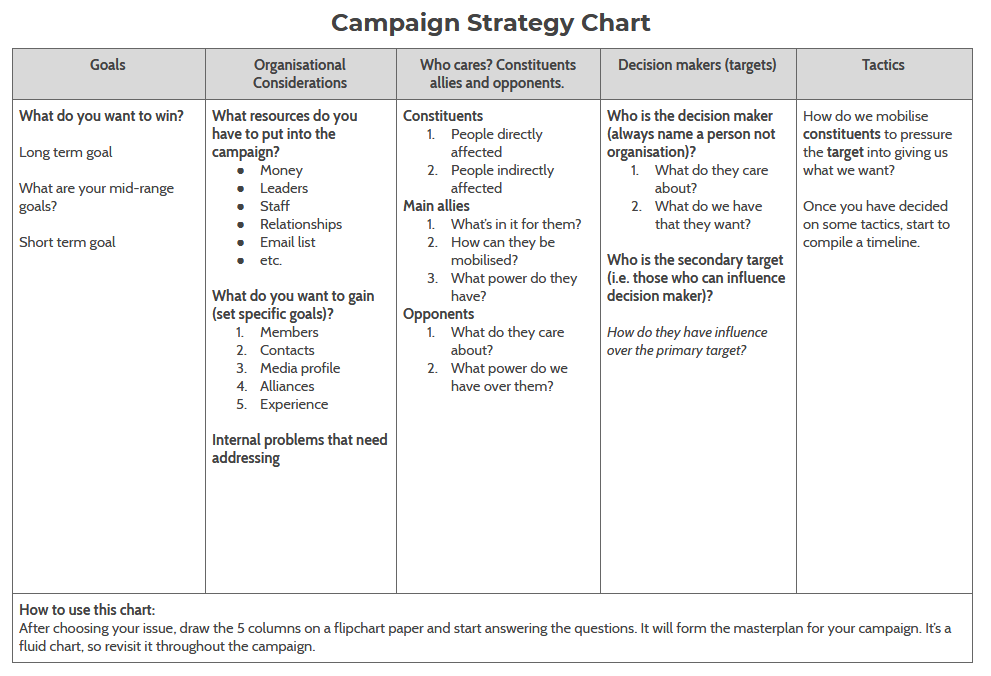 Goals - What do we want to win?

2) No evictions due to Rent Arrears from Universal Credit.

Above is some of the examples given in the recent workshop, the same exercise could be used to break down the short term goals further, giving agency and concrete winnable demands to any community or neighbourhood group looking to have an impact where they are or to play an important part of a wider national campaign.

The importance of breaking down any campaign is essential in this regard, focusing on the small stuff gives volunteers and organisations the ability to build and grow their experience and capacity to fight the bigger battles, whilst giving much needed sense of achievement and increasing momentum to keep going forward.

Organisational Considerations - What resources do we have?

2 Examples given at the same workshop included anger and unity under Universal Credit. Despite what many will say anger is a valuable resource that should be channelled and utilised—apathy and compliance won’t call people to action.

Perhaps more importantly in this instance is the fact that everyone looking for Social Security will now most likely be on Universal Credit. In the past claimants may have been divided up between Job Seekers, Personal Independence Payments, Working Tax credits or simply needing a little bit of help keeping the roof over your head. Everyone now is forced to claim on the same programme, after centuries of dividing rule have they left us with a single life line to unite around?

Other resources that could be listed here if a union, community organisation or political party could include:

What do you want to gain?

This could be what your individual organisation looks to achieve in terms of capacity or it could be as wide as building a campaign coalition or as small as looking at how individual volunteers or members could develop their experience through campaigning.

Campaigners at the recent workshop listed the following as immediate gains they would like to achieve and develop:

Who cares? - Mapping Support and Opposition

This section can be expanded into 5 main columns and explored in greater detail below is some examples of questions to ask ourselves when picking our allies and opponents.

Note that some organisations who may at first seem like opponents could be potential allies. 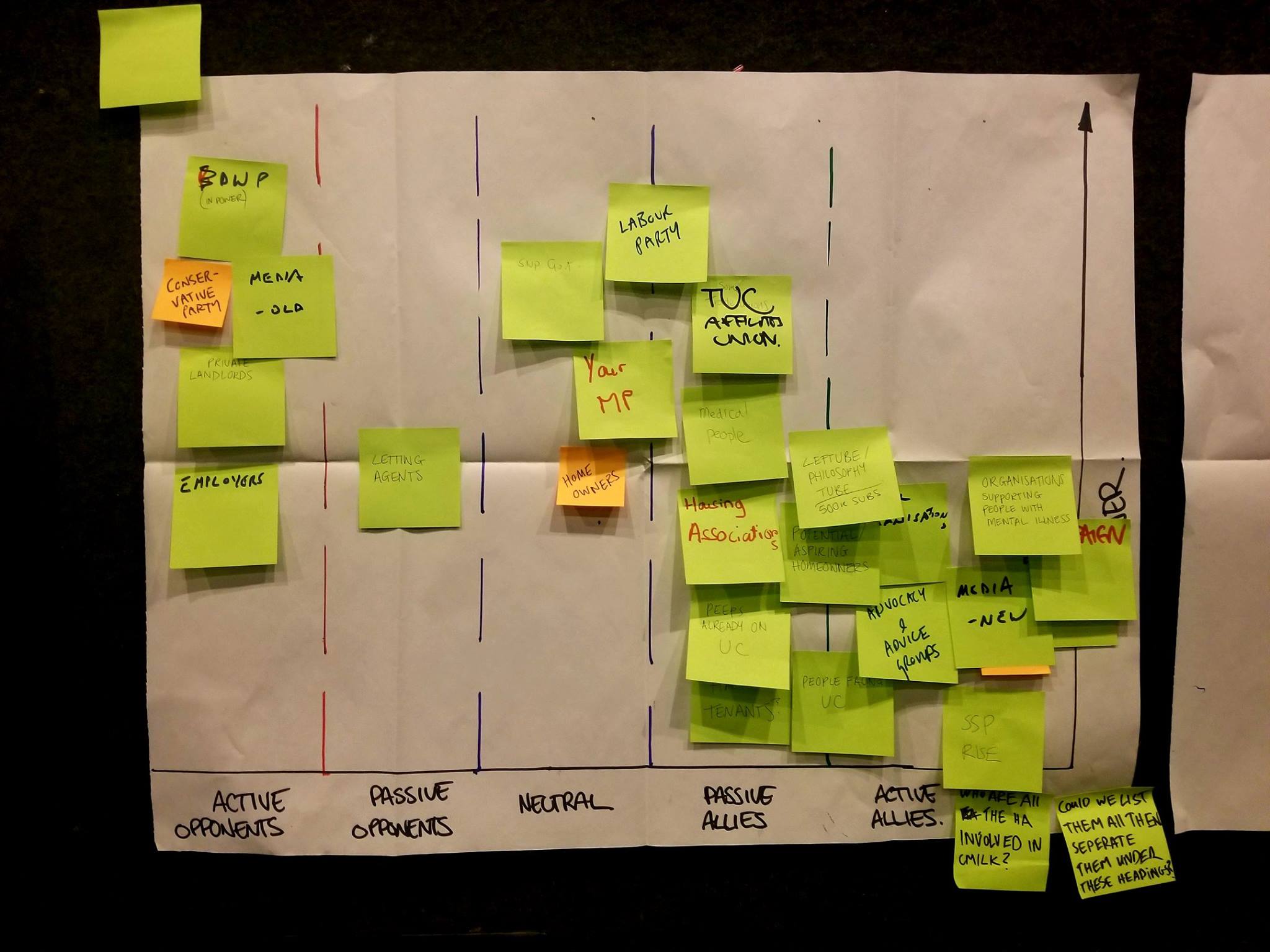 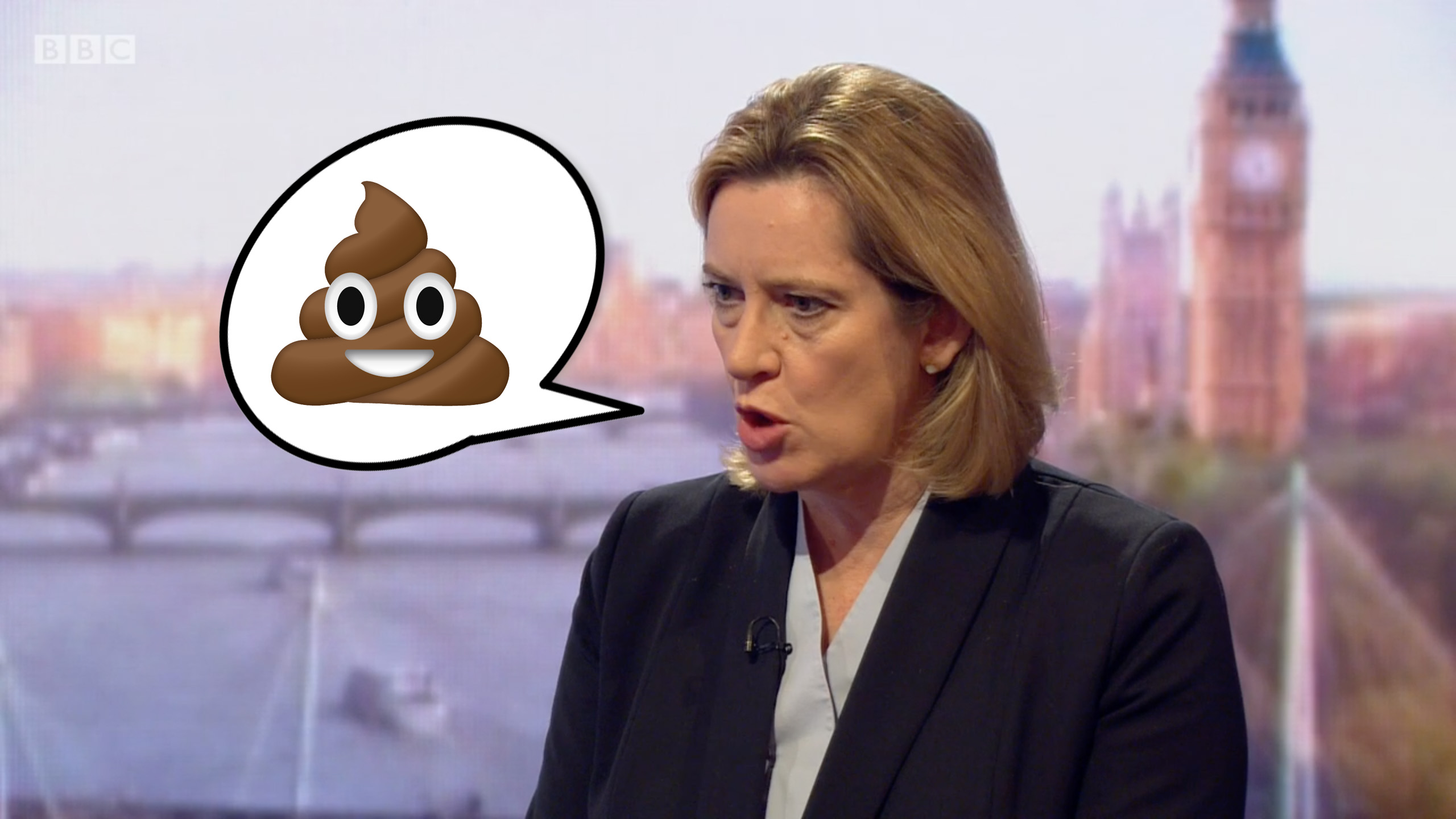 Peter Schofield, Permanent Secretary for the DWP and not to be confused with Philip Schofield Daytime TV presenter and apparent naked gardener 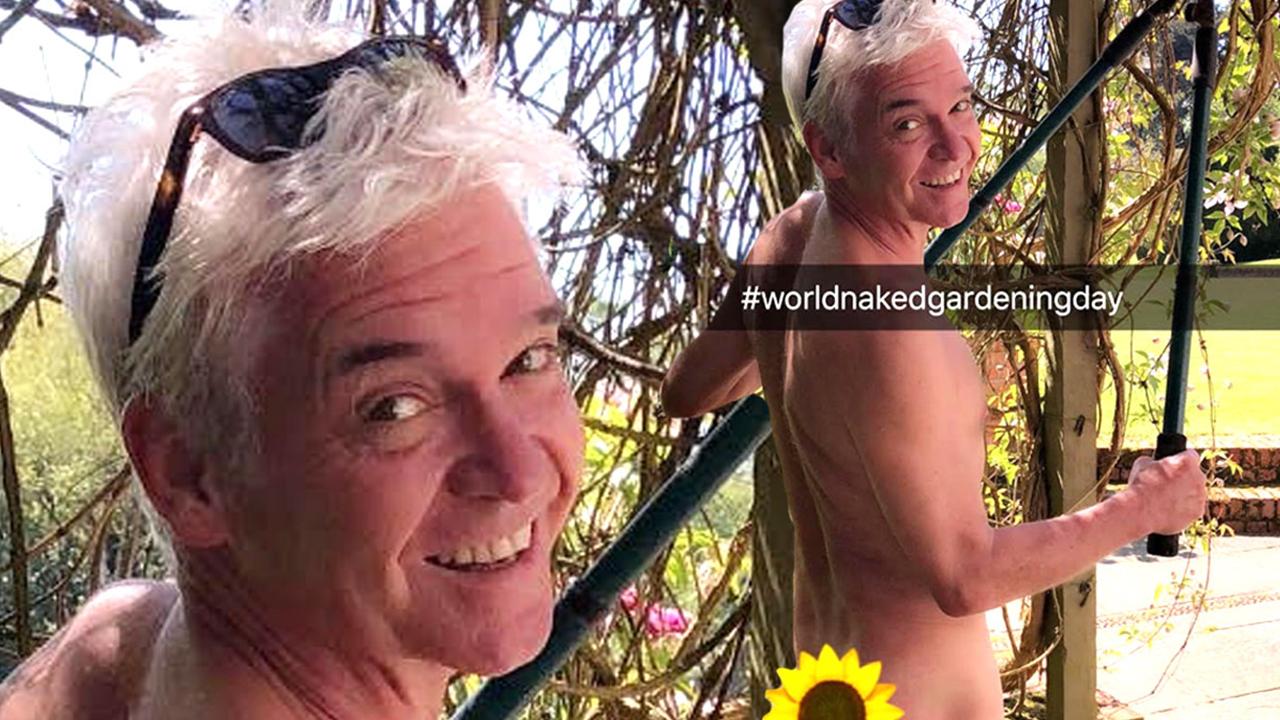 Not excluding viewers of This Morning and Dancing on Ice, who has the power to influence and apply serious pressure to Amber Rudd and Peter Schofield, and how to we apply pressure to them?

Try to think outside the box on this one, voters in Rudd’s constituency can apply pressure at election time, and Unionised workers could apply pressure within in the workplace but who else has the power to give us what we want?

This is when we can highlight the importance of breaking the big issue’s down let’s look at our short term goals:

2) No evictions due to Rent Arrears from Universal Credit.

Do we currently have the power to influence Rudd or Schofield on our first demand? If not can we win the second looking at more localised decision makers such as Landlord and Housing Association bodies, bringing them onboard as allies building our power to go back and win our first demand?

Once we have picked our targets we can get begin to look at the best tactics to raise awareness of the issue and apply pressure to our decision makers. It may be as simple as writing and hand delivering a letter to bigger and more engaging actions such as mass demonstrations.

It is important to always ensure actions are fun and accessible to be part of. 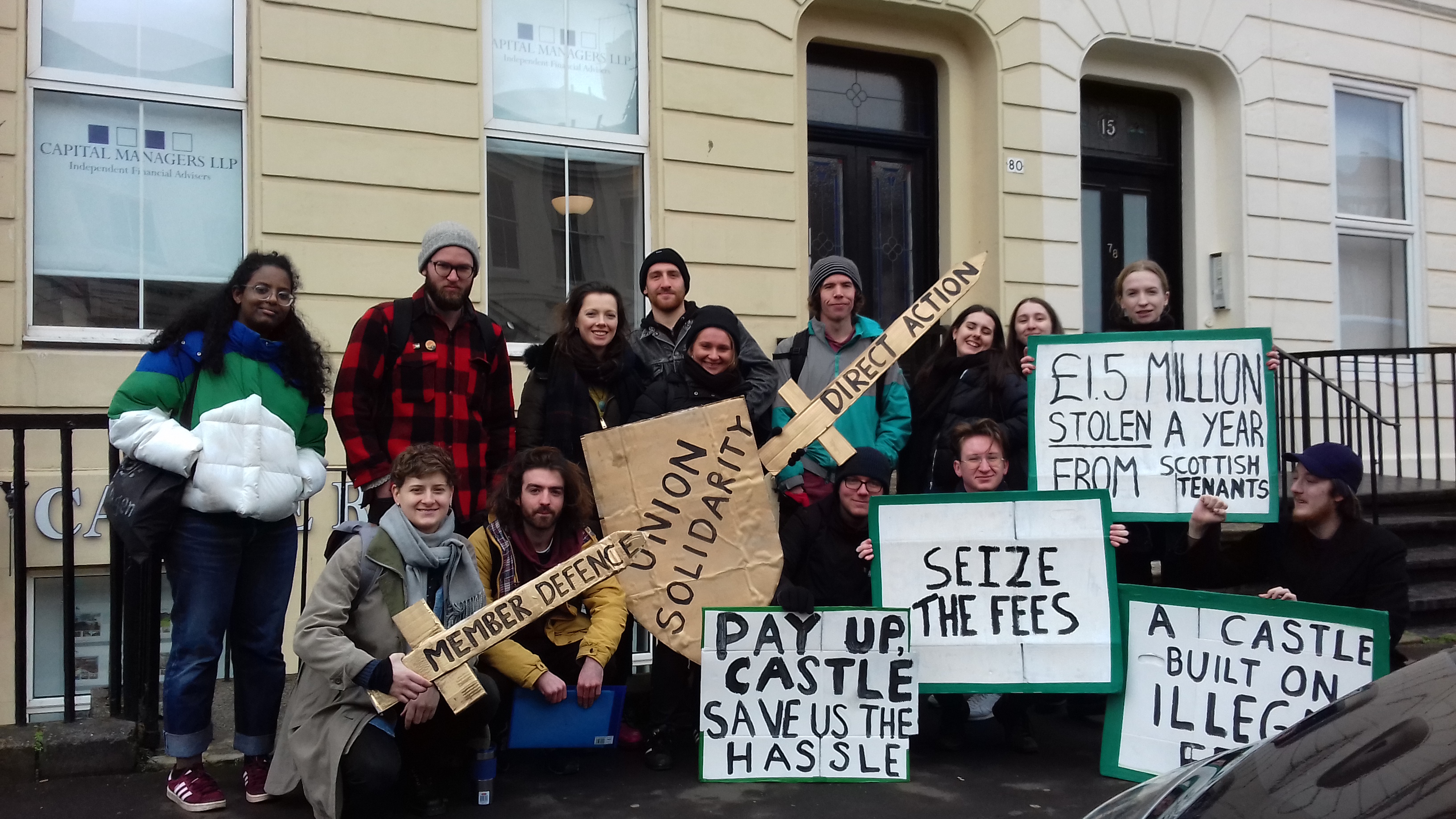 This is far from comprehensive and Living Rent will continue to work with organisations who share our values and goals to tackle the issues that face us, big and small. We look to further the conversation around Universal Credit and how to fight it, but first we need to fight what we can where we can, whilst building up the capacity and experience of our union and our members.

We need to properly map out all our potential allies, identify concrete local demands, and build infrastructure. Along with a step by step plan of how members and supporters can get involved, people need to feel they have agency in a campaign that can easily seem exhausting and overwhelming. While daunting however, we hope we have provided a glimpse of what can be achieved with a little bit of organisation and direct action. If you would like to get involved in any of our campaigns or help build a branch of Living Rent where you are, don’t delay and join today!