Victory in Shawlands for Cally & Gary! 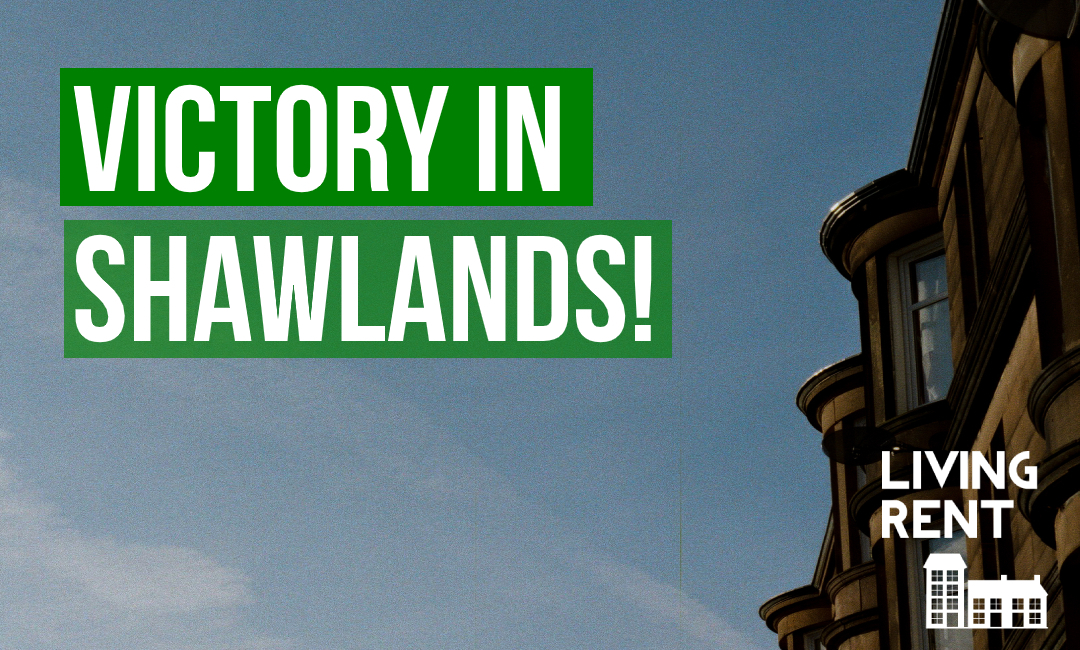 Like many, Shawlands residents Cally and Gary were hit hard by the global pandemic. They suffered a loss of income and had to sign on to Universal Credit, which wasn’t enough to cover their rent. They managed to negotiate a rent holiday with their landlord but within a few months the landlord began requesting full rent again. The landlord also demanded arrears be paid back, threatening to evict them if they did not pay up. Feeling frustrated and defenseless, they got in touch with Living Rent and joined as members.

The Shawlands member defense team supported Cally and Gary in applying for Discretionary Housing Payment - a DHP. A DHP is provided by the council when the tenant needs additional income to meet their housing costs. Thankfully, the application was successful, meaning we were then in a position to offer the landlord full rent and half of the arrears. Unfortunately, this wasn’t good enough and the landlord still wanted more of the arrears paid back!

Throughout the pandemic, the government has asked tenants and landlords to “work together” to achieve what’s best for both parties. Cally and Gary were very willing to work with the landlord and letting agency, but there has been no evidence of them attempting to reciprocate. It’s clear that despite what the government wants us to believe, we simply cannot rely on the goodwill of landlords or letting agencies.

The landlord told Cally and Gary to ‘get a job’. The letting agency backed the landlord and suggested that Cally should use her student loan to pay rent. They even pushed for a voluntary eviction by offering to move them to cheaper accommodation. None of these suggestions were useful or viable for the couple and they felt that they were not being listened to.

It was clear we needed action. We began getting ready to march on the landlord, and asked the council to hold off on the DHP payment until we negotiated with the landlord to write off the arrears. At that point, the council made an unexpected move and agreed to pay back all arrears in order for Cally and Gary to stay in their property!

We are so happy that Cally and Gary are able to stay put in their home, but the landlord was still able to reap all the money they wanted while causing inordinate distress for Cally and Gary. Now that the stress and fear of eviction is over, we are moving to get repairs done which are long overdue, and Cally and Gary are ready and able to help us chase other dodgy landlords.

Cally says, ‘without Living Rent we wouldn’t have anywhere to live, we can’t thank them enough for all the support they’ve given us. Living Rent was recommended to us by a friend and they have supported us every step of the way from communication, to resisting eviction to planning direct action.’The lessons we can learn from Cally and Gary’s case;

Landlords are used to getting what they want, but if we stand up to them, they almost always back down. The Shawlands branch of Living Rent are working hard to build our membership so that we can be as effective and powerful as possible in our fight for tenants’ rights.