In the same week as the the court case against Serco, Living Rent joined forces with MORE (Migrants Organising for Rights and Empowerment) and The Unity Centre to launch an organising team against evictions, concentrated on housing in the immigration system.

The launch event took place on Saturday 9th February at Glasgow Autonomous Space. It culminated in a rally to build tenant and community power and encourage new members to join the organising team. Speakers with experience of the immigration system explained their determination to build capacity within their communities and bring about transformation in housing. We also heard from representatives working in refugee and asylum accommodation support as well as experienced Living Rent organisers, who all spoke about the importance of neighbourhood struggle and coalition building to overcome oppression and privatisation in the sector.

In the wake of the outrage following Serco’s threats to evict asylum seekers and refugees last year, our union has spent several months establishing networks in the city. We set up regular street stalls in neighbourhoods, knocked on doors to raise awareness of the campaign and began organising with Unity Centre and MORE. As a result February’s ‘No Evictions’ launch offered an important social opportunity for those we met along the way to keep in contact with our organising team. It made for a lively and packed event with over one hundred individuals from resident associations, migrant-led organisations, activists and their families came together to eat, play and discuss radical alternatives to the current system.

But this wasn't just an exercise in solidarity. We set out to establish an organising team and it is now growing in numbers and diversity. Those that attended represented the groups who have been left frustrated at poor standards and rights regulation in housing and they want to do something about it. The members involved now plot a course to build trust amongst those affected by the hostile environment policy and to put plans in place to reverse the trend of evictions and poor treatment. This can be done by, ensuring communities organise for themselves, stating clear demands for change and building a base of supporters ready to take action if those demands are not met.

Serco have suffered heavy defeats in their attempts to push their agenda, many of you will have played a role in keeping them from profiteering at the expense of their tenants for the meantime. Unfortunately we cannot be sure of the outcome of the court case  just yet and their response which is due later this month. Besides all this Serco continue to move their tenants on and support services alone cannot cope. So we are calling on our members and supporters to be organised and support the citywide organising team, there is still time to get involved. Be ready to fight to ensure people’s renting rights are upheld.

Our tenants’ union can only continue to organise against evictions and empower renters in the city through the support of our membership. Join the union today. Build our strength, protect your rights and those of your neighbours. https://www.livingrent.org/join 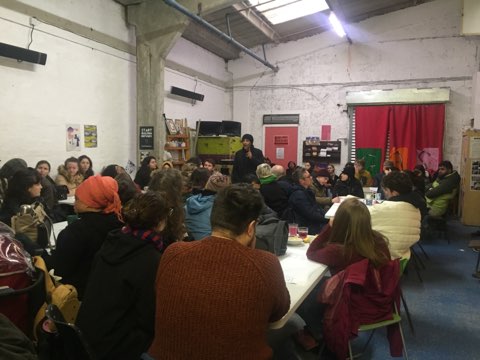 The launch event declared an opposition to all forms of eviction, recognising that the situation in Glasgow is at a tipping point. The focus of this alliance, for now is on Serco; the international services provider contracted by the Home Office to manage Asylum Seeker accommodation in Glasgow until September 2019. Representing the Unity Centre at Saturday’s launch Sanna Saidy, spoke to the crowd and gave an account of trying to keep hope throughout his  experiences in the immigration system and finding a role in activism to confront the border regime in recent years, He remembers seeing Serco staff’s hostility when confronted by last summer's protesters; as well as the arrogance of the company’s legal team who he witnessed making statements at their recent battle in the court of sessions. The court case of last week demonstrated just how the management of this private company masquerade as a voice of public authority, prepared to terminate a tenant’s occupancy without that person's right to appeal being recognised. The struggle against this situation, has repercussions for renters from migrant and non-migrant backgrounds as it opens up the debate on who has legal right to occupancy and how housing providers justify the ‘proportionality’ of evictions. Importantly it draws parallels between all those not able to seek an independent tribunal when facing eviction because of a range of issues including such as inadequate welfare support.

At the event Living Rent member George Lavery sketched out the importance of our Union in organising in neighbourhoods and empowering tenants overall. He struck at the heart of this campaign when he explained through the victories of the past how a mass movement of renters can mobilise to win against the rentier class and forces of capital. Many of the attendees were new to the process of neighbourhood drives and spoke to volunteers afterwards about getting involved in these future actions. We will be taking these drives to the streets in coming weeks and you should be there too.

All the speakers, celebrated the persistence of the movement in Glasgow and the success it achieved in stopping this multi-million pound enterprise in carrying out  its proposed policy of mass evictions last year. Shafiq Mohammed echoed this statement as he spoke to open the event, however he also warned caution. We must be prepared to make a real anti-evictions campaign work, and to hold the Mears Group to account when they takeover the contract from Serco later this year. Shafiq explained emphasised that it could be a tricky transition period as Asylum Seekers now number more than 5000 in Glasgow, the highest population numbers in 12 years. He explained that with numbers of people this high and a system not currently sufficient to support everyone, there is an increased likelihood for tenants to find their voices lost in the process and additionally poor practise and underhand tactics may be employed by accomodation management during the changeover.

Finally Yvonne Blake summarised why this campaign forces us to reconsider our commitment to Human Rights and why it is important for Living Rent to work collaboratively with MORE:

“to strengthen our campaign through skills share and capacity building to continue campaigning for Asylum Seekers right to work, study, and to be treated with dignity and access to decent housing.

For example, asylum seekers are classified as international students eligible in higher education to to pay upwards of £16,000 a year! Forbidden from engaging in paid employment and are forced to live on £40.00 per week. Considering the fact we don't have power to turn water into wine ...this policy deliberately impedes our mental, intellectual and social development which is paramount to our integration, and it contravenes our basic Human Rights to develop, nurture and provide for our family in safe and secure environment"

Find out more information about the coalition against evictions and the hostile environment in the immigration system, Check out the fantastic work being done by MORE and The Unity Centre in Glasgow : 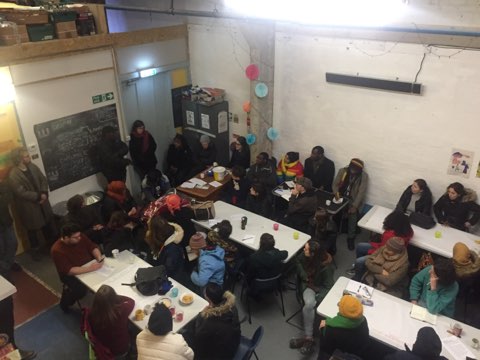