Seize the Fees: Storm the Castle 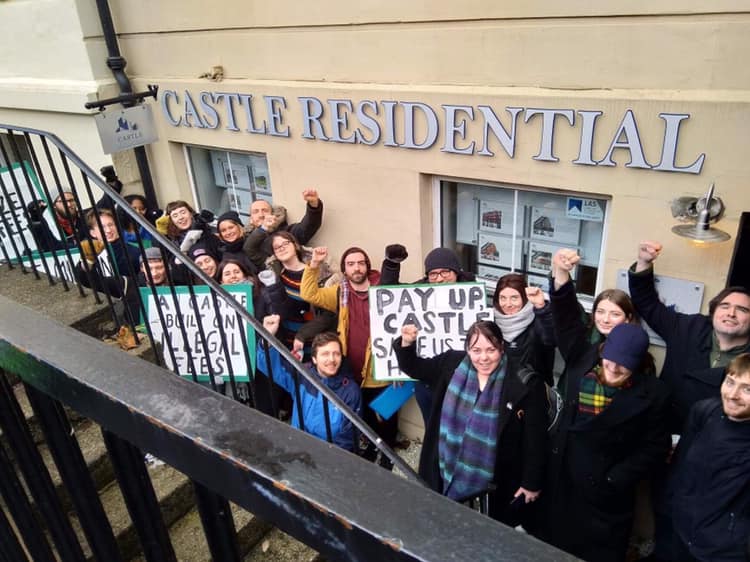 Living Rent has been conducting a campaign against letting agencies charging illegal premiums in Glasgow since the launch of our branch in 2016. One of our first victories on this front was against Infiniti Properties back in January 2018, when union members rallied together on their doorstep to ensure the repayment of over £400 in illegal fees charged to our member, Hugh. This victory, like many before, proved the effectiveness of direct action in the face of letting agencies’ intransigence to tenant queries. From here on, the issue of illegal fees has been at the forefront of Living Rent Glasgow’s drive against abusive practices of letting agencies.

Our successful campaign has led us to the point we are at now – up against notorious Castle Residential, who refuse to pay our members back the illegal fees charged to them. Due to their persistent lack of cooperation and refusal to meet with their tenants and Living Rent, we feel it is about time to shed light on their unlawful behaviour and their unacceptable treatment of tenants.

All fees are illegal!

In April 2018, we started to compile evidence to illustrate the scale of the problem, which found that around £1.6 million in unlawful fees could be being charged in Glasgow each year. In response, we launched the Seize the Fees (STF) campaign in May by paying a visit to landlords and letting agents from across Scotland at a gala day hosted by the Scottish Association of Landlords (SAL). By showing up at this event, we forced those high up in the housing business to listen to the plight of their tenants and draw attention to the SAL members who systematically charge illegal fees, despite operating under SAL’s so-called accreditation:

‘’We do not charge any fees to register with our agency. Only once you have found a suitable property and an application for tenancy is made, a credit and reference check is required (per adult looking to reside in the property and for any guarantor checks carried out).’’ (Castle’s website)

Since its launch in May, the Seize the Fees campaign has gained major traction, bringing forward many of our members with cases of fees they were previously unaware were illegal. From our research, a pattern started to emerge, showing up Castle Residential to be the worst offenders of charging illegal fees in the city. This did not come as a big surprise to Living Rent, having dealt with this rogue letting agency before, regarding the appalling conditions their tenants had to suffer in their properties. 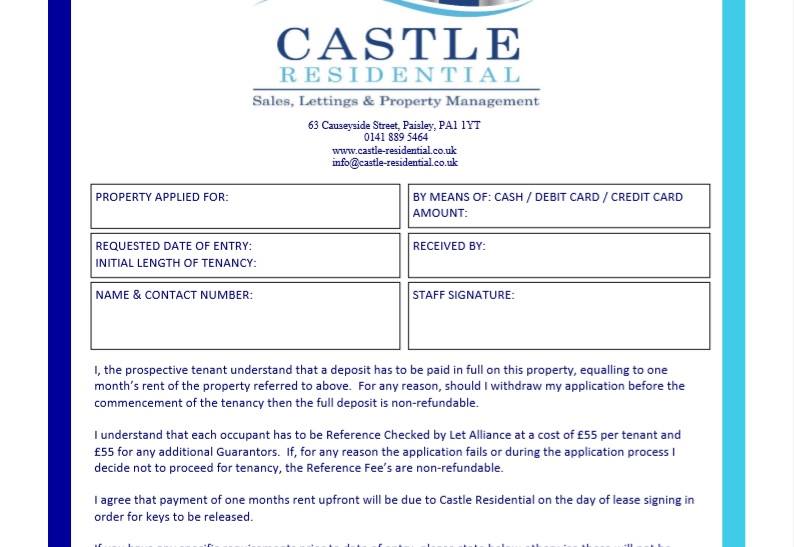 As a tenants’ union, we defend our members against unscrupulous letting agents charging illegal fees and slum landlords letting out properties that are literally falling apart and are a health hazard.

In September 2017, we first encountered Castle Residential with what quickly became known as the ‘mushroom house’. Lauren Lyttle and her partner were charged £835 per month to live in a flat which had two rooms condemned by environmental experts Rentokil as it had poisonous mushrooms growing in it. This is what Lauren recounts from her experience:

“The intimidation tactics from both the landlord and the letting agent has been insane. I’m missing work, my boyfriend’s missing college and I’ve been put on two different anti-anxiety medications, I don’t know what else to do.’’ 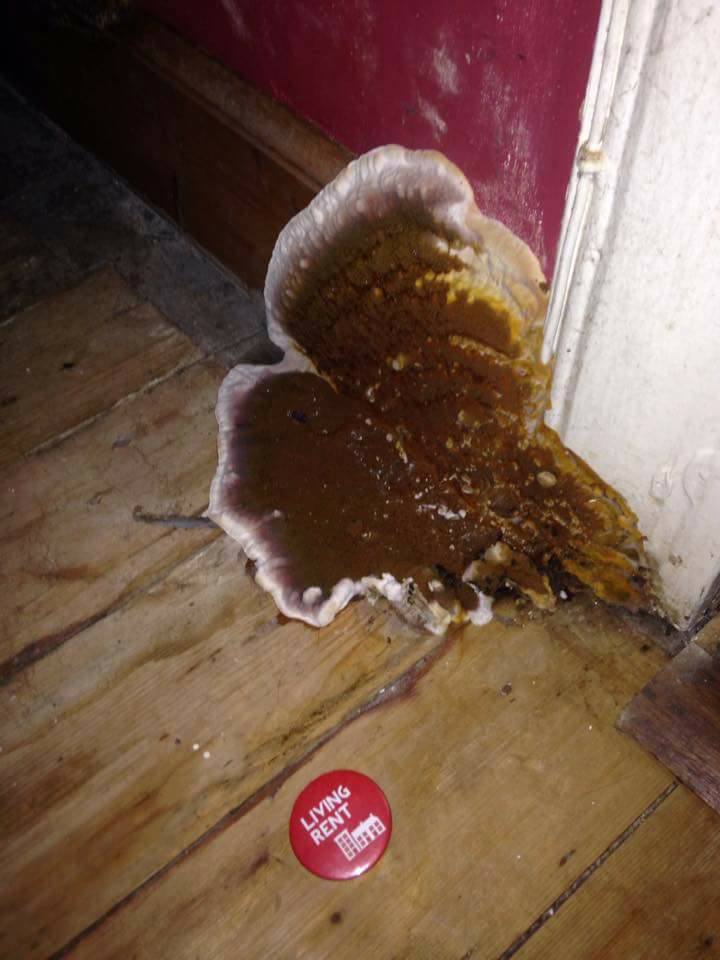 Following the revelations from our STF survey, we started to pursue cases of illegal fees charged by Castle Residential. Members Matthew, Sarah, Georgina and Thomas were collectively charged £440 for referencing and guarantor fees. When initially confronted about this, Castle Residential formed a brick wall between themselves and their tenants – refusing to even discuss the matter. However, when our member, Matthew linked up with the Living Rent negotiating team, the fees were refunded shortly after a visit to the letting agency’s office. Matthew recalls:

“... After being made to bid on the flat due to other people being interested I started to doubt the estate agents due to mistakes with dates in emails and even on the listing. So after being charged £440 between the four of us in the flat I decided to speak to Living Rent to see if these were legal… I was grateful for their knowledge of the law and ability to handle these situations. Matt McCusker (Castle Residential manager) refused to talk about it and claimed to be busy despite having said I could come in to talk about it. He showed no effort to actually help me, the client, out and instead appeared sly, arrogant and unashamed… [After the meeting] he obviously realised it wasn’t worth his time, hence he refunded it, but still denied any wrongdoing on his part. Clearly he had no guilty conscience of ripping people off it seemed.”

In the light of what appeared to be their standard practice of charging illegal fees, it did not take long for more cases involving Castle Residential to surface. In November we heard from members Kitty, Josie, Janie, Dylan and Georgia about reference and credit check fees they were charged by the letting agency in 2017, totalling £550. A case we are still in the midst of fighting, as it can be assumed that Castle Residential are now concerned about opening a can of worms in regards to the thousands of pounds worth of illegal fees charged to both present and past tenants over the years. Despite numerous attempts of engagement from their tenants and Living Rent, they have at every point refused to even discuss the matter. Member Kitty recounts:

‘’While we lived there they were slow to make repairs and the flat was very damp. We knew we would have trouble getting the deposit back, despite the flat being cleaner when we left than when we moved in, but we were really shocked when we saw that they wanted to keep £1120 of our deposit. We emailed them to ask why and they sent us an invoice for £860 from a company called Alexandra Maintenance. They also sent us a cleaning invoice for £260, including the cleaning of ‘bedroom 6’, which did not exist.’’

After conducting their own research, Kitty and her fellow tenants realised that the so-called ‘Alexandra Maintenance’ company had been dissolved in 2015. Understandably, they were shocked by this finding and worried that Castle might be doing this to other tenants – prompting them to contact Living Rent. Kitty added:

“It’s the same with the illegal fees – they prey on people that don’t know any better and then say that you can’t have them back because you agreed to it. We think Castle are unscrupulous and we are really glad that Living Rent are helping us do something about it.” 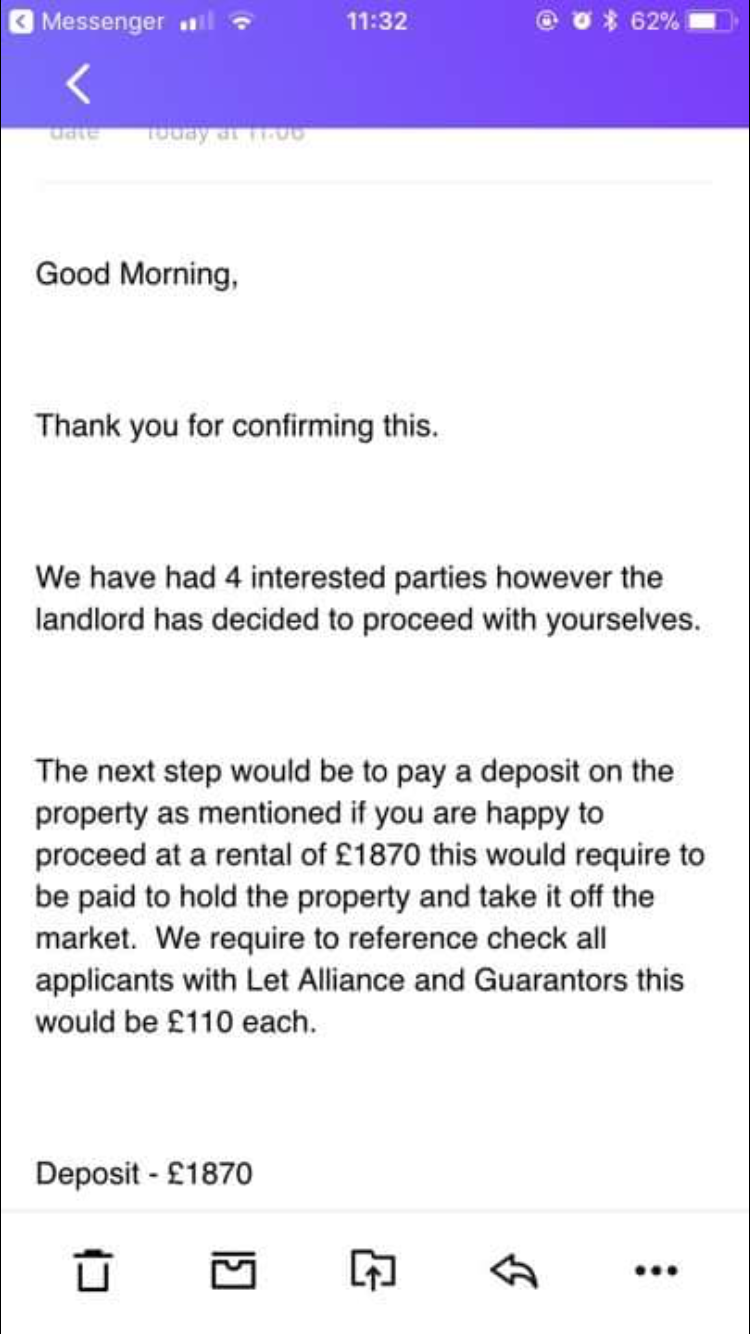 Castle and SAL: partners in crime

Back in September 2018, Living Rent met with the Scottish Association of Landlords (SAL) to discuss with them a collective agreement drawn up by our members to help tackle the issue of illegal fees as well as the countless offences of their member, Castle Residential. When confronted with the evidence of their member letting agency charging additional premiums as a condition of tenancies, SAL head John Blackwood, admitted that it was compelling. Despite their promises to look into the matter, five months later we have seen no discernable action by the SAL and it would appear Castle residential continue to charge these premiums with impunity. 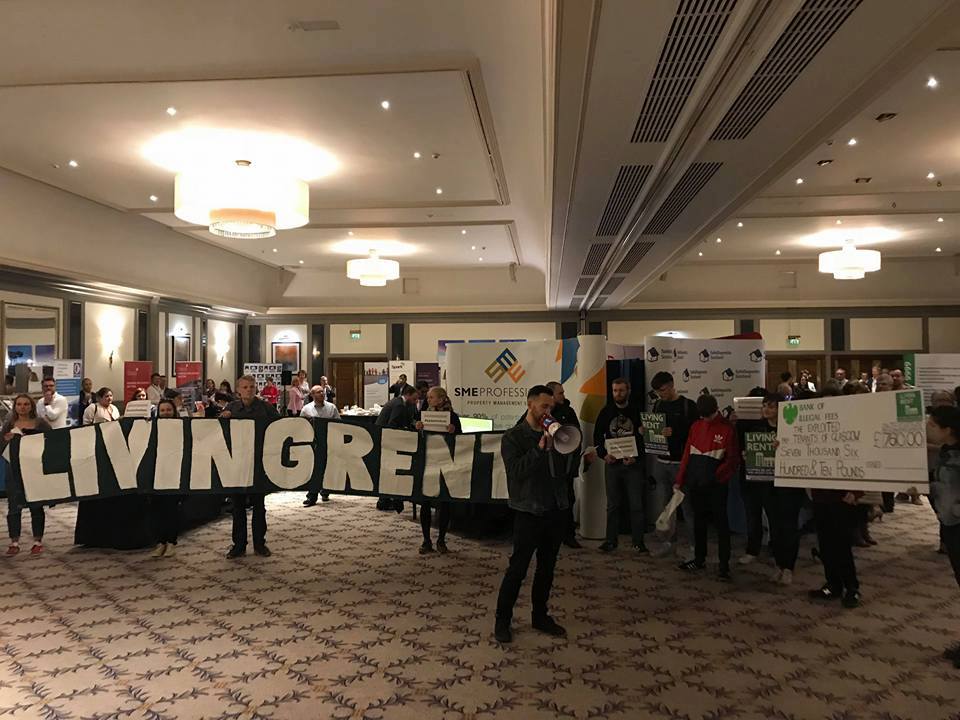 We demand a full repayment to our members!

Living Rent now demand that Castle Residential are held accountable for their unlawful practices, starting with the full repayment of £550 to our members. Amidst a critical housing crisis that sees the lawful exploitation of tenants through sky-high rent, sub-standard accommodation and unjust evictions, our demands are far from radical. The indifference shown by Castle Residential at such a basic demand as to operate within the law goes to show how deep-rooted this issue is. Our research and members’ testimonies together paint a picture of a letting agency with flagrant disregard for its tenants welfare. We call on Castle Residential to refund the fees in full, apologise to their tenants for the time and money wasted and cease charging these premiums all together. We call on all letting agents who do not charge these fees to sign our collective agreement to help us stamp out the practice.

3- Read a full account of the story here: https://www.commonspace.scot/articles/11701/tenants-health-scare-after-nightmare-ordeal-mushroom-infested-flat