We’re out for power, and all the locks and landlords in the world won’t stop us smashing through!

Our report from our well-attended and inspiring 2019 National AGM. 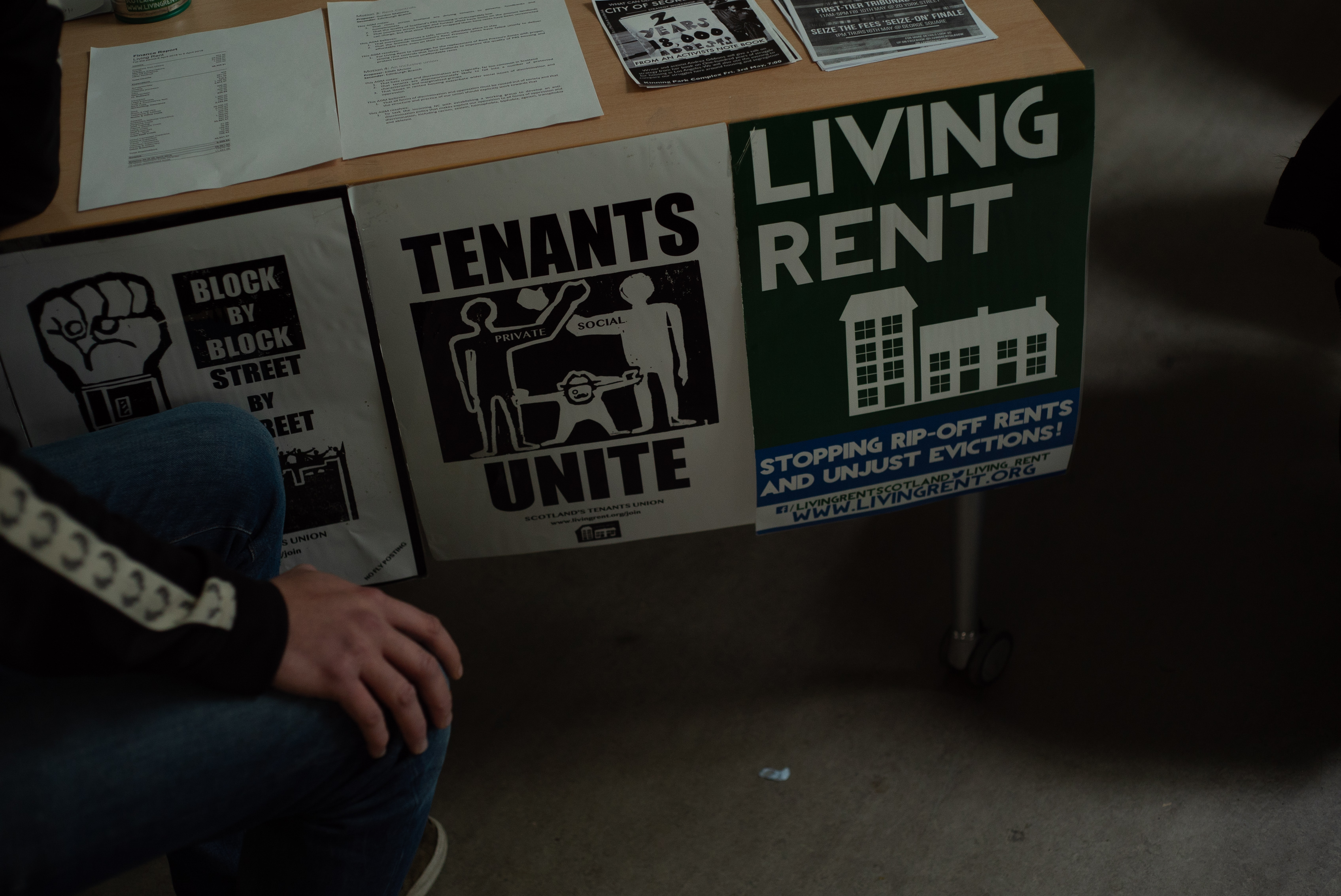 Building a union is hard work. Yes, there is a global housing crisis that is affecting more and more of us; but it’s another issue to get people to understand why their rent is going up for a poor quality flat and then organise them into a entity that actually starts changing the system that normalises the situation. Sometimes however, amidst the political morass and apathy there is a spark, a spark that lights a fire. On the 27th of April, in an old victorian trade union building soon to be converted into student flats, that fire was vigorously stoked as tenants from all over Scotland descended upon Glasgow for Living Rent’s National AGM. As we’ve established before, Living Rent doesn’t do boring AGM’s. We’re here to empower tenants, to make them think and engage in the housing struggle for themselves. On that sunny Saturday afternoon, we lived up to that promise, reflecting on our campaigns over the past year and outlining a future of a Scottish tenants’ union of not just hundreds, but of thousands.

The day started off with a welcome from National Committee member Sonja, who commented that seeing people having to queue to get in to the event was a sign that people believed in what Living Rent does and want to be a part of it. Next was a reflection by Glasgow member David, who outlined the success of Glasgow’s No Evictions and Seize the Fees campaigns as well as the growth Glasgow is seeing organising individual neighborhoods. He was followed by Edinburgh member Emma, who detailed Edinburgh’s expanding work tackling short-term lets as well as the challenges of creating a union that fights for everyone's right to decent and affordable housing, irrespective of their political orientation. 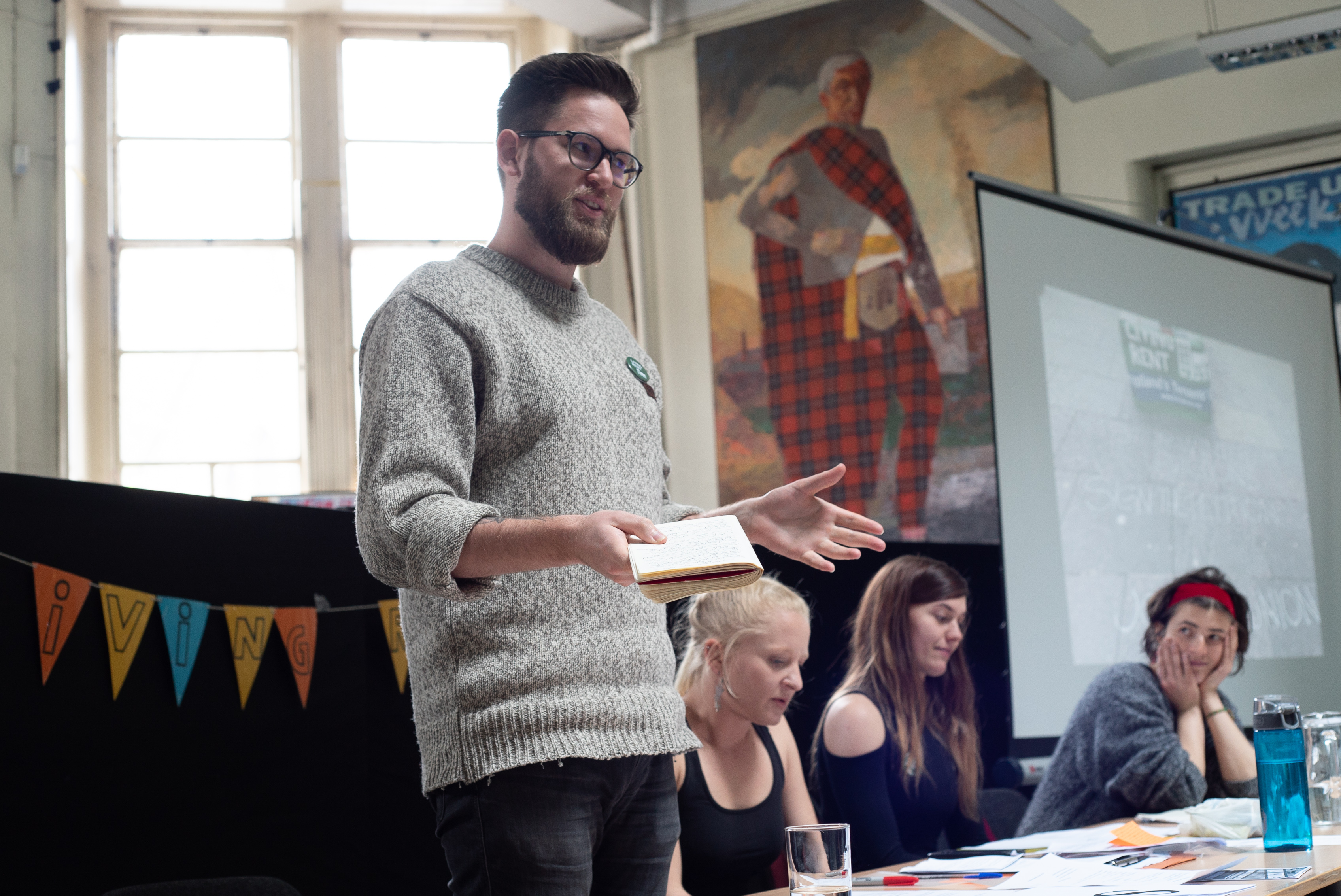 The next session was comprised of reviewing our annual report, where we heard from our chair Emma and our treasurer Jon, about the organisational health of Living Rent. For a small organisation, we’re exhibiting consistent growth and solid finances. As our senior organiser Sean announced to the room, we’re creating momentum in Scotland because we’re meeting people where they are, in their neighborhoods, unapologetic about our radical aims. 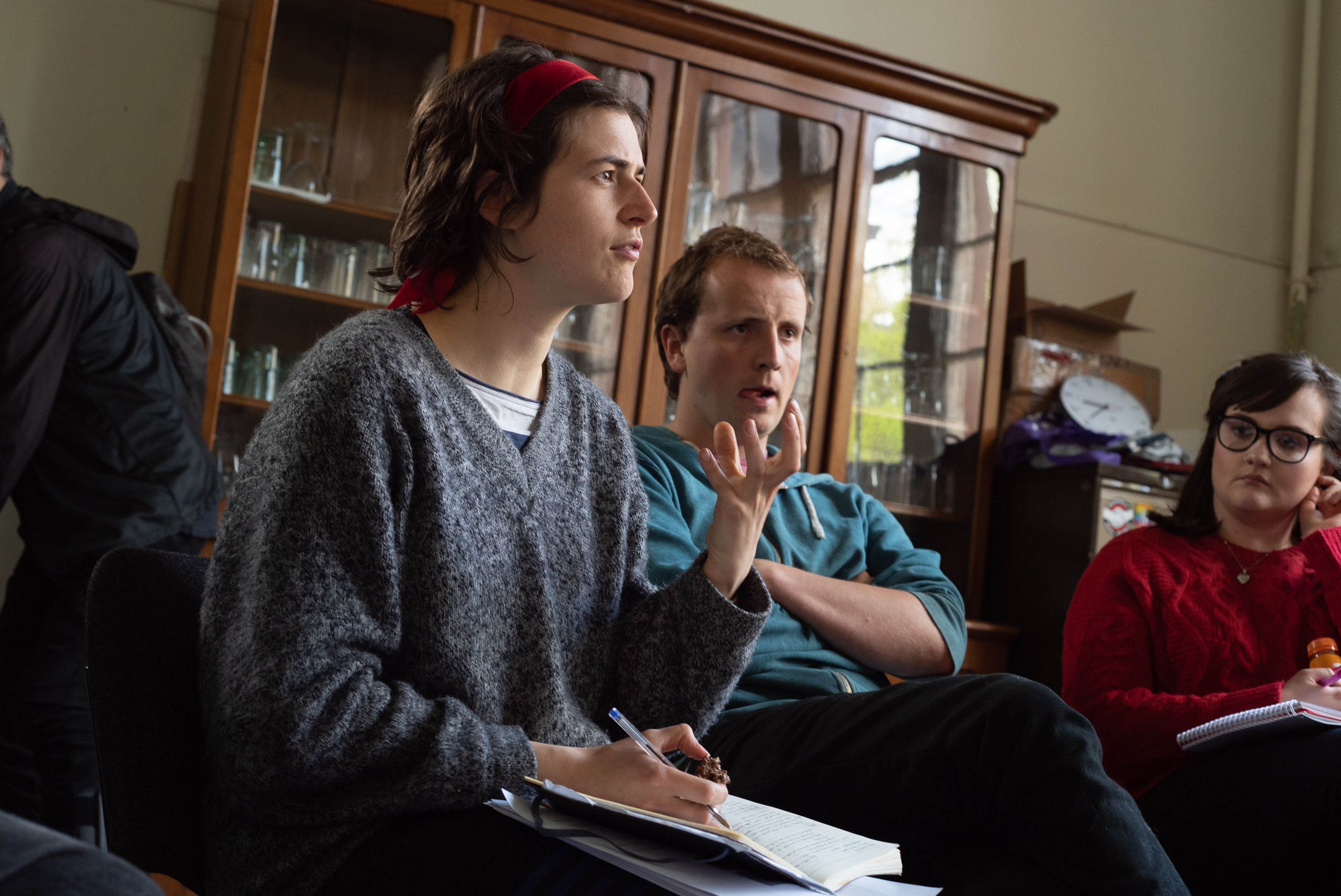 We then saw the election of our new National Committee with the addition of four new members - David, Eilidh, Gordon and Ellinore - and the re-election of three previous members - Jon, Sonja and Emma. They were all eager to demonstrate that they’re ready to make Living Rent one of Scotland’s strongest political forces and fundamentally change the face of Scottish housing.

Shortly after, the room voted on our motions. This year’s motions (put forward by the branches and the National Committee) show the evolution of Living Rent and our desire to expand beyond the private rented sector and into the variety of tenures that tenants inhabit. Two of the motions reflected that, one calling for the establishment of a substantive position on council housing while the other called for the adjustment of our constitution to remove the focus on mainly private tenants. The other three motions set forward our vision for the future: to campaign for the implementation of the rent controls Scotland needs, to develop a policy to foster a more inclusive union, and to lay out a defined branch expansion model. All five motions passed (with minor revisions to the latter). 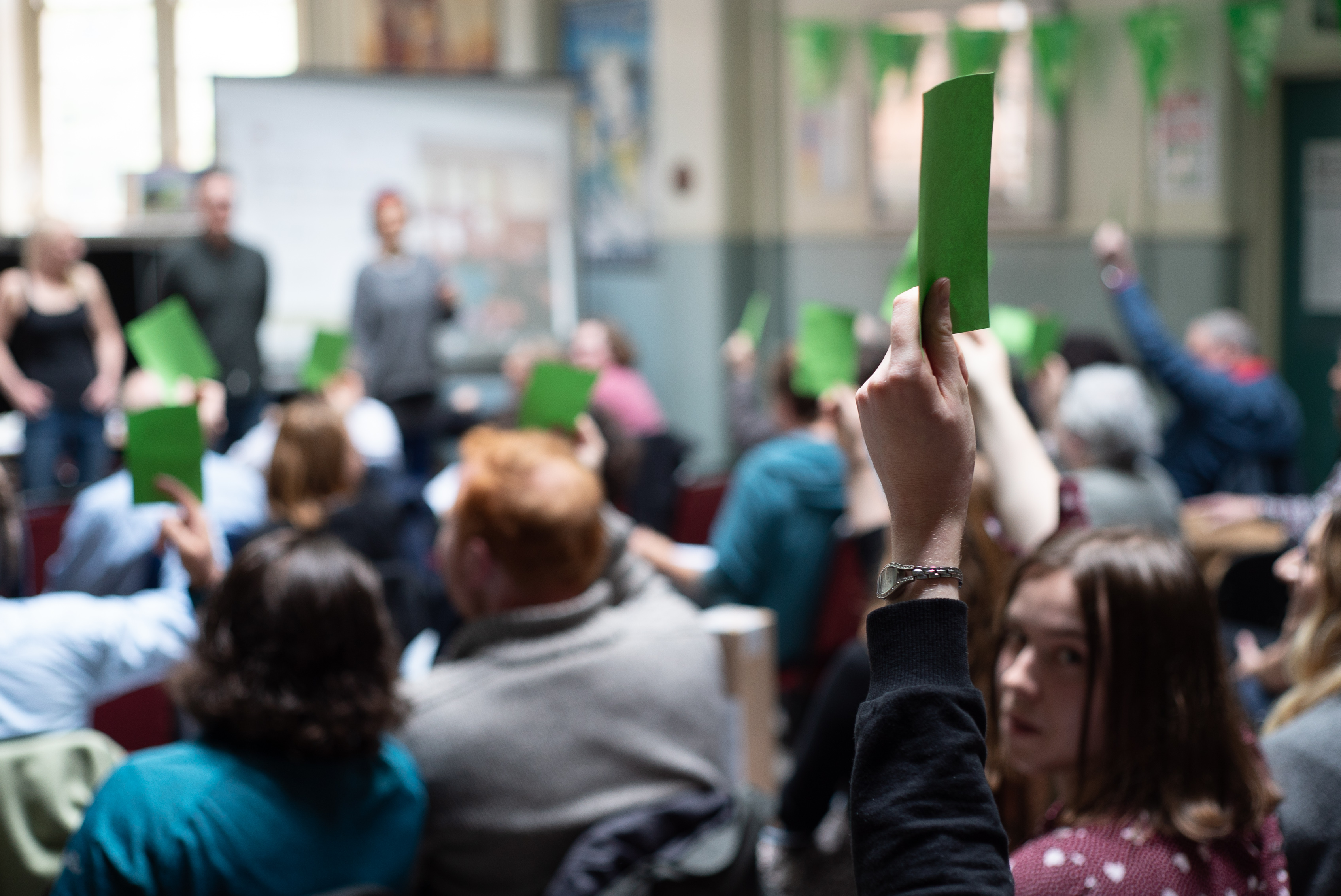 The last hour of the day was spent engaging our members in three breakaway workshops focusing on Building Neighborhood Power, Campaigning for Rent Controls, and Becoming Housing Experts. Building Neighborhood Power focused on the practical approach of engaging communities to address their housing needs. Living Rent’s real power is rooted in the community, but that entails being integrated our communities and familiarising ourselves with their complicated and changing nature. The Campaigning for Rent Controls workshop focused on a twofold approach to making effective rent controls a reality via parliamentary means and a mass movement. Both approaches have different benefits and drawbacks, but ultimately, a variety of approaches has to be adopted to ensure that what we are democratic and effective. Finally, Becoming Housing Experts entailed utilising both theory and the practical skills. From understanding how housing is commodified under capitalism to different strategies to resist it, there are various methods to making sure Living Rent members know what they’re talking about and how to change it. 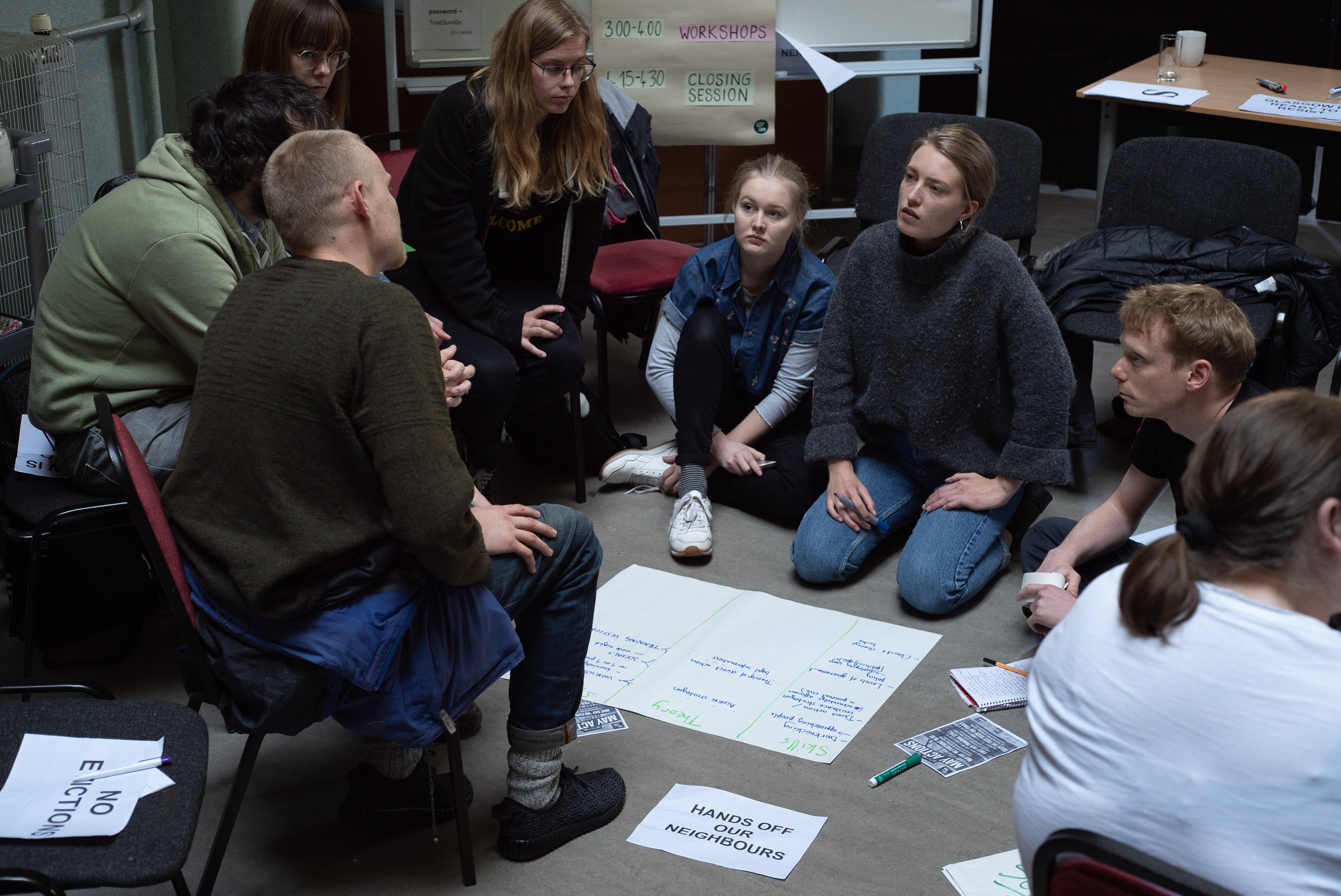 With our members brimming full of new tactics to bolster the Scottish housing struggle, we came together again with for a rousing conclusion from Sonja. It’s time to re-politicise housing she declared. No longer is the home to be relegated as secondary to the workplace. The neighborhood is the new factory and it’s time to recognise that those most excluded in society feel attacked right in their home. It’s also time to show everyone that we’re not in a crisis. Under capitalism, housing is not designed to provide homes for people; it is rather produced and distributed as a commodity to enrich the few. With stagnant wages, slashed benefits, and rising rent, the insecurity of housing is making us feel isolate, alienated, and powerless! To rectify this, as Jane McAlevey succinctly put it: “We need to understand what power is, where it comes from, how to accumulate it and how to tear it down!” This is why Living Rent is a militant union. We are not here to provide a service or act as a charity. We demonstrate in practice how tenants working together can change their reality. We are building a culture where mutual organising and support transform weakness into strength. 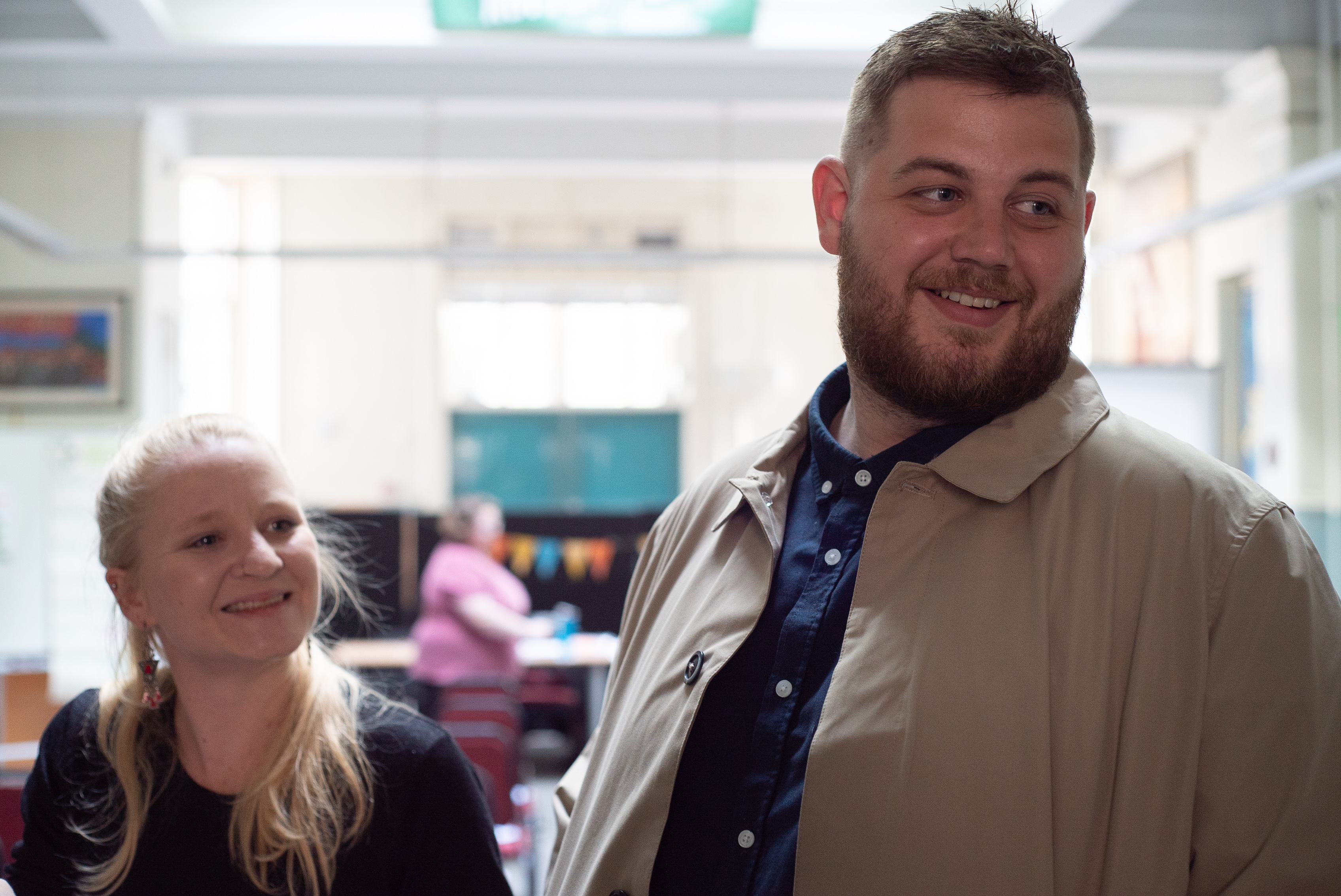 This year’s National AGM was a show of that strength, with over a hundred tenants turning out to fight for something better. To conclude with Sonja’s final words:

In January 2018, we were a union of 200 members, today we have over 500. From organizing dozens, we now organise hundreds, but we want soon to be organising thousands. Not only is it necessary, it’s possible. We don’t want the crumbs, we want the cake! Living Rent is out to win, we’re out for power, and all the locks and landlords in the world won’t stop us smashing through. There’s power in a union!

A big thanks to…

The STUC, SEAD fund, Sana for providing childcare, Kathleen and others for providing food, and to all our members who made it an incredible day! 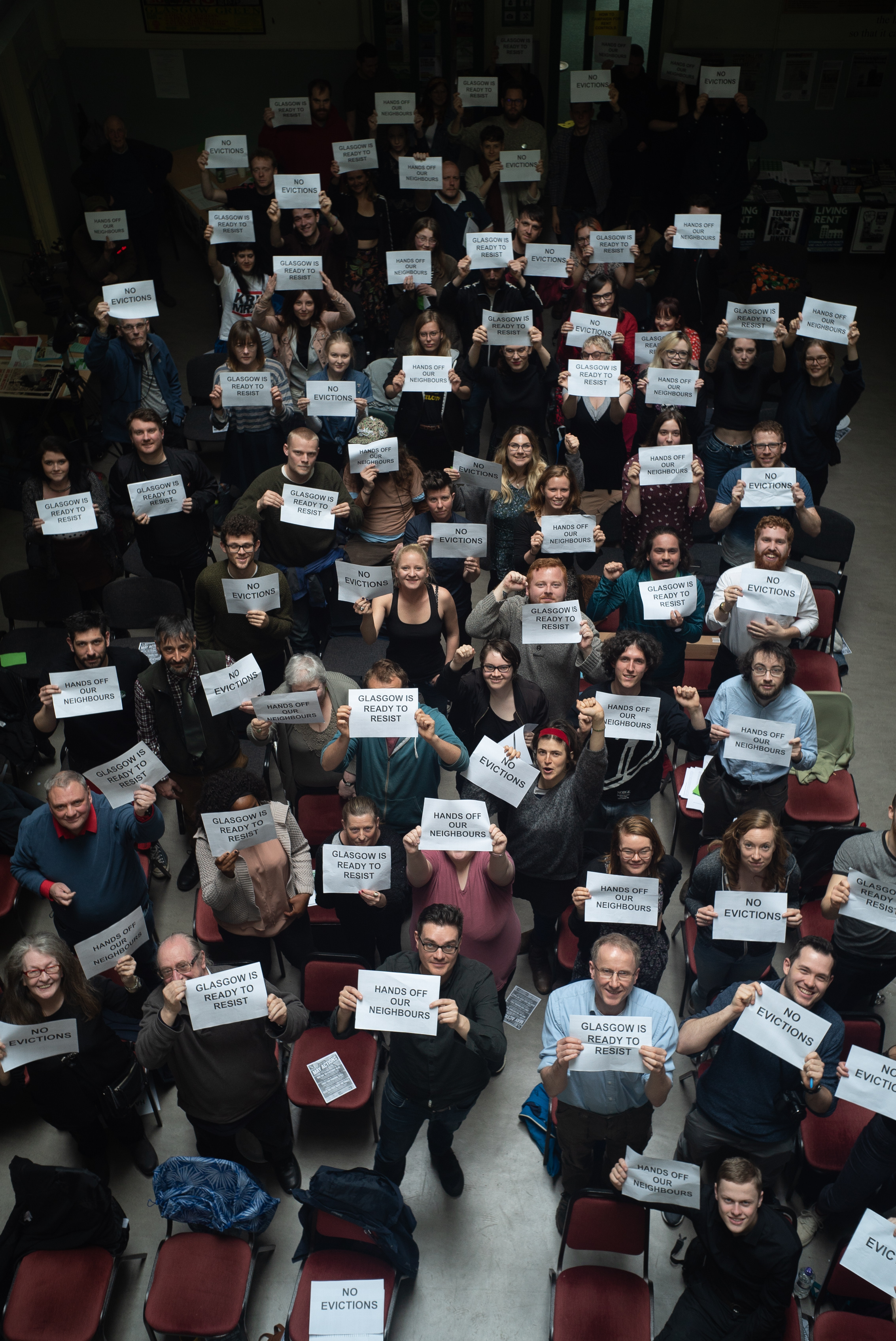